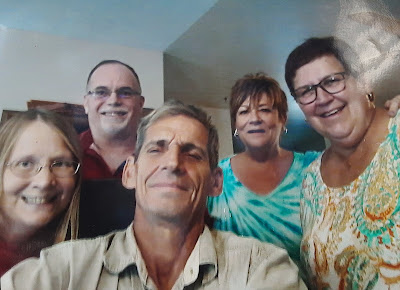 Left to Right - Ruth & Dean Leferink, Allen, Diane Reppert & Sandi Wise.
Allen Wise ran Shady Oaks Gather All, an old-style roadside plant nursery on Highway 301 in Sumterville where he offered a mix of native, edible and Florida-friendly plants. His many loyal customers will continue to remember what he taught them about the plants that he nurtured. By making Florida native plants available to homeowners, Allen was a wonderful advocate for attracting pollinators and supporting butterflies in home landscapes. While volunteering as a Sumter County Master Gardener, Allen annually put together a native plant exhibit at the Sumter County Fair. He was always eager to donate his time at native plant shows and for 20 years was a faithful member of the Florida Association of Native Nurseries (FANN).

He was a founding member of, and for years served as an officer for, the Sumter County Chapter of the Florida Native Plant Society (FNPS), which disbanded soon after Allen found he had cancer in 2019. As a local property manager for his south Florida friends, he demonstrated his wide-ranging skills in carpentry and mechanics. He showed remarkable perseverance and strength because he did all of this from his wheel chair or using crutches since he was afflicted by a rare disease, hereditary spastic paraplegia or HSP/FSP.

Twenty-five years ago, Allen moved to his home on Route 301 after working as a chef in Miami. He left south Florida after his fiancé, Jewel Hammer, was killed by a drunk hit-and-run driver. Allen was born December 22, 1950 in Pennsylvania where he and his siblings were separated as children. His sister Sandra Wise finally found him 4 years ago and introduced him to his other sister, Tara Prentice. Although they were reunited for only a few years, being in touch with long lost family was a great source of connection for Allen. He also cherished his Leferink family, Ruth, Dean and his nephew, Kenny, who live in Dade City.

Allen was proud to have, at last, kicked the smoking habit 12 years ago. He died at Cornerstone Hospice on October 6 2021 from lung cancer.

He was a resource to countless home gardeners who will miss his presence on Route 301; passersby could observe Allen diligently tending his plants from his motorized chair. But they will forever remember him by the shrubs, trees and flowers that prosper and bloom in their yards. Allen's friends have established the Allen G. Wise Research Fund to honor his memory. Donations fund a scholarship within the Native Plant Horticulture Foundation to support research projects that expand and strengthen the native plant industry that Allen loved.