Showing posts from April, 2016
Show all

Where Have All the Pygmy Pipes Gone? 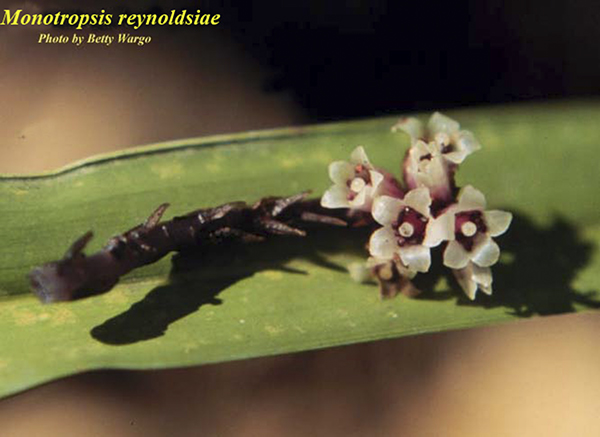 By Carmel van Hoek I haven’t heard any mention of pygmy pipes in quite a while, and the last collections, according to the USF Plant Atlas , were made in 2012 in Pasco and St. Johns Counties. I wonder if these little endemic, state endangered obscurities are taking another sabbatical as they have sometimes done since the late 1800’s when they were first discovered. Photograph by Betty Wargo. Courtesy of The Atlas of Florida Plants Photograph by Rita Lassiter . Courtesy of  The Atlas of Florida Plants In December of 1884, in east Florida near St. Augustine, Mary C. Reynolds found several small plants that obviously lacked chlorophyll as they displayed no hint of green. They looked somewhat like Indian Pipes, Monotropa uniflora, except that these plants were smaller, some barely visible above the leaf litter. And they were suffused with colors of pink and pale lavender instead of being ghostly white. Instead of a single flower atop the stem as in Indian Pipes, these stem
1 comment
Read more 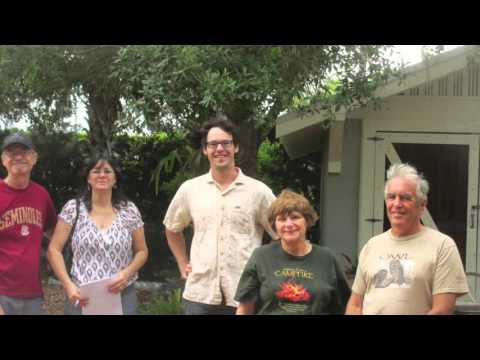 Produced and Submitted by Mark Kateli, Tarflower Chapter This was yet another great year with the "sister society" collaboration for the Central Florida Native and Wildlife Friendly  Yards Tour .  Florida Native Plant Society Tarflower and Cuplet Fern chapters, and the Orange Audubon Society, host this event annually. It's a great exercise to help strengthen our bond around a common mission. This year, we had well over 100 attendees.  A special thanks to noted environmental journalist Kevin Spear that published an article in the Orlando Sentinel that promulgated the event to people outside our usual sphere of influence. Being Tarflower chapter Treasurer, I firmly believe that as we prosper, so will our neighboring chapters.  I look forward to hearing from chapters that border Orange County- Lake, Osceola, Brevard, Volusia, and Polk chapter Treasurers- for more collaborative ideas that amplify attention to Central Florida and it's unique native
2 comments
Location: Florida, USA
Read more 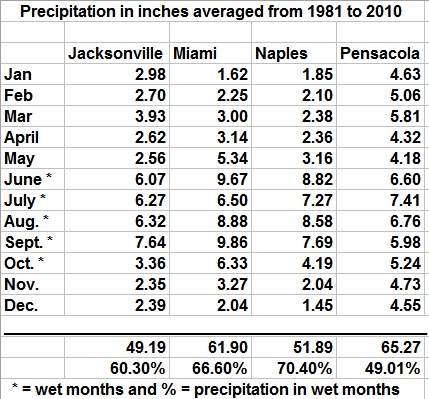 Florida's 5-month wet season produces 50% to 70% of annual rainfall. (Data from NOAA) by Ginny Stibolt Too much rain or not enough Florida's 5-month wet season (aka hurricane season), from June through October, accounts for almost 2/3 of our rainfall. In general, the more southern counties experience the more dramatic differences between their wet and dry seasons. In contrast, New York City's rainfall is more evenly distributed from about 3.5" to 4.5" each month. Our weird patterns of rainfall help make the case for using Florida's native plants in our landscapes. Also we receive huge amounts of rain all at once on a regular basis. In most cases, all that excess water is rushed from our properties out to the streets where our stormwater then ends up in the nearest waterway. At that point it's no longer just water, but it will have collected pollutants from our landscapes and the streets. This is called nonpoint source pollution, which is not r
Post a Comment
Read more

Is the Florida Native Plant Society Conference for Me? Submitted by  Sande Habali,  Pawpaw Chapter Many new members ask themselves this same question and many other questions like it. I know because I used to ask them myself.   Maybe you’ve wondered about the conference as I did. There are many people in my group who know so much about plants. They are “experts” and I’m not.  Visit the Park of Honor 755 Olive Street,  South Daytona.  The Pawpaw  Chapter maintains a section in exchange for a meeting place  at the  nearby Piggotte Community Center.  Just enter the park,  turn right and look for the pollinators! While it is true the Florida Native Plant Society is a scientific based organization (and aren’t we glad it is?), the rest of us get the benefits of all the science based information out there. With the help of FNPS, we can make decisions about our yards, our neighborhoods, and our general community based of facts.  The conference is the best place to learn from the real experts! It is a huge time commitment
Post a Comment
Read more
More posts