Showing posts from July, 2019
Show all

National Moth Week: Time to Wrap It Up 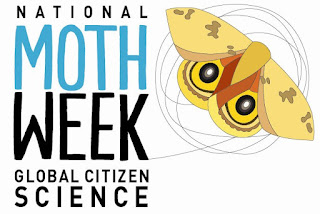 Well, folks, this is it: The final day of National Moth Week 2019. Thanks for following along with us as we explored these flying beauties that help make this planet such a great place to hang out. Their role in diverse ecosystems benefits so many other species, from the many native plants they pollinate to the songbirds that feed them to their young. And their beautiful presence certainly provides humans joy when, say, a huge green Luna moth flutters across a summer porch or a dainty Ornate Bella moth skitters underfoot in the grass. There’s still so much to be learned about the moth world. For example, it was thought for years that only one moth pollinated the legendary ghost orchids of the Everglades, but earlier this month National Geographic shared news about a variety of sphinx moths slurping nectar from the blooms . If you haven’t had a chance to go moth hunting yet, there’s still time. According to National Moth Week, “Studying moths at night is as simpl
Post a Comment
Read more 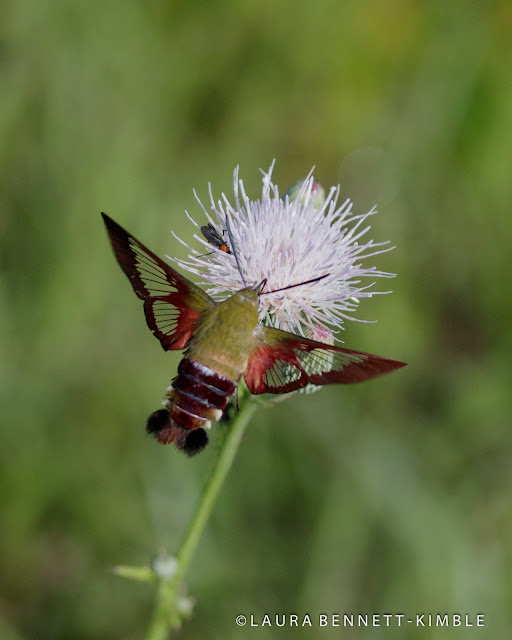 Adult Hummingbird Moth ( Hemaris thysbe ) © Laura Bennett-Kimble On a springtime hike at Little Big Econ State Forest (Seminole County, Central Florida), my companions and I spotted a hummingbird moth working its way from thistle plant to thistle plant. I clicked my camera’s shutter button while standing as still as possible. The morning light was perfect, and the moth was not shy. It ended up next to me on a tall thistle, and the above image is one of the resulting photos. The hummingbird moth—along with the similarly named hummingbird hawk moth that lacks transparent wing spots—is a member of the sphinx moth family (Sphingidae), which also includes the Pluto Sphinx moth. These creatures resemble hummingbirds in both their shapes and movement as they hover while sipping nectar from blossoms. The beating of their wings can even make a humming noise, similar to that of the birds. You can attract the moths to your neighborhood with both nectar and larval host plant
Post a Comment
Read more 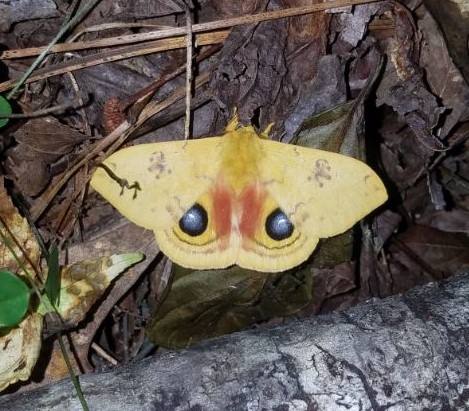 Adult Io Moth with wings spread to show eyespots. iNaturalist observation by ceharlan CC BY-NC 4.0 When a kid, I learned a bit about mythology through my Golden Guides on insects, butterflies, and moths. These small, battered reference books went with me most every time I explored the fields and woods around my house, and they helped instill a lifelong interest in entomology. Adult Io Moth with wings tucked in Miami-Dade County. iNaturalist observation by miaminaturegirl CC BY-NC 4.0 Why am I telling you this? Because that’s how I learned about the Io moth, a beauty named after a mythological Greek maiden, according to my trusty guide. However, according to subsequent research, Io was more than a simple maiden—she was a goddess, first priestess of Hera and wife of Zeus, god of thunder and lightning. That’s kind of a big deal. The Io moth is kind of a big deal, too, with its beautiful wing spots, attractive coloration, and wingspan up to more than 3 inche
Post a Comment
Read more 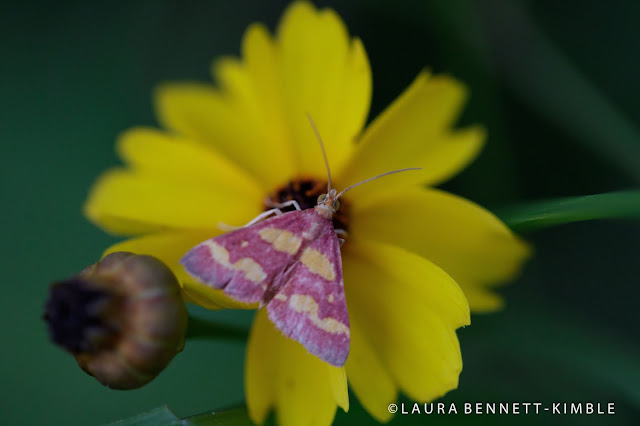 Coffee-Loving Pyrausta moth ( Pyrausta tyralis ) © Laura Bennett-Kimble Gardeners seeking Florida native plants often gravitate to the glossy-leafed, shade-tolerant wild coffee ( Psychotria nervosa ) shrub, which also happens to be the favorite larval host plant for today’s moth, the Coffee-Loving Pyrausta. This is a very small, subtly colorful moth with a wingspan of around .75 inches, and its nectar sources are fairly wide-ranging, from species of Bidens to Coreopsis and beyond. But when it comes to where it prefers to lay its eggs, Psychotria nervosa is where it’s at. The plant is only found in the Florida peninsula and isn’t suitable for the chillier winters of the Panhandle. However, according to BugGuide , the moth’s habitat ranges from Florida to Arizona and as far north as Illinois and New York. This means that the moth is using other larval host plants, too. Keep in mind, you’ll want to leave the wild coffee for the Coffee-Loving Pyrausta moths and fr
1 comment
Read more 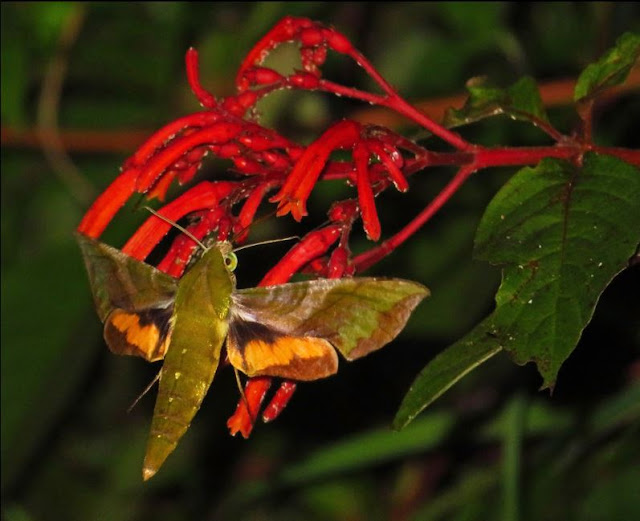 Pluto Sphinx Moth ( Xylophanes pluto ) nectaring on one of its host plants, Florida Firebush ( Hamelia patens var. patens ). Photo by iNaturalist user Al Tuttle, CC BY-NC 4.0 While the celestial body of Pluto may have been demoted from a planet to a dwarf planet over 10 years ago, the Pluto Sphinx moth continues to earn respect as a nocturnal invertebrate named after none other than the Roman god of the underworld. It’s a standout at every stage of its lifecycle, too. Have you ever been gardening and been startled to see two buggy eyes staring at you from the leaves? It might’ve been a Pluto Sphinx moth caterpillar, which has a great defense mechanism in the form of two large fake eyes that make it appear much more formidable than it actually is. Moths like the Pluto Sphinx deserve credit for being important pollinators for many wild and cultivated plants, including wild verbena. Pluto Sphinx Moth caterpillar ( Xylophanes pluto ) in Costa Rica. Photo by iNat
Post a Comment
Read more 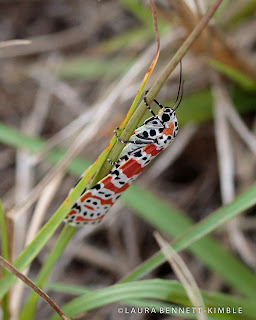 Ornate Bella Moth ( Utetheisa ornatrix ) © Laura Bennett-Kimble The dainty Ornate Bella moth has surprised more than one casual observer with a flash of its distinct pink wings—typically visible only when in flight. In addition, markings also can boast yellow, orange, black and white variations, which make it pretty flashy in the moth world. This lovely species is a small one, with a wingspan of only 1.25 to 1.75 inches. And when it folds its wings tightly against a blade of grass, you’ll be hard pressed to spot it. Fortunately, the Bella moth isn’t nocturnal like many of its moth relatives, so you’ve got a better chance of seeing it flitting through the grass in the daylight. Host plants for the moth’s caterpillars are both native (four species) and non-native (10 species) Crotalaria, known as rabbit bells, as well as rattlebox for the rattling sound of ripened seed pods. This leads to another common name for the Bella moth: rattlebox moth. Interestingly, “bec
Post a Comment
Read more 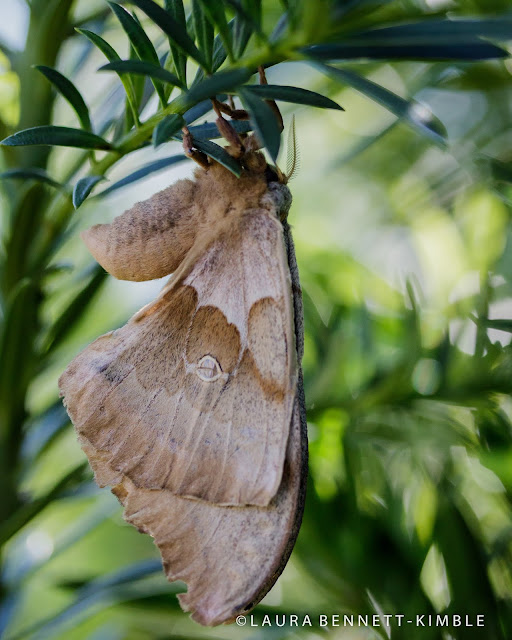 Polyphemus Moth ( Antheraea polyphemus ) © Laura Bennett-Kimble Fun fact: Unlike butterflies, moths have fancy, feathery antennae — what the Xerces Society described as “the most flamboyant in the pollinator world.” A species that exemplifies that characteristic is the burly Polyphemus moth. Along with the Luna moth, the Polyphemus is one of the larger North American moths, with wingspans varying from 3.5 inches to more than 5.5 inches. Named after the one-eyed giant of Greek mythology, the Polyphemus displays a distinct eyespot on the top of each hind wing. Also like the Luna, the Polyphemus does not eat as an adult and prefers hanging out in deciduous forests, although it can be seen in suburbia if the right trees are present. Polyphemus caterpillars enjoy munching the leaves of numerous tree species, including Florida’s oaks (Quercus sp.). Adults emerge from cocoons such as the one shown here, and, according to Butterflies and Moths of North America , mate soon
Post a Comment
Read more 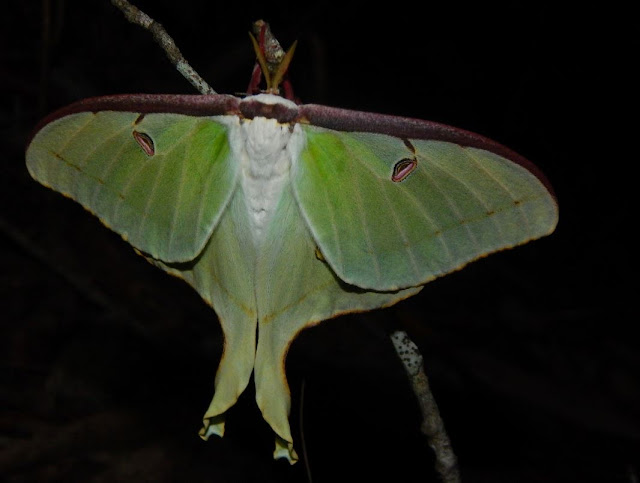 Photo of a Luna moth ( Actias luna ) by iNaturalist user iamashark in Aucilla WMA in Jefferson County on July 27, 2018 CC BY-NC 4.0 Do you remember the first time you saw a Luna moth? For many of us, it was an exciting childhood moment on a warm, humid summer night. With a wingspan up to 4.5 inches, this large, elegant green moth is a sight to behold. Named after the moon, the Luna moth is found in the eastern half of the U.S. as well as in southern Canada — nowhere else on the planet. The moths themselves do not eat, so caterpillar host plants are crucial to the survival of the species. Caterpillars feed on a variety of trees, including these native Florida trees: persimmon , sweet gum , hickories, walnuts, and sumacs. Not surprisingly, these moths are typically found in deciduous hardwood forests. While not a plant pollinator, this member of the North American silk moths (Saturnidae) provides service to ecosystems as food for bats, owls and other nocturnal pr
Post a Comment
Read more 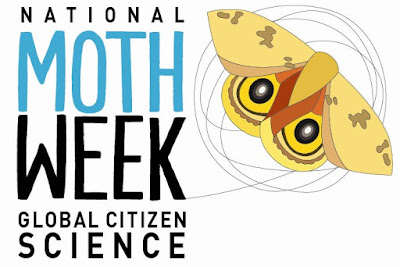 Butterflies may be considered the showiest of winged insects, but moths are pretty awesome, too. And there are a lot of them. In fact, The Xerces Society for Invertebrate Conservation says about nine moth species exist for every one butterfly species globally! In celebration and appreciation of these typically nocturnal creatures, the 8th annual National Moth Week is July 20–28. Here at Florida Native Plant Society, we’re going to highlight seven moth species this week—one per day—that have lifecycle relationships with our native plants . We’ll kick it off tomorrow with a post about one of the larger, more well-known moths, the beautiful Luna. National Moth Week events are being organized around the globe, and online registration is available for group and individual activities. You can also participate in a citizen science project through iNaturalist. This project provides a place to share photos and contribute to the body of knowledge about moths. So far, more
6 comments
Read more
More posts