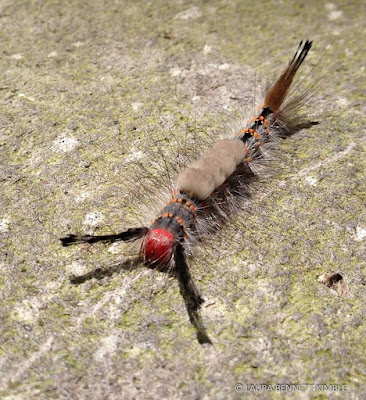 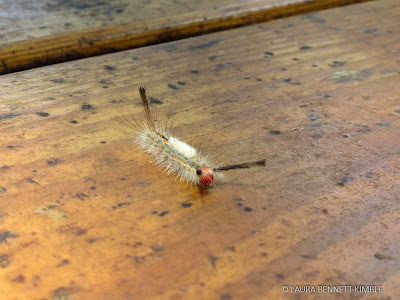 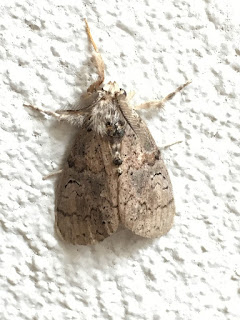 We all have our defense mechanisms, whether it’s cracking a joke when someone says something inappropriate to you or jumping out of the way when a cyclist roars past you without saying, “on your left.” In the natural world, defense mechanisms can get a little more aggressive, as anyone who’s inadvertently disturbed a wasp nest can attest.

Other defenses are just part of an insect’s physiology. Take the spines and spikes that adorn many caterpillars. Are they trouble or not? It depends.

The Royal Walnut Moth (Citheronia regalis) caterpillar has formidable spikes and horns that apparently are not toxic to humans, but they sure make you pause before grabbing one. However, cute little caterpillars of the three Tussock Moths found in Florida can cause a world of trouble when you encounter their fuzzy spines.

“Pruritic (itching) dermatitis due to tussock moth caterpillars has been reported to be a problem at child day-care centers and elementary schools in Florida,” according to University of Florida/IFAS. Allergic reactions can cause more severe reactions, as well.

Interestingly, contact with the cocoons produces the same irritating symptoms, because the caterpillars use their spines, or hairs, to create their cocoons – and those tiny venomous hairs can maintain their potency up to a year or more, if you touch one of their cocoons. Touching a cocoon certainly is possible, considering the caterpillars like to spin their cocoons in nooks and crannies around our homes, boats and other inconvenient places, as well as in protected spots in trees and other vegetation.
Enough about those unpleasant characteristics! Aren’t those caterpillars pretty? And, these species have a special life cycle, with female tussock moths sporting tiny, ineffectual wings that keep them close to their cocoons, since they cannot fly.

To counter that, females exude pheromones to attract males, and they often lay eggs on their own cocoons, which, remember, still have potent, protective hairs to defend vulnerable eggs from predators. And, when the eggs hatch, the tiny larvae “feed on the remaining egg mass and then spin a silk thread that they use to ‘balloon’ for dispersal,” UF/IFAS says. Since the adult females are flightless, this serves as a great way for the little caterpillars to spread out from their original homes.

They’ve been on entomologists’ radar for decades, too, with O. leucostigma identified in 1797, O. detrita in 1831, and O. definita in 1864. According to Iowa State University’s BugGuide, Orgyia means “the length of the outstretched arms,” referring to the insect’s typical posture of extending its forelegs.
Because the nocturnal adults do not eat during their short lifespan, these species do not serve as pollinators. The larvae have a taste for trees, with O. detrita preferring the leaves of oaks and bald cypresses, and O. leucostigma and O. definita found on oaks and hackberries, among other trees in their range.

While the caterpillars can appear in large masses, they typically don’t cause serious harm to their host trees, however, and they do serve as food sources for birds, beetles and wasps.

Do you use iNaturalist? National Moth Week has a citizen science project through the app where you can share your photos and contribute to the growing body of knowledge about moths found around the globe.