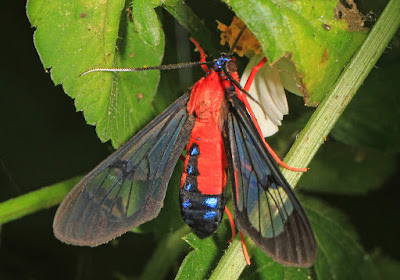 A Scarlet-Bodied Wasp Moth (Cosmosoma myriodora) on a Romerillo (Bidens alba) flower. Photo by Judy Gallagher, CC BY.
People can be pretty opinionated about the native dog fennel (Eupatorium capillifolium), which some gardeners consider a nuisance plant and others merely tolerate. But for those who welcome it into their outdoor space, another interesting native could be there, too – the Scarlet-bodied Wasp Moth (Cosmosoma myrodora).
The plant provides this species protection from predators, such as the golden orb-web spider, according to an interesting research document by University of Florida IFAS Extension. But not through serving as a host plant for the moth’s larvae, however. Researchers found that adult male Scarlet-bodied Wasp Moths obtain defensive compounds by feeding on dog fennel. “The male transfers the pyrrolizidine alkaloids acquired from dog fennel to the female through seminal infusion, and the same alkaloids are then transferred to eggs by the female as a defense against predation,” the document states.
Another tactic to avoid predation? When in flight, the moth can be taken for a wasp; hence, its common name.
This eye-catching moth, which is about 35 millimeters from wingtip to wingtip, has a bright red thorax and abdomen, with a line of shiny blue dots on the abdomen. Its legs are red, too. Offsetting all that color, the moth’s partially transparent wings are edged and veined in black. All in all, a very striking creature to behold.
The moth can be found in coastal areas from South Carolina to Texas, and is seen throughout the state of Florida, inland as well as in coastal plains.
Larvae of C. myrodora feed on just two native plants, according to UF/IFAS: the Florida Keys hempvine (Mikania cordifolia) and the climbing hempvine/hempweed (Mikania scandens).
The Scarlet-bodied Wasp Moth, like yesterday’s featured creature, the Black-dotted Spragueia Moth (Spragueia onagrus), is in the Noctuidae family, also known as Owlet moths. In the genus Cosmosoma, which was first identified by German entomologist Jacob Hübner in 1823, this specific species was not documented until 1907. That credit goes to taxonomist Harrison Gray Dyar, Jr., who was apparently quite the character, according to his Wikipedia biography.
The description of the moth in the 1907 edition of the Journal of the New York Entomological Society labels it a new species and lists observations at Indian River, Palm Beach, and Miami. And, just like we continue to see with native plants even today, the species previously was identified as other species before being recognized as its own entity. “This species has been known as Cosmosoma Omphale Hübn. and Cosmosoma auge L., but it differs from the species bearing those names in the extent of the black band, which begins on the second abdominal segment and does not touch the thorax.”
Seen a Scarlet-bodied Wasp Moth lately? Share your photos through iNaturalist’s National Moth Week citizen science project. For more information, check out the FNPS blog and visit the official National Moth Week site.
By Laura Bennett-Kimble, Florida Native Plant Society member-at-large and Certified Florida Master Naturalist
national moth week