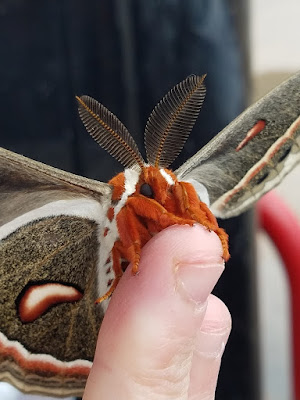 Striking in appearance in both its larval and adult phases, this moth can be found from Florida north to Nova Scotia in Canada, and as far west as the Rocky Mountains.

The moths are the largest found in North America. Their bodies are reddish orange, and wings are black to brown with striking bands of white, red and tan. A typical wingspan is five to seven inches, according to the National Wildlife Federation.

Caterpillars are spectacular looking, too, with bright green bodies covered in knobby protuberances of orange, yellow and blue, as well as delicate black spikes. Like most butterfly and moth larvae, the caterpillars do change coloration and morphology as they grow from one developmental stage (instar) to the next. 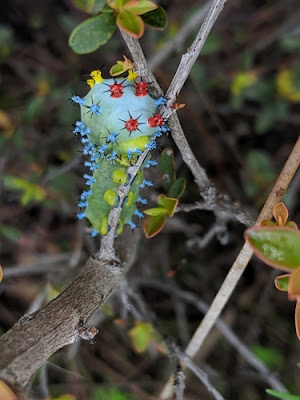 Nocturnal and non-eating as adult moths, they’re indiscriminate eaters when caterpillars. Food sources include the leaves of oak, red maple, elderberry, sweet gum, dogwood, cypress, persimmon, azalea, blueberry, hibiscus, cherry laurel, hawthorn, button bush, and many more trees and shrubs. Because they have such a wide range of food hosts, the larvae aren’t pests, according to University of Florida/IFAS.

In the Saturniidae family, H. cecropia is in good company with the Luna, Promethea and Polyphemus moths. They also display an excellent example of how to tell a moth from a butterfly – fancy, feathery antennae – what the Xerces Society describes as “the most flamboyant in the pollinator world.”
Cecropia Silk Moths are a bit mythological, too. Saturniidae comes from the Roman god Saturn, and H. cecropia is named after King Cecrops, the first king of Athens. He also happened to be part human, part fish or snake, too. (A quick online search yields some fantastic images of the king, if you’re intrigued by this physiology.)

The large and hard-to-miss Cecropia Silk Moth has been well studied and appreciated over the years, according to UF/IFAS, which says, “Due to its size and hardiness, Hyalophora cecropia has been used extensively in physiological and biochemical research. Carroll Williams conducted pioneering work on juvenile hormone and its role in molting and metamorphosis using this species. Owing to its impressive size and appearance, Hyalophora cecropia has become a favorite of collectors and amateur Lepidopterists. Eggs and pupae are commercially available, and a small livestock industry has developed around this and other related species.”

If you’d prefer to merely observe and admire, rather than take an active role in the moths’ life cycles, consider viewing them to your yard. According to National Moth Week organizers, any type of light, such as a porch light, will attract a wide variety of moths. “Moths need a surface to rest on. White sheets are often used. Hang a sheet over clothes line or between two trees, and shine the light on it. An outside wall also works well if your light is set up near a house or a building,” NMW says. “Wait for the moths to come to your light so you can observe and photograph them.”