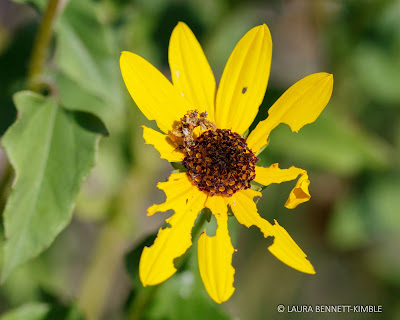 Synchlora larvae shows off its attire of Dune Sunflower petals, as well as its handiwork on the flower. With a Pityopsis graminifolia blossom and an index fingertip for size comparison, this captures just how small these Synchlora caterpillars are, even adorned in flower petals. Caterpillar photos by Laura Bennett-Kimble

Today is the final day of the 10th annual National Moth Week, and to cap off the week, we’re going to look at the Synchlora genus, a group of moths that include tiny inchworm-type caterpillars and beautiful emerald moths

A very interesting trait of the 12 North American species in this genus is that of disguising themselves when vulnerable larvae. The Camouflage Looper, or Wavy-lined Emerald Moth, (Synchlora aerata) and Southern Emerald Moth (Synchlora frondaria) are two species that cover themselves in flower petals and other plant material.

The larvae seem to prefer composite flowers, such as those found on Pityopsis graminifolia, Helianthus debilis and Bidens alba, as both camouflage and food. According to Iowa State University’s BugGuide, the larvae of most of the Synchlora species feed on plants in the Asteraceae family, as well as those in the Lamiaceae and Polygonaceae families.

The caterpillars also move in the classic inchworm mode, first moving the front part of their bodies forward, then, folding their abdomens to create an upside-down “U” shape, the back half of their bodies creeps forward to catch up with the front. This is necessary, since they do not have feet the whole length of their bodies, like many other species in the Lepidoptera order. This scooching mode of mobility is particularly entertaining to watch when the camouflaged creatures are on the go. 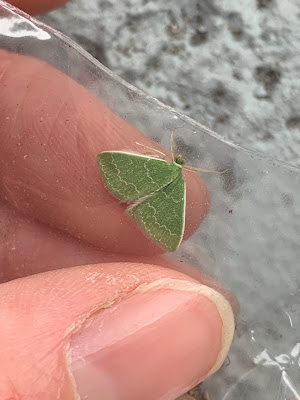 The adults in this moth genus can be quite lovely shades of green, though because wingspan ranges from 14 millimeters to 26 millimeters, the little jewels can be hard to spot. But, isn’t that part of the appeal of jewels – their elusiveness? Take a close look around your neighborhood, and you may be surprised to see not only pretty Synchlora moths, but even their entertaining little larvae.

Moths, in the same Lepidoptera order as butterflies, are relatively short-lived, often spending weeks as hungry larvae then just days as flying, mating adults, yet they are so important to a healthy environment. Their role in diverse ecosystems benefits so many other species, from the many native plants they pollinate to the songbirds that feed them to their young.

Thanks for following along with us this week as we took a closer look at a few of these flying creatures that help make this planet such a diverse, great place to live.

National Moth Week is a project of the Friends of the East Brunswick Environmental Commission (Friends of EBEC), a 501(c)(3) nonprofit organization.