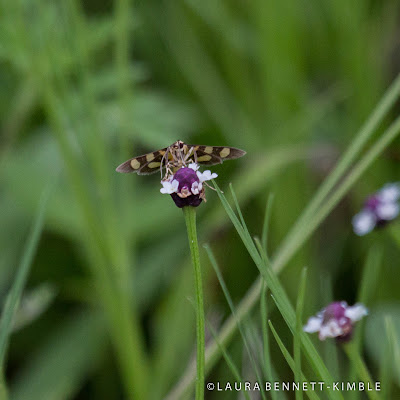 A Syngamia florella moth on the native Phyla nodiflora, in a ruderal area of south Orlando. 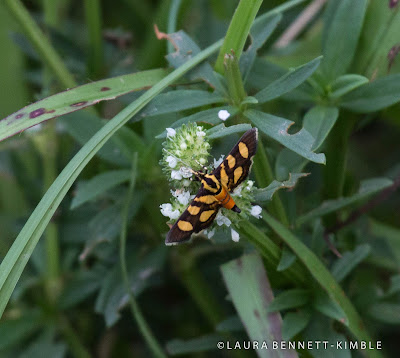 Indiscriminate in its food choices, this adult Orange-spotted Flower Moth is on the flower of the nonnative Shrubby False Buttonweed (Spermacoce verticillata). Photos: Laura Bennett-Kimble

We continue our celebration of moths during National Moth Week by focusing on the dainty, zippy little Orange-spotted Flower Moth, which is remarkably colorful when seen up close. As you can see in the photos, its pronounced yellow, orange, and brown coloration make this small creature stand out in the moth world.

It can be seen day and night, and it does feed, unlike other moths that do not eat as adults. This means it serves as a plant pollinator.

In the Pyraustinae subfamily, along with the Coffee-loving Pyrausta Moth (Pyrausta tyralis), this species seeks nectar from a variety of wildflowers, including the native Phyla nodiflora and other plants, such as Bidens alba, that have smaller blossoms.

The Orange-spotted Flower Moth can be found flitting through low brush and hiding under foliage in Mexico, Paraguay, Bermuda and several Caribbean islands, as well as in South Carolina to Florida and Texas, according to the Florida Department of Agriculture and Consumer Services.

First described by European entomologist Caspar Stoll in 1781, the adult moth is most frequently seen in Florida during October and November, though it can be seen pretty much year-round.

The green caterpillar, like the adult, is small, of course, and rather thin compared to many chubbier moth larvae.

The larvae’s preferred host plants are low-growing plants in the Rubiaceae family, which become polka-dotted like the moths themselves after the caterpillars eat small holes in the leaves. “Most host records are on Spermacoce L., including Spermacoce laevis Lam., S. tetraquetra A. Rich., Spermacoce verticillata L., and Richardia grandiflora,” FDACS says.

This mix of Florida’s native and nonnative plants also are used when it’s time for the caterpillars to think about pupating. They will create a safe haven for themselves by rolling a bit of leaf as their outer pupal layer.

The 10th annual National Moth Week runs through Sunday, July 25. If you’d like to get involved, you can participate in a citizen science project through iNaturalist by sharing your photos. And, if you are unsure what kind of species you found, the app will help you with identification, both in its automated recommendations and through suggestions provided by other app users who may recognize the moth from your photo.

“Documenting the numbers and locations where moth species are flying can help scientists determine what impacts, if any, climate change, pollution and other threats are having on native populations,” said Liti Haramaty, who co-founded National Moth Week with David Moskowitz, Ph.D.