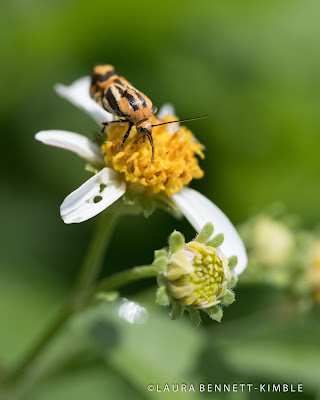 Black-dotted Spragueia Moth on Bidens alba. Photos: Laura Bennett-Kimble
Oh, the small indignities of being a moth – would you like to be known as a species in the subfamily Bird Dropping Moth? I didn’t think so.

The dramatically colored yet easy to miss Black-dotted Spragueia Moth (Spragueia onagrus), is in that Acontiinae subfamily, though it doesn’t quite look as much like bird poop as some others in that group. It’s also in the broader Noctuidae family, which has a much more appealing common name of Owlet moths.

A diurnal pollinator moth, this small orange and black beauty is a fan of the nectar of Phyla nodiflora, Bidens alba, Coreopsis, and many other flowering plants found across the state.

According to HOSTS – a Database of the World’s Lepidopteran Hostplants, British Museum of Natural History, food plants for Spragueia onagrus are Consumptionweed (Baccharis halimifolia), dwarf chestnut (Castanea pumila), and corn (Zea mays). There’s also information that it seeks out bindweed (Convolvulus sp.) as a larval host plant, as well.

The species, which is found throughout Florida and primarily in coastal areas of Alabama, Georgia, South Carolina and North Carolina, was first identified by Achille Guenée in 1852. According to Wikipedia, Guenée was a French lawyer, as well as an entomologist who published 63 texts and was a founding member of the Société Entomologique de France in 1832. 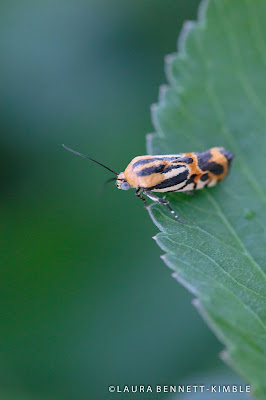 Spragueia onagrus is very small, with a wingspan of maybe 15 millimeters. And, if you can’t get a good look at it, the moth can be confused with a similarly colored species, Common Spragueia Moth (Spragueia leo). Quick tip: While they’re both black, orange and yellow, S. onagrus is more stripey than S. leo.

This writer isn’t going to lie – if it weren’t for the awesome citizen scientists on iNaturalist, I might still be incorrectly identifying the little moth I spotted a few years ago as S. leo. This species is also found in Florida, but lives in a much wider geographical range, reaching almost to the Great Lakes region and west of the Mississippi river.

Do you use iNaturalist? National Moth Week has a citizen science project through the app that provides a place to share your photos and contribute to the body of knowledge about moths found around the globe.