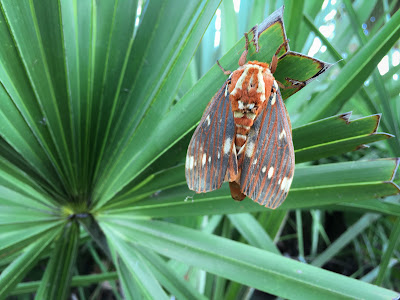 Going by those latter two names, you would be correct to assume the moth has a relationship with trees. Caterpillars can be found throughout much of the eastern part of the country munching on the leaves of hickories (pignut, scrub, water, and mockernut), pecan, butternut, black walnut, sweet gum, persimmon, sumacs, and even cultivated cotton. It’s also possible to find them on buttonbush, wax myrtle, plum (chickasaw and flatwoods), sourwood, ash (green, pop, and white), sycamore, sassafras, and lilac, according to University of Florida/IFAS.

Local populations appear to prefer some hosts more than others, UF/IFAS says, noting that research indicates “persimmon appears to provide the most nourishment for growth in the larvae.” 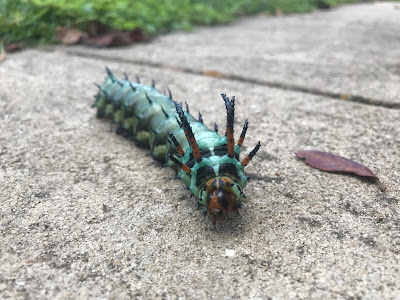 A Regal Moth (Citheronia regalis) larvae (aka. caterpillar) on a sidewalk near a wooded area in Marion County demonstrating why one of its common names is 'Hickory Horned Devil'. Photo by templeton_d_21, CC BY-NC

And what a growth it is! These saturniid caterpillars (saturniid is a short way of saying they're in the butterfly/moth family called Saturniidae, which have the largest species of moths in the world) can get as long as 15 centimeters – what UF/IFAS describes as “the size of a large hot dog” – before entering the pupation stage. They also become quite formidable in appearance as they mature, with impressive orange “horns” behind their heads and black spikes along their green bodies.

While these caterpillars may look like trouble, their horns and spines don’t sting or carry venom. This innocuous reality differs from that of several other moth larvae, including the deceptively cute puss moth (Megalopyge opercularis), which in its larval stage is one of the most venomous caterpillars in the U.S.

Citheronia regalis is nocturnal, and adult moths do not feed. Adults have wingspans up to around 6 inches. Despite their large size in both larval and adult stages, they not pests and should not be harmed. In Florida, C. regalis can be found in the panhandle down to the lower central part of the peninsula, but not in south Florida.

This moth has been known for centuries, thanks to early naturalists. Identification of the species, in 1793, is credited to Johan Christian Fabricius, a Danish zoologist who studied under Carl Linnaeus and spent decades poring over specimens collected by others who traveled around the globe. He is “considered one of the most important entomologists of the 18th century, having named nearly 10,000 species of animals, and established the basis for the modern insect classification,” according to Wikipedia. He clearly considered this moth a regal being, as he was the one who set its scientific name.

If you’ve been lucky enough to snap a photo or two of Citheronia regalis in its larval or adult phase, consider sharing them in the iNaturalist National Moth Week citizen science project. For more information, check out National Moth Week.

Consider planting this beautiful moth's host plants in your yard (listed above with link to our plant profiles), if you have one, and encouraging your city and county to incorporate its host trees into their urban forestry plan.