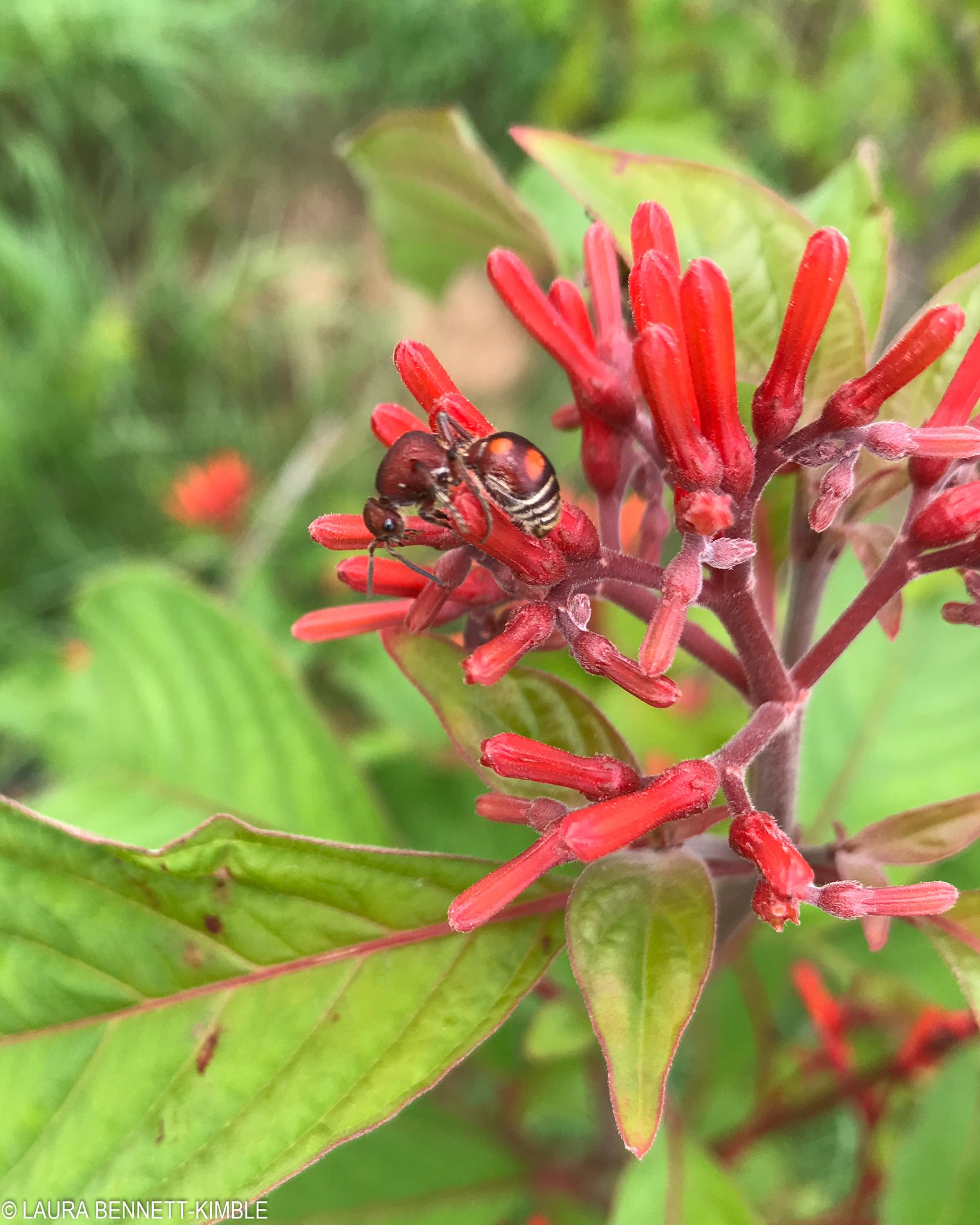 A wingless female Dasymutilla wasp in the author’s native firebush. 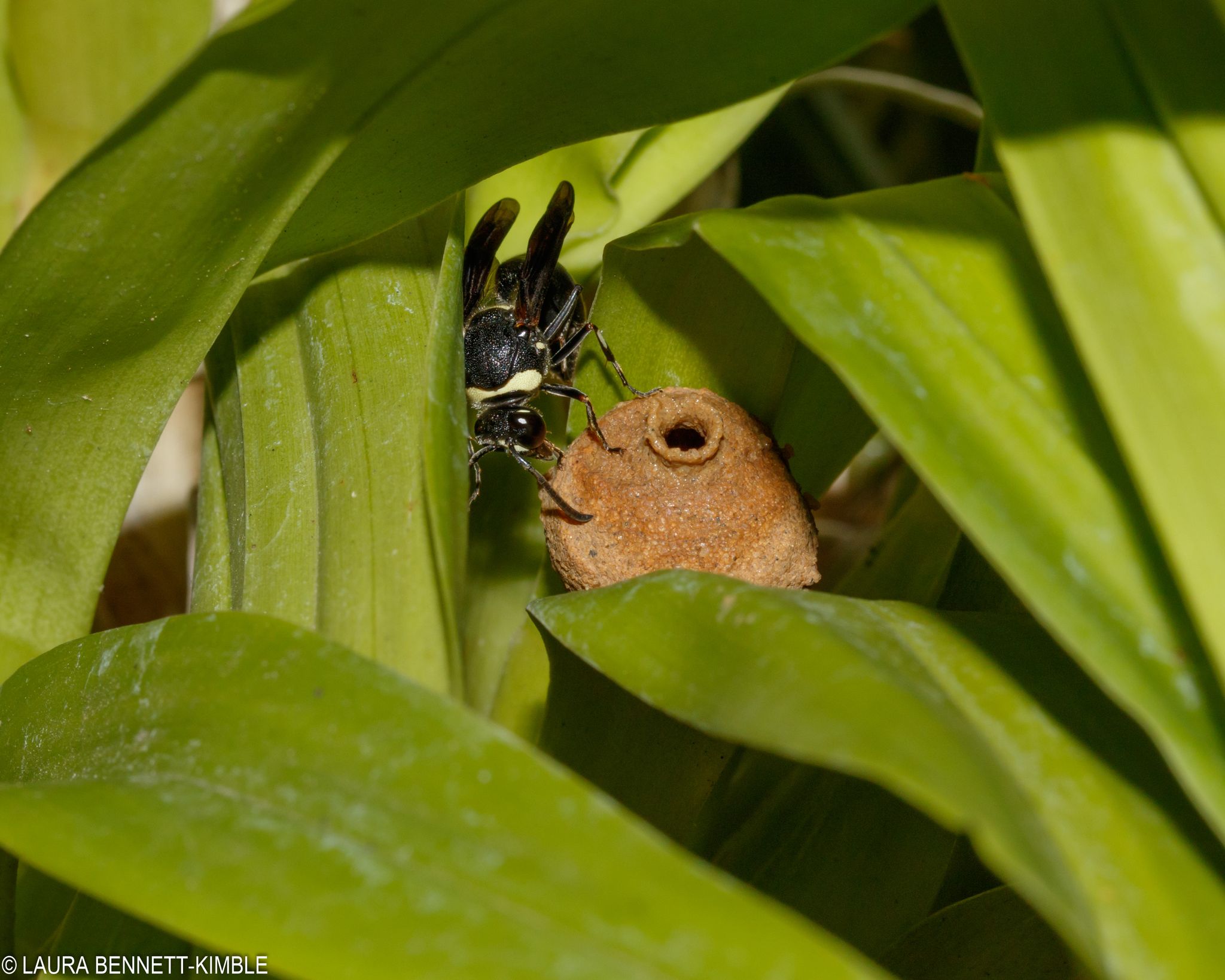 Potter wasp and her nest on orchid leaves. 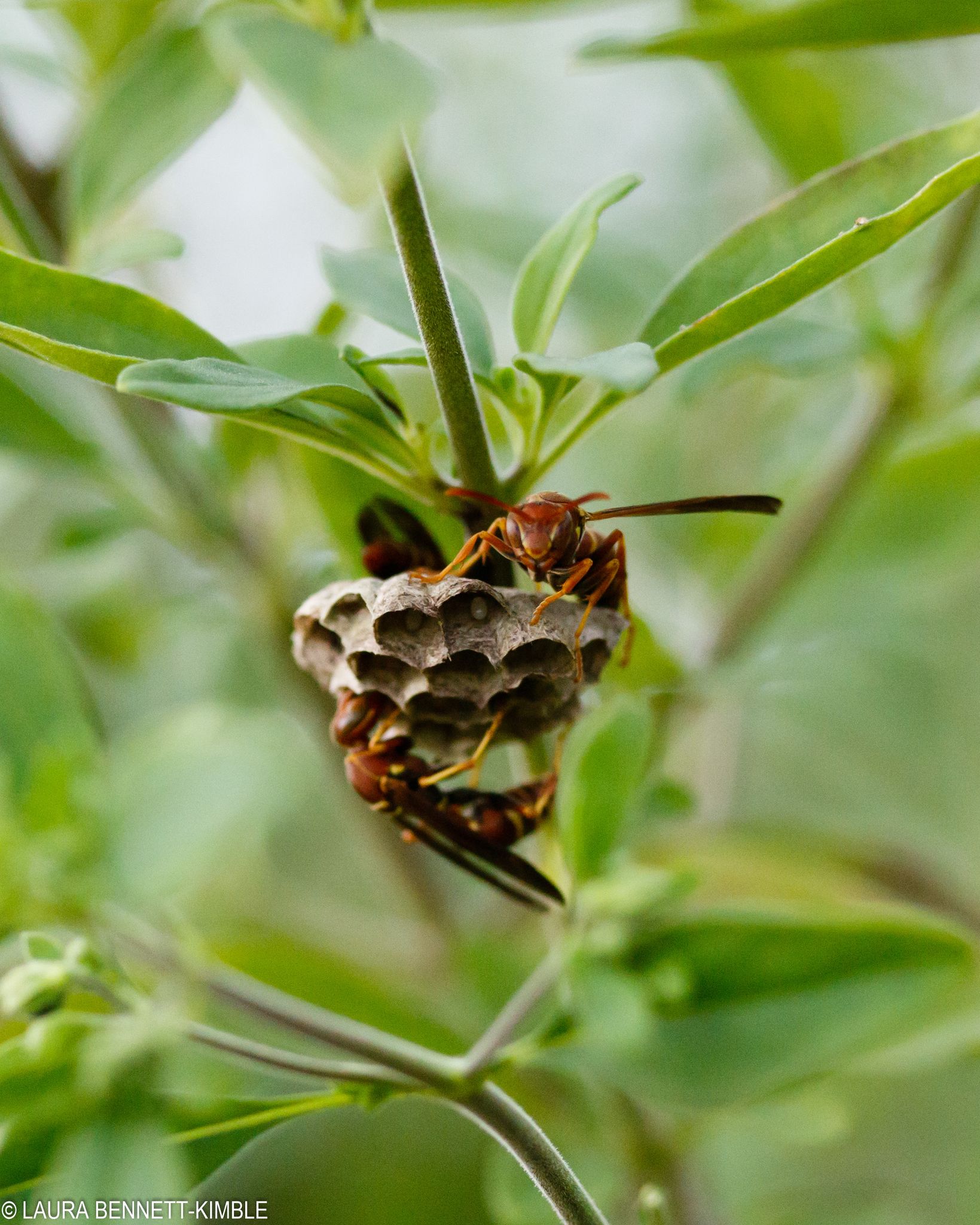 Paper wasps and an exposed egg. Photos by Laura Bennett-Kimble

Did you know the U.S. Secretary of the Interior, Deb Haaland, proclaimed June 21–27 National Pollinator Week on Monday?

The proclamation states, in part, “WHEREAS, pollination of plants is vital to healthy lands, which in turn provide natural resources for the Nation, including habitat for fish and wildlife; water, mineral, and energy resources; and abundant recreational opportunities for the public; and WHEREAS, pollinating species help to pollinate approximately three-quarters of the world's plant species; and WHEREAS, the decline of some North American pollinators is concerning and impacted by the effects of climate change … and WHEREAS, both public and private lands provide habitats for pollinating species that are critical to healthy ecosystems and the supply of diverse foods; and WHEREAS, pollinators, found across America in urban and rural areas, including on Tribal lands, can connect children and communities to nature, engaging all generations in stewardship activities; and WHEREAS, the Department's efforts-working closely with States, Tribes, industries, businesses, other Federal agencies, nongovernmental organizations, and communities across the country to support the health of pollinators in North America–are important examples of collaborative conservation and efforts to restore balance to nature.”

In other words, these often-tiny pollinators carry a heavy weight, and they need our help.

This brings us to wasps, those ubiquitous hovering creatures that like to hang around our open garage doors, porches, decks and other places where we like to hang out, too. While occasionally annoying and of course well-known for their painful stings, wasps are also pollinators and key players in a healthy ecosystem.

According to Pollinator Partnership, wasps are the main pollinators of foods including mangoes, macadamia nuts, and sesames – and there are 800 kinds of fig wasps!

Unlike bees, wasps don’t typically have hairy bodies, so they are not as effective at picking up and transporting pollen. But like bees, butterflies and other insect pollinators, wasps need the quick energy found in nectar and pollen, according to the U.S. Forest Service.

Even the wingless female Dasymutilla wasp can be found on flowers, as was recently seen in my own garden on a native firebush plant.

“Although wasps hunt prey to feed to growing offspring, the adult hunters are herbivores, just like bees, who visit flowers for carbohydrates in the form of sugar,” says Professor of Behavioural Ecology Seirian Sumner in her article, “Wasps: why I love them, and why you should too.”

These tiny predators are known for their pest control, as they collect spiders, caterpillars and other insect life to provide food for their larvae. Typically, wasps place their prey with eggs inside chambers they have constructed of various materials.

Potter wasps build jug-like nests of mud, which look like very small, very precisely molded pieces of pottery, and Thread-waisted wasps also use mud to create their nests. Paper wasps peel thin layers of wood from wooden surfaces like decks and handrails, which they then chew into a pulp to create their paper-like nests.

“To date, there are no studies that allow even a rough estimate of the value of wasps as pollinators. But, given the importance of natural pollinators to our food security and the apparent declines of well-recognized pollinators like bees and hover flies, now would be a good time to start taking wasp pollination a bit more seriously,” Sumner writes.

Gardeners and agricultural workers consider the paper wasp Polistes carolina to be a beneficial insect, because it accomplishes two things for plants and crops: it pollinates them when feeding on nectar, and it also preys on pests, according to UF/IFAS. “Despite their economic benefit to agriculture, no documented attempts to rear Polistes carolina exist. In fact, the species’ predilection to build nests on or around residential houses and the possibility of stings convince some homeowners that the wasps are hazards. This species, however, is not particularly aggressive and typically stings only when threatened.”

Yes, we need to respect all of these species and keep our distance when possible. But we also need to understand their important role in a healthy ecosystem and not automatically douse them with pesticides, which can trickle throughout a backyard habitat and affect other important species.

Consider them the sharks of the bug world. Without them, other insect species would overpopulate and the delicate balance of nature would be severely disrupted, leading to crop decimation and other harm. And remember, many of these wasps also enjoy a sugary drink of nectar, which helps plants with their pollination cycles. It’s a win-win for nature.

Thanks for reading! In our next installment, we’ll take a look at some of the fly species that are beneficial to plant pollination, helping native plants reproduce and thrive.