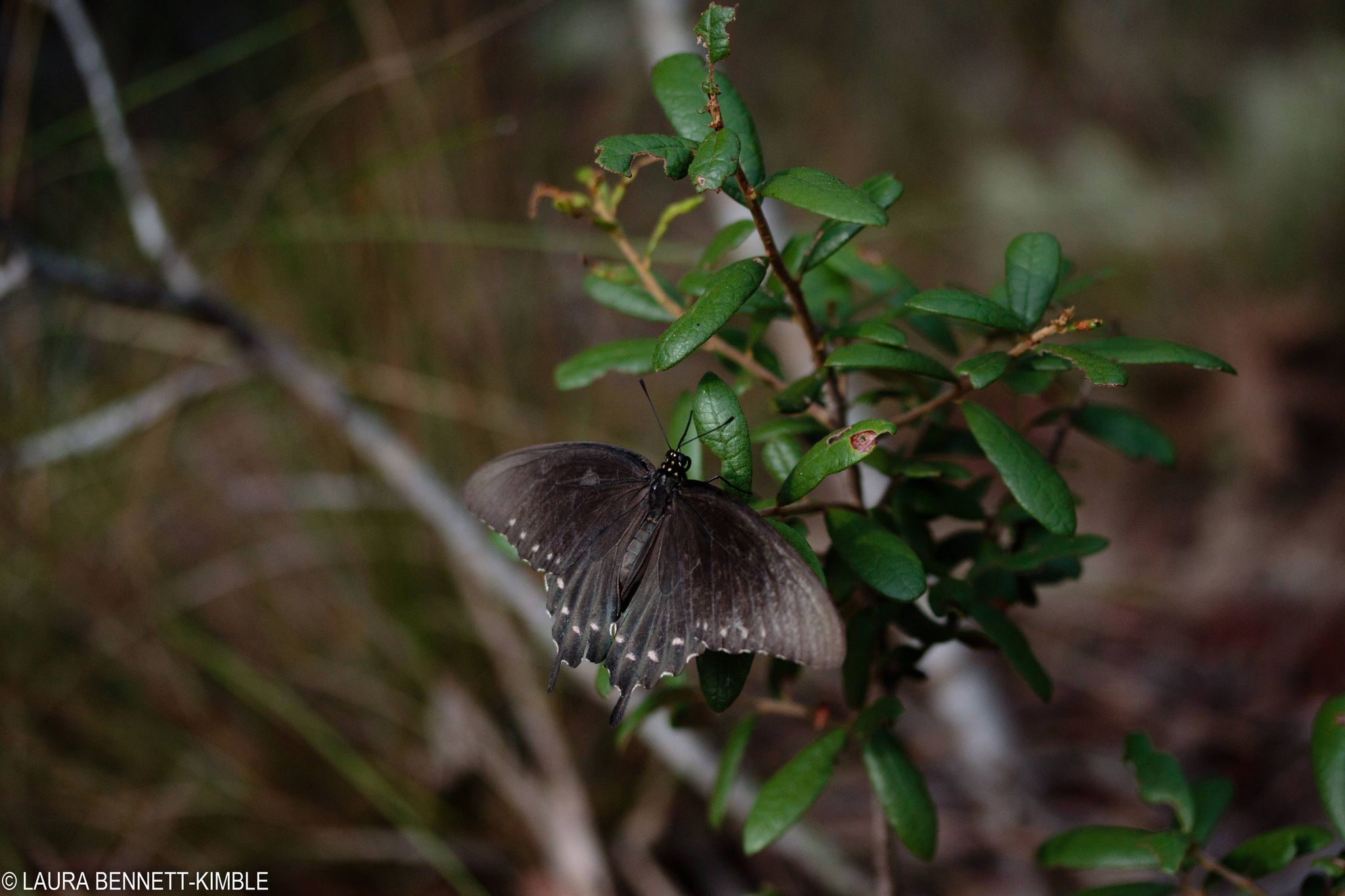 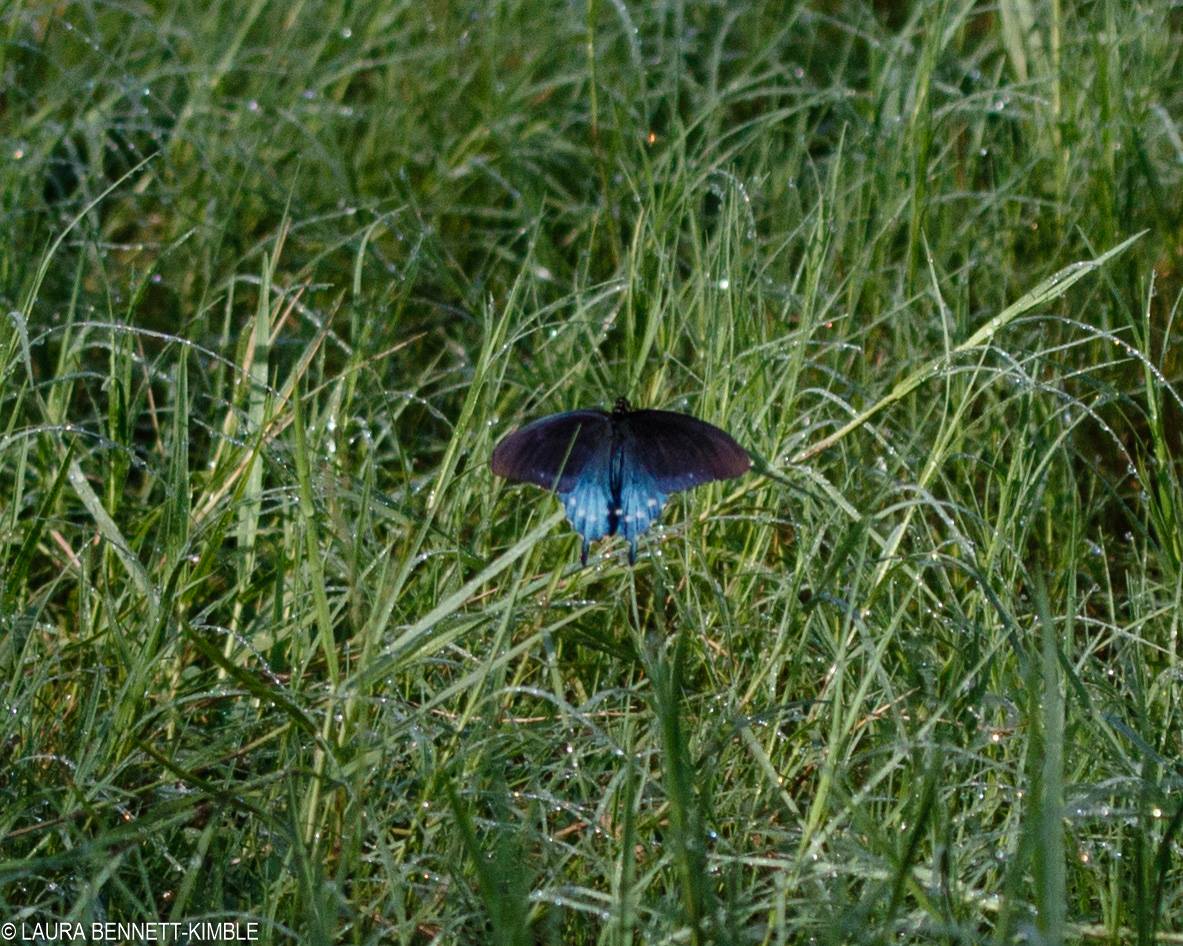 At another Central Florida native plant rescue project, this male Pipevine Swallowtail was seen flying across a section of the property that previously had been bulldozed and became populated with nonnative cogon, natal and other grasses. It can be identified by the metallic blue on its lower wings. 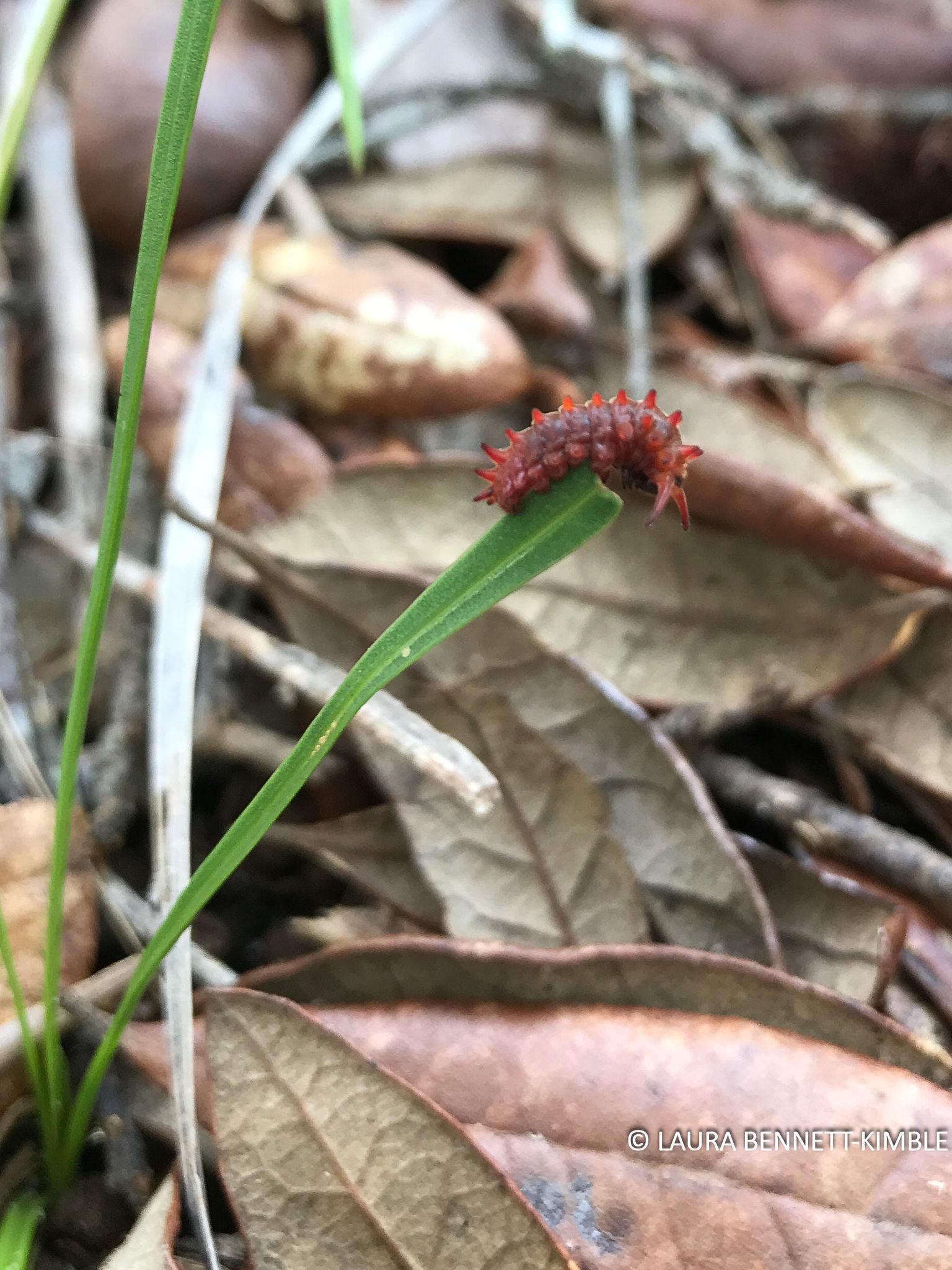 This tiny Pipevine Swallowtail caterpillar was at the same site, in an area that had not yet been disturbed.

Pipevine Swallowtails (Battus philenor) share something in common with Monarchs and several other butterflies: Whether in the caterpillar or butterfly stage of life, these species are not at all tasty and can be downright toxic when ingested – not that I know from personal experience, mind you. This aspect of the species is because their larval diet consists of plants containing compounds poisonous to most other herbivores, according to Florida Butterfly Caterpillars and Their Host Plants (Minno, Butler, Hall).

The Pipevine Swallowtail is somewhat of a generalist when it comes to seeking nectar and helping to pollinate plants, but it does gravitate to the purple and pink flowers of plants including ironweed, swamp milkweed, lupine, azalea, phlox, lantana and thistle, among other pastel bloomers. There is even photographic evidence of them pollinating a pink Appalachian orchid, Platanthera shriveri. According to Pollinator Partnership, “in most butterfly-pollinated orchids the sticky disc (viscidium) of the pollinia packets becomes attached to the base of the butterfly’s tongue or its large compound eyes.” As the butterflies feed on nectar, the pollen adheres, ready to be transferred to another blossom as they continue feeding.

Pipevine Swallowtail butterflies do not seek the nectar or pollinate these pipevines, however. Instead, small flies serve as pollinators when they get temporarily trapped inside the plant’s flowers and become coated in pollen prior to escape, according to UF/IFAS.

Exotic plants in the Aristolochia family have been shown to attract female Pipevine Swallowtails, but the eggs they lay on the exotic species do not survive, according to University of Florida/IFAS data, suggesting the nonnative species are either distasteful or toxic to the larvae, which die due to apparent starvation or toxicity.

Again, native plants are the best plants when it comes to supporting diverse native species.

The Pipevine Swallowtail was originally described by Linnaeus in 1771, and this beautiful species can be found from Arizona to Florida and up to New York and even southern Ontario, and as far west as California.

Thanks for joining us on our Pollinator Week journey. Tomorrow, we’ll take a look at another native pollinator that is a vital piece of the native ecosystem puzzle – the ubiquitous wasp.