Pollinator Week – Time to wrap it up 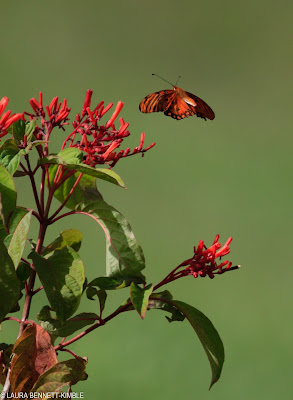 Well, here we are: The final day of Pollinator Week. Started 14 years ago when the U.S. Senate unanimously approved designation of a week in June as “National Pollinator Week” to address declining pollinator populations, the week has grown into an international event and continues to raise awareness of the importance of these wonderful creatures that help provide us food.

How do they do it? Pollination occurs when a pollen grain moves from the anther (male) to the stigma (female) part of a flower. This can happen on one specific bloom through self-pollination, or multiple blossoms, when the pollen is transported from one flower to another. That typically is helped along by animal pollinators. Wind can certainly transport pollen, as well, which often leads to many, many sneezes, as well as cars turning green with pollen, in the annual springtime pollination extravaganza.

This first step in the process leads to seeds, then fruit, and finally the next generation of plants. Clearly, pollination is crucial to a healthy ecosystem and a productive field of crops.

It’s impressive just how many species are involved in pollination, too. Along with the top pollinators – bees – and butterflies, birds, moths, flies, and wasps, other species of pollinators include beetles, crickets, cockroaches and small mammals like bats.

While none of Florida’s resident bats are pollinators, since they are insectivores, several species of bats pollinate various plants in other parts of the country, especially in the Southwestern desert regions.

In addition, several species of banana use bats, the banksia plant relies on opossums, and the non-photosynthetic Mitrastemon yamamotoi plant of the Japanese island of Yakushima is pollinated by wasps, cockroaches and crickets, according to a Kobe University researcher.

All of these diverse pollinators face challenges today that were not threats decades ago. Climate change, air and water pollution, prevalent pesticide use and habitat destruction are adding up to species endangerment and extinction across the globe.

In 2015, New Yorker contributor Elizabeth Kolbert published The Sixth Extinction: An Unnatural History, which is an expansion of a 2009 piece she wrote for the magazine regarding the five previous mass extinction events during the life of the planet — and an apparent sixth extinction presently underway. In the article, she writes, “Currently, a third of all amphibian species, nearly a third of reef-building corals, a quarter of all mammals, and an eighth of all birds are classified as ‘threatened with extinction.’ These estimates do not include the species that humans have already wiped out or the species for which there are insufficient data.”

This sort of information can feel overwhelming and hopeless, but you can actually make a difference for pollinators now, wherever you live. One biggie, of course, is planting natives!

Pollinator Partnership offers a great list of things you can do to help pollinators survive and even thrive. These are just a few of the actions you can take:

You also can serve as an iNaturalist citizen scientist by collecting pollinator data during Pollinator Week, June 21–27, and uploading your observations to the nature app, which has a number of Pollinator Week projects. Here are few:

Thanks for sharing Pollinator Week with us. We hope you’ve gained some useful, fun information and tips to help make this a better place for not just the pollinators and the plants they support, but for all of us!

StoryHat said…
Ashe's Calamint may be endangered, but it is available at some native nurseries (I believe I got my original three from Green Isles). Maybe if we plant enough of it in home gardens and parks around the Ocala National Forest. this rare little Blue Calamintha bee can spread its territory!