September 25, 2019
All photos, video, and article by Mark Kateli, Cuplet Fern Chapter President
The Timucuan trail primarily treks northeast of the famous spring. It winds through diverse riparian, wetland, and transitional xeric hammock plant communities that are accessible through boardwalk and cleared paths.

The synergism of environmental interests was thick as the 100% humidity on a summer morning. It’s always an exciting time when nature enthusiasts come together. Every person attending had a story, an experience, or something to add to the conversation about plants and animals. David Rakes and Lavon Silvernell, our field trip leaders, shared their ecology knowledge with the people in the front and back of the group respectively. While traversing mucky areas, John Benton led a third splinter group of people that wanted to stay dry. The experience left all of us feeling grateful and happy that we took the time to travel to this special place.

Above: The arboreal manatee treesnail, Drymaeus dormani, (above) and one of it’s natural predators, the rosy wolfsnail, Euglandina rosea, (below). Both snails were roughly the same size. The manatee snail’s observation was a special one- they spend a lot of time in trees, away from eye level- particularly on cabbage palm (pictured) and citrus. D. dormani is endemic to north and central Florida [1].

Yellow anisetree, Illicium parviflorum, was prevalent on the trail. This star anise is endangered and endemic to Florida [2] where it’s naturally vouchered in wetland plant communities in just 7 central counties. Flowers were not visible this late in summer, but the unripe chartreuse fruits were. The evergreen small tree is available in horticulture and is particularly sought after for its fragrant leaves but not for spice consumption like it’s famous Asian cousin, Illicium vernum. Both fragrant plants do live up to their beautiful genus name- illicere in Latin means ‘to allure’. Yellow anisetree’s population is mainly declining due to habitat loss.
Other plants found in the vicinity of the pictured yellow anisetree were Atlantic white cypress (Chamaecyparis thyoides) and sweetbay magnolia (Magnolia virginiana).
We even spotted an unusual non-native plant along the trail, the African monk orchid, Oeceoclades maculata. Although looking like a juvenile Sansevieria plant at first glance, it was quickly ruled out due to the bulbous basal stem (bottom right in the picture). Scientists believe that the monk orchid is dependent on parasitising on certain fungal species [3]. The plant is often found in leaf litter and not firmly entrenched in soil, easily being uprooted. Interestingly, the physical action of rainfall pollinates it’s flowers[4]. Listed as an invasive plant before 2007, it has been delisted since and is simply a non-native, naturalized plant. This plant also happened to be the only instance where we spotted this species during our trip- much different from the behavior of exotic invasives that competitively and systematically push out native plants from habitats.

Other plants found in the vicinity of the monk orchid were sarsaparilla vine (Smilax pumila) and Persimmon (Diospyros sp.).
Some plants provided a guessing game. Lavon, April McClain, Hanna Rosner-Katz, and myself found this interesting vine that we first thought was some sort of yam. When we broke off a leaf and noticed white sap drops, we realized it was something completely different- a milkvine, perhaps.

Florida milkvine, Matelea floridana, is listed as State-Endangered [5]. Our guessing game vine was found in a few spots through the beginning portion of the trail, especially in disturbed areas off the boardwalk with dappled sunlight. Since we did not witness any flowers or fruit, milkvine was our best guess due to its opposite cordate leaves and leaf venation. The adjacent picture shows the climbing vine with one of its leaves freshly clipped with a white dot of sap exuding from the cut site (top center).
Plants found near the guessing game plant were cabbage palm (Sabal palmetto), azalea (Rhododendron sp.), and bald cypress (Taxodium distichum). 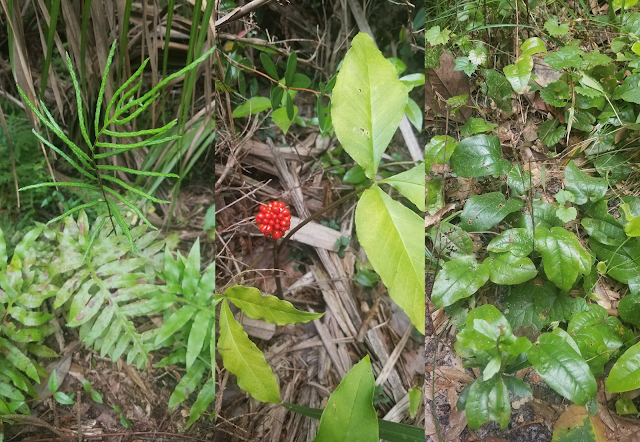 Above, left to right: The spore bearing structure of netted chain fern (Woodwardia areolata), the ripened red fruit of Jack-in-the-pulpit (Arisaema triphyllum) on a naked spadix after the enrobing spathe decomposed, a grove of slow-growing spineless sarsaparilla vine (Smilax pumila) carpeting the forest floor with luster. 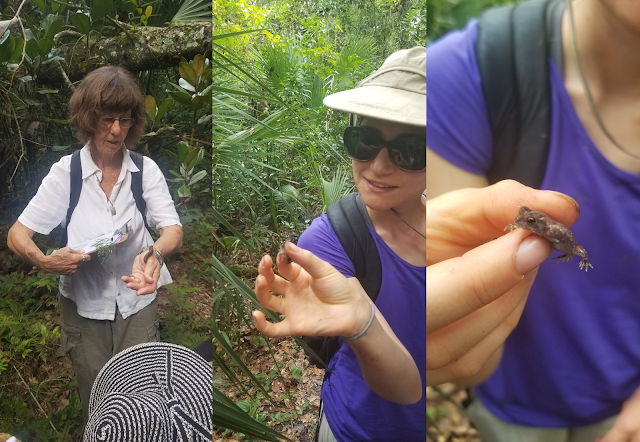 Above, left to right: Lavon Silvernell with a millipede crawling up her left hand, Hanna Rosner-Katz holding the diminutive oak toad (Anaxyrus quercicus) which is endemic to the coastal plains of the southeastern United States and is regarded as the smallest toad species in North America [6], a close-up of the loveable Lilliputian. 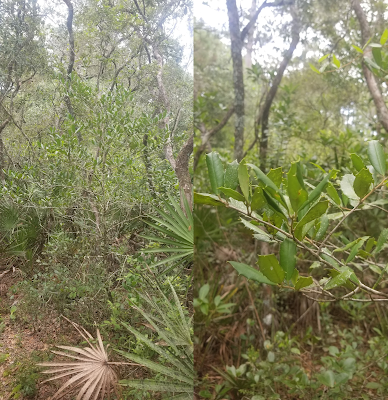 Above: This tree and its close-up leaf detail was determined to be scrub holly, Ilex opaca var. arenicola, a native endemic species[7] due to its habitat and geographical location. It was found in a transitional xeric hammock portion of the trail off the main boardwalk further east of the springhead. 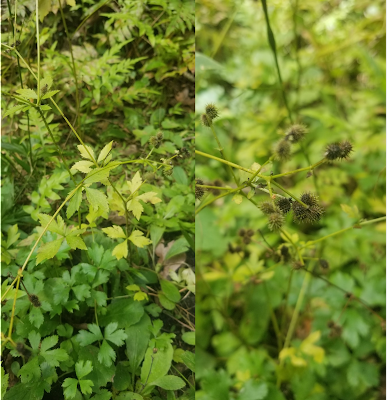 Above: Often seen in mesic environments but seldom written about, Canadian black snakeroot, Sanicula canadensis, was present towards the end of the trail where it linked back up to the springhead (disturbed area). This species of snakeroot, as the common name suggests, is present across the northeast into Canada. Its bur-like ovaries were not painful to the touch. An interesting native from the carrot family. Saponins present in this plant, however, make it inedible. 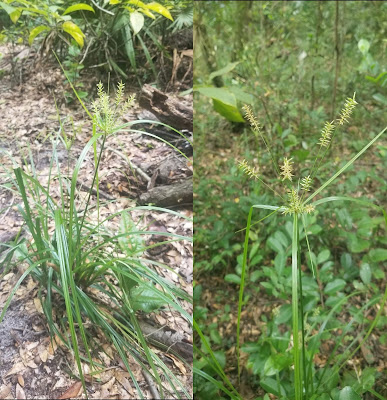 Above: Strawcolored flatsedge, Cyperus strigosus, with immature seeds was present in the wetland plant community right off the trail (cleared area). Another informal name for this native plant is September sedge (our field trip was mid-August). This plant is found throughout the state and is commonly associated with wetland habitat.

A special thanks to David Rakes, author of ‘Botanizing with Bears’ for taking the time to lead this field trip. Without Lavon’s and his useful plant list specifically for the trail, this event would not have been so enjoyable. More information about his book can be found here. You can also purchase his book by mailing him a check or money order for $18 (includes shipping and handling) to P.O. Box 2706, Belleview, FL 34421. Tell him this article referred you!


References
[1] University of Florida, Department of Entomology and Nematology. http://entnemdept.ufl.edu/creatures/misc/gastro/tree_snails.htm

[4] University of Florida Center for Aquatic and Invasive Plants. https://plants.ifas.ufl.edu/plant-directory/oeceoclades-maculata/.