December 11, 2018
Before we get to the Jurassic ferns, step back with me in time and space for a moment to imagine the gradual and chaotic development of life on earth. We don’t yet know much about the beginning. During 2018 the NASA Curiosity rover provided more evidence of water on Mars and, importantly, organic molecules of the types that make life on earth. That isn’t yet scientific proof for prior life on Mars because complex “organic” molecules can be created chemically without life. We will have to wait to learn more about the story of life’s origins on earth and perhaps Mars. 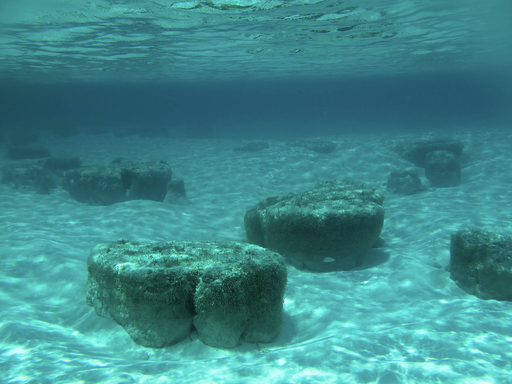 Stromatolites, Exuma Land and Sea Park
Bahamas National Parks
From the fossil record, we know that Stromatolites, a living cyanobacteria, first appeared on earth roughly 3.5 billion years ago. They still live and grow relatively nearby (off the Exuma islands of the Bahamas). Stromatolites produce oxygen and slowly changed earth’s atmosphere, but nothing is simple in science or a good murder mystery. The earth has been through many atmospheric changes and five prior mass extinctions. Now is a good time for humans and other mammals to thrive and breathe, but it has not always been so. Let us not ruin that. 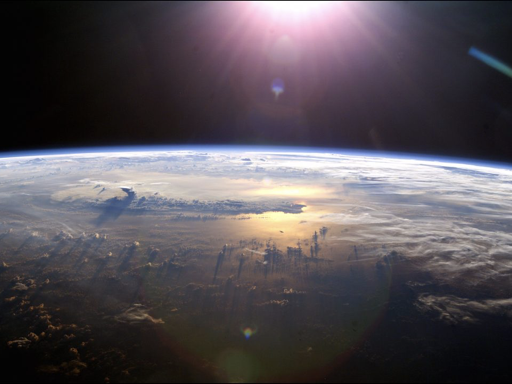 This long view of life on earth (3.5 billion years for the stromatolites and 350,000 years for Homo sapiens) may help us realize how new we are, as a species, on the landscape. Imagine how much change, chaos, tenaciousness, has occurred and how many species lived and died and are only known to us through fossils, amber, and ever more sophisticated science that reveals tidbits of this long past.
Some of the plants now living around us are recent, either anomalies of their parent plants or just moved in from elsewhere. No plant in Broward has lived in the same spot where we find it now for more than roughly 75,000 years (somewhere between 50,000 and 100,000 years). That was when the ocean receded from South Florida for the last time and until the present day. For perspective, the Pyramids of Giza are 4,500 years old.
During the last glaciation, about 20,000 years ago, the poles were heavily covered with ice and the ocean was much lower than now. Broward was, of course, exposed and in fact the Florida peninsula was something like three times wider. Our Broward coastline is steep beyond the beaches where the Gulf Stream now kisses Broward with warmth. So even then, when the ocean was low, our coastline was only slightly further east. Most of the then-extended Florida landscape was to the west and far, far beyond Naples. I imagine a gently sloping landscape to a much smaller Gulf of Mexico. 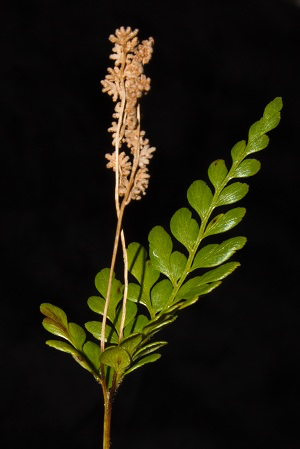 Pine Fern, Anemia adiantifolia
Photo: James Johnson 2014
The climate then, 20,000 years ago, would have been much different and, therefore, the plant life, too. Saber toothed cats, mammoths, mastodons, and sloths were then in Florida until their extinction about 10,000 years ago. People were evidently near Tallahassee 14,500 years ago, according to recent archeological discovery.  The evolution of the landscape and many ecosystems over the past 10,000 years in South Florida would make fascinating research and telling.
In the time since the sea receded from Broward, about 75,000 years ago, we can image a very complex and chaotic history with a relatively gradual climate change. Plants populate from the Caribbean, South America, Mexico, the Gulf coast, and from the temperate north (the US Eastern Seaboard). Species die out. Other species adapt to changes. More species keep arriving. Anomalies, genetic errors, plants different from their parents, are born here and most die, but a few persist to become our endemic species, different than any other species that ever existed on earth before. Some genera that migrate to South Florida had existed on land elsewhere for millions of years. Three fern genera that had existed on earth for about 200 million years found home here, too. 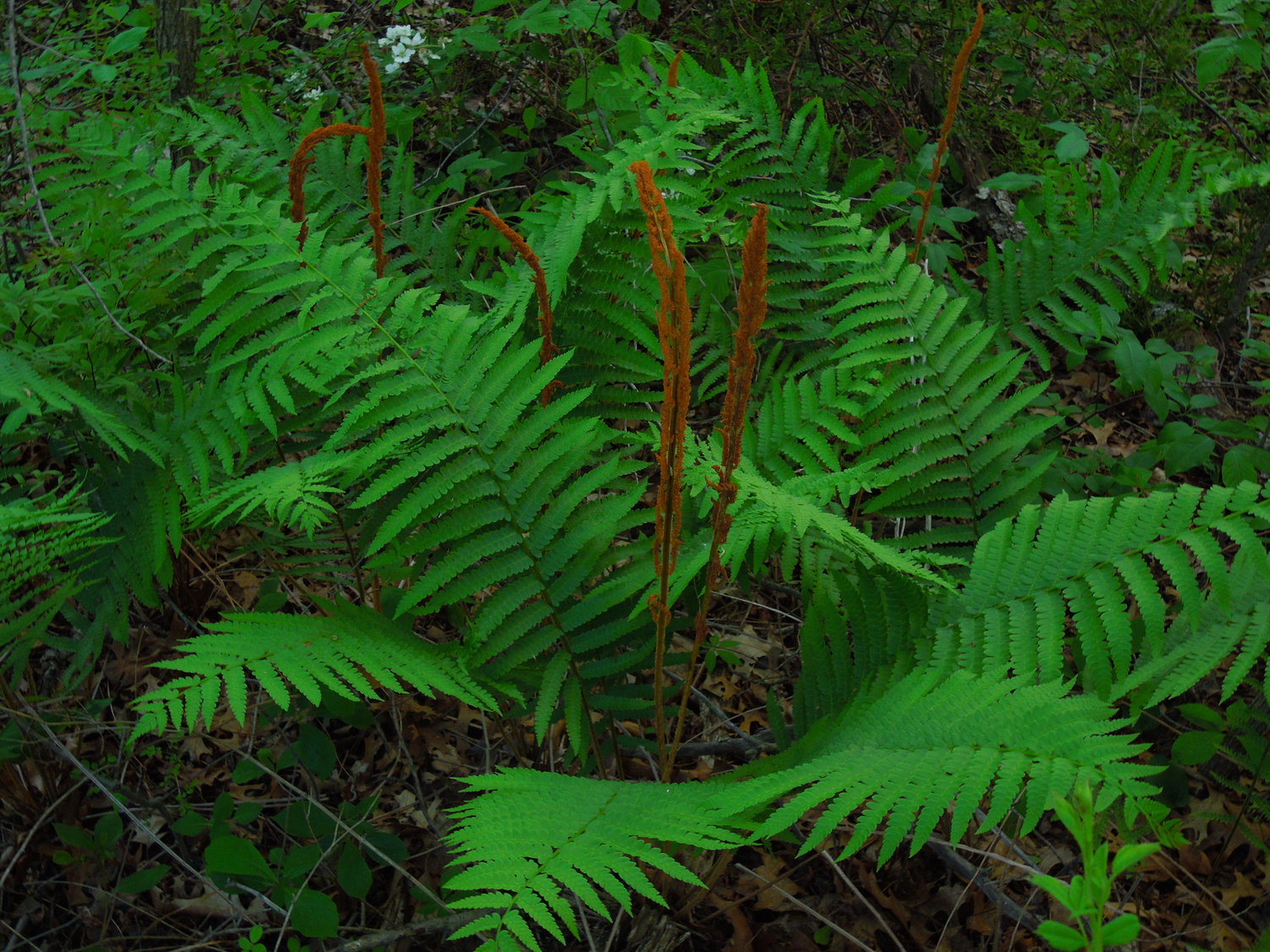 Cinnamon Fern, Osmundastrum cinnamomeum (Osmundaceae)
On our most recent field trip with the Dade Chapter near Turner River Unit in Big Cypress, Elizabeth and I saw the somewhat common Pine Fern, Anemia adiantifolia (Anemiaceae), the photo above, but she remarked about its two spore spikes. That got me thinking about two other South Florida ferns with spore spikes, Cinnamon Fern, Osmundastrum cinnamomeum (Osmundaceae), and Royal Fern, Osmunda regalis var. spectabilis (Osmundaceae). Osmundaceae is in a different phylogenic Order than the Family, Anemiaceae, but all three are related to genera that existed during the Jurassic. Check  Cinnamon Fern origins and Royal Fern origins for more details. The Royal Fern family may trace origins back to the older Triassic era, but I am in no position to quibble the eras. 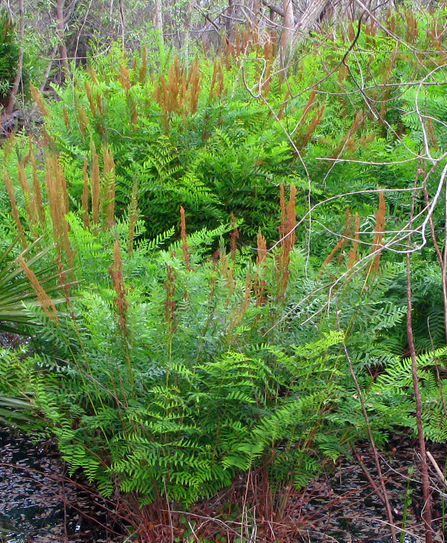 Royal Fern, Osmunda regalis var. spectabilis (Osmundaceae)
Photo: Alan Cressler
According to research by Paulo Labiak, Universidade Federal do Paraná, Brazil, “Anemiaceae [The Pine Fern family] is one of the most ancient extant fern families, with fossils known since the Jurassic.” The family, Anemiaceae, is represented by the single genus, Anemia, and has about 115 living species distributed throughout the tropical and subtropical world. The phylogeny (evolutionary history) is, of course, complex and inevitably incomplete, but characterized by having sporangia with “subapical annulus and striate tetrahedral spores.” I would need a microscope and a little experience to confirm (smile). Roughly speaking, our Pine Fern, Anemia adiantifolia, has spore packets on those spore spikes that Elizabeth noticed that are characteristic of the genus, Anemia, presumably back to the Jurassic period, 200 million years ago.
Look for and protect these three ancient ferns in Fern Forest, Hillsborough Pineland, Pond Apple Slough, Miramar Pineland, Francis S. Taylor Wildlife Management Area, Doris Davis Forman Wilderness Preserve, Coconut Creek Maple Swamp, Tree Tops Park, Secret Wood Nature Center and other places (even unprotected roadside and private property). Native nurseries sell Royal Fern and, less often, Cinnamon Fern. I know one person in Broward who is growing Pine Fern, but has no babies yet. Even if harder to cultivate, we should try to grow Pine Fern for its protection and our interest and enjoyment. Please just never take plants or their reproductive parts from the wild. We are too many and they are too few. We can obtain legally-acquired plants, seed, or spores from plants in cultivation, if we look hard enough and ask other responsible enthusiasts.


It would be reckless science for me to assume that spore spikes are a fern characteristic with ancient origins (a fact I haven’t studied), but in this case my hunch was apparently right. All three Broward ferns have very ancient origins. The notion of “living fossils” is a simplified concept not entirely accurate because plants continue to evolve over the eons splitting off into new variations and species along the way. However, the featured photo in this eNews header of a Jurassic fern fossil shows how remarkably similar Cinnamon Fern is to its Jurassic ancestor. A living fossil isn't far off the mark. To my mind and heart, it is very cool to look at these living ferns with a lot of respect and try to imagine them in ancient forests and habitats where dinosaurs thumped and dined.