September 30, 2018
On January 20 2018 several members of the Paynes Prairie chapter traveled to Ashton Biodiversity Research and Preservation Institute (ABRPI). Chase Pirtle, the animal care specialist and habitat manager met us at the gate. Chase is an authorized Gopher Tortoise Agent and an instructor and private land manager for the Eastern Diamondback Conservation Foundation. He also holds a FWC venomous license. 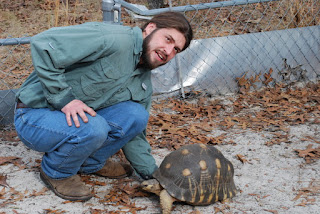 We drove in to the Headquarters and met Maggie Curtis, also a biologist at Ashton who assists Chase in the management of the facility. The headquarters also serves as an incubator, nursery and cold weather shelter for the tortoise collection. In large tubs and kiddy pools filled with pine needles and turkey oak leaves are several Radiated Tortoises (native to Madagascar) and a Yellow Footed Tortoise (native to South America).

Radiated Tortoises are critically endangered in Madagascar and these are the descendants of individuals collected for the illegal pet trade and confiscated at airports. Chase told us
that they move the smaller tortoises into the building when the weather turns really cold. 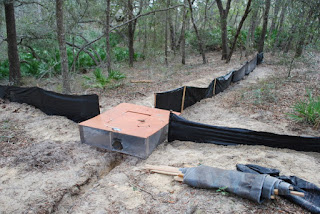 They keep the lights off and the temperature cool to simulate winter so the tortoises behave normally as if they were outside. It seems to work since they were all hunkered down and not trying to escape. We toured the nursery room in which several bins hold young Radiated Tortoises of different sizes. They remain in the nursery from hatching until they reach 150-200 grams and are too big to become lunch for crows and
other predators outside.

After reaching this threshold they get to live outside, unless the weather gets too cold. There is also a small incubator room where Leopard Tortoise eggs were hatching even as we watched. While the females will lay eggs outside, the hatching rate is very low and the few that do hatch rarely survive. Hatching and survival is much improved by incubating the eggs. 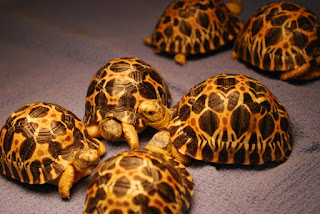 From the incubator they go to the nursery and then outside. Sadly, there isn’t enough intact habitat on Madagascar to return them to the wild so at some point in time they may be exchanged with other certified organizations elsewhere. Just outside are the outdoor holding pens which are delineated by 2 foot tall fencing. They are mostly open with some natural vegetation. Tucked away in corner shelters are large adults (Radiated Tortoises, Leopard Tortoises and one Bolivian Red Footed tortoise) who can tolerate the temperatures. FYI, Red Foot tortoises like to have the rear of their carapaces scratched and Radiated tortoises like to have their bellies rubbed. One female followed Chase through the paddock after a nice belly rub.

We had a quick look at the raised garden in which Chase grows vegetable for the tortoises. Some beds are in very large basins and some were in refrigerators which Chase acquired for free and hollowed out and drilled holes in to make a perfectly fine raised bed for the vegetables. He intends to plant native fruiting plants around the perimeter of the garden and the holding pens to supplement their diets.

We then piled into vehicles to tour the Preserve property as well as some of the adjacent property. Naturally it is all longleaf pine and scrub oak sand hill ecology. Chase has negotiated with some of the surrounding property owners to purchase the land or have the land designated as conservation easements. Ultimately he is trying to create a natural corridor from Goethe State Park to Watermelon Pond Wildlife Management Area.

There are roughly 500 gopher tortoises on the Preserve and the adjacent properties, all of which were hunkered down waiting until the temperatures rise to a reasonable 70° or so. If temperatures remain cold for extended periods the tortoises go into a hibernation-like stage called brumation. Gopher Tortoises are a keystone species and at least 411 other animal and insect species are known to use their burrows. Chase is fortunate to live in one of the facilities on the property. There is another facility for long term volunteers and researchers.

After our trip through the woods we returned to headquarters and took a quick look at a drift fence which is used for catching reptiles for collecting census data. This was an excellent trip. ABPRI does great work.