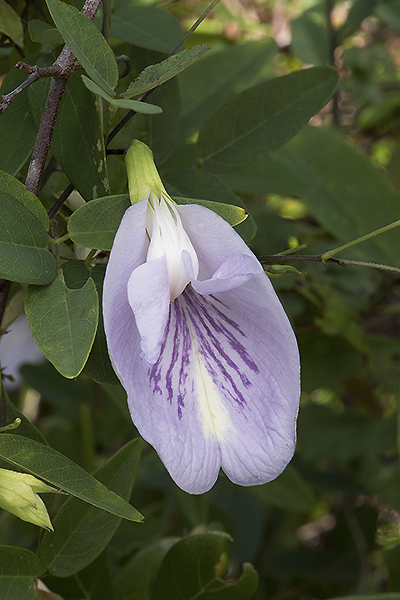 The upper leaves of this vining species have 3 ovate to ovate-lanceolate leaflets that reach up to 2½" long and ¾" wide. The violet or pink flowers reach 2" long. A similar, related, endemic species (Clitoria fragrans) has narrower leaflets, sweetly fragrant flowers, and is known only from the Lake Wales Ridge in Lake, Orange, Polk, and Highlands Counties.

Atlantic pigeonwings blooms in March and continues into October, so look for it in sandhills, scrub, and forest margins throughout much of mainland Florida. For butterfly gardeners, it is a larval host plant of the long-tailed skipper, hoary edge, and southern cloudywing butterflies.

Clitoria alludes to the similarity of the keel of the flower to a clitoris on female genitalia. When the rather risqué genus was first named by Carolus Linnaeus (1707–1778) in 1753, he received sharp criticism from other taxonomists of the time.

The name mariana relates either to plants with mottled leaves or species from Maryland. In this case, it was named for Maryland It ranges across the entire eastern United States westard to Arizona, Kansas, Nebraska, and Minnesota. Other members of the genus occur in Asia and Madagascar and some have flowers that are used to dye rice blue, or the flowers are dipped in batter and fried. Clitoria ternatea is naturalized in Florida from Ternate Island in the Maluka Island chain in eastern Indonesia and has dark blue flowers. The plant photographed was in Oscar Scherer State Park in Sarasota County, blooming in March along the nature trail that leads through the sandhills.