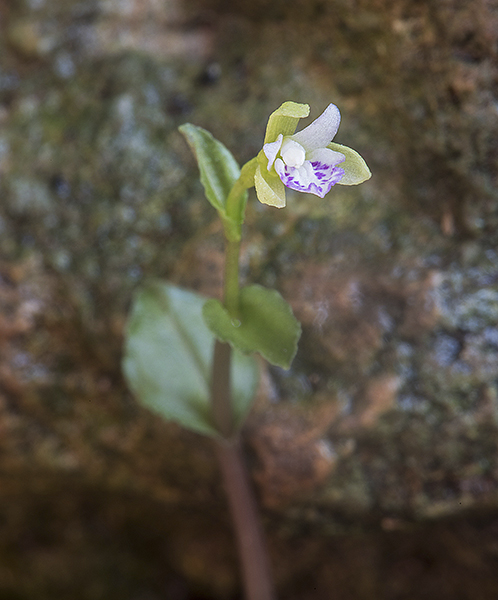 The fragile, succulent stem of this native orchid averages 1"–2" tall with 1–4 broadly ovate, 3/8" leaves that are dark green above and purple below.

Flowers are about 3/16" wide and last only 2 hours in the morning. Plants often produce 2 buds that open a week apart. What this means is that you need to be standing in front of plants in bud during June and July at about 10:00 o’clock in the morning and, if you’re lucky, a flower will open. A clue to a bud opening is it stands straight up the day before if opens. Otherwise the buds are nodding. If you miss it, you’ll have one more chance the following week. If you miss that chance, then you’ll have to wait another year.

It is endemic to mesic forests of Citrus, Sumter, Hernando, Highlands, and Collier Counties and can be regarded as one of the rarest wildflowers in the state, and easily the most difficult to find in flower.

Triphora means “3-fold” and “bearing,” and alludes either to the 3 flowers or the 3 crests on the lip of the type species (the species used to describe the genus). The name craigheadii honors Everglades National Park biologist Frank C. Craighead (1890–1982). This state-listed endangered species was described in 1966 by physician and botanist Carlyle A. Luer (1922–) from plants discovered in the Withlacoochee State Forest in 1965. Due to recent taxonomic revisions, it is currently regarded as Florida’s only endemic orchid.