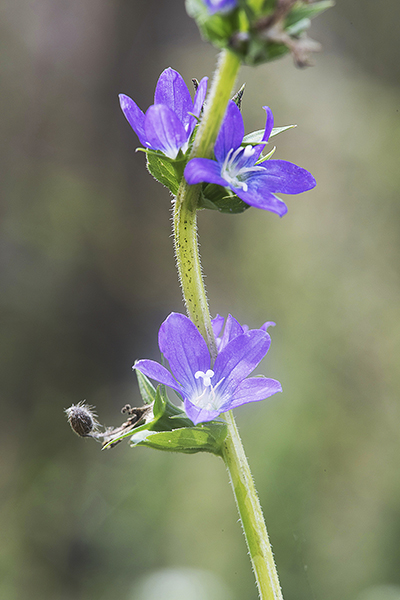 Venus’ looking-glass is a native herbaceous annual with hairy, ribbed stems and ovate to elliptic, alternate, clasping leaves that reach about ⅜"–¾" long. The axillary, sessile, 5-lobed flowers measure about ⅜" across.

Look for this species from February into May, mostly along roadsides and other disturbed sites through the Florida panhandle, across the northern peninsula, and south in the peninsula to Pinellas, Hillsborough, Hardee, Polk, Osceola, and Volusia counties. Globally it ranges from Argentina northward throughout the United States into British Columbia, Ontario, and Quebec.

Native Americans made a tea of the roots and leaves to help relieve indigestion and also “to make one sick all day” as a treatment for overeating. The leaves were also smoked during ceremonies.
Triodanis means “three-toothed” and possibly relates to the 3 calyx lobes on some flowers or the pores on the capsules. The name perfoliata refers to the stems that seemingly perforate the leaves. Belgium-born botanist and reverend Julius Arthur Nieuwland (1878–1936) placed it in the genus Triodanis in 1914. The common name alludes to the shiny seeds that resemble a looking glass, or tiny mirrors. Bees and small butterflies visit the flowers while buntings, goldfinches, and sparrows eat the seeds. One other species in Florida, Triodanis biflora, ranges discontinuously across the panhandle south in the peninsula as far as Highlands County