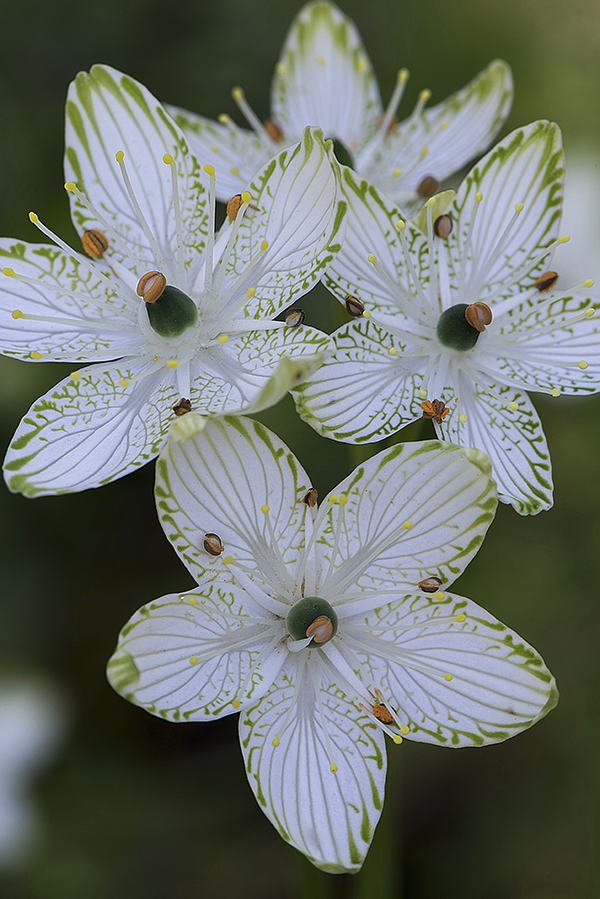 Grass-of-Parnassus or bog-stars (Parnassia grandifolia) is one of Florida’s prettiest wildflowers. The oval, somewhat succulent, shiny leaf blades measure 1½"–4" long with long petioles (leaf stems), and the flowers measure 1½" wide with intricate green, brown, or yellow venation on the petals. Look for it flowering along shaded stream banks and cypress bogs in Liberty, Franklin, Putnam, and Marion Counties. The plant photographed was blooming in the Apalachicola National Forest in November 2016 but its bloom season lasts through December.

Parnassia was named for Mount Parnassus in Greece and it is said that cattle grazing on the mountain relished eating the local Parnassia palustris, so the ancient Greeks made it an “honorary grass.” The name grandifolia relates to the large leaves compared to other species, which in no way resemble a grass. Some members of this genus live in arctic and alpine regions and are a symbol of the Highland Scottish Clan MacLea, formally recognized in 2003. There are 3 parnassia flowers on the British flag of Cumberland County, adopted in December 2012. It is in the Grass-of-Parnassus Family (Parnassiaceae) but is sometimes included in the Saxifrage Family (Saxifragaceae) or the Stafftree Family (Celastraceae). It sometimes grows in the company of Parnassia caroliniana.