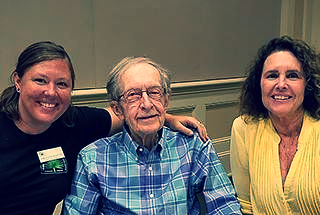 Bill Partington was a founding member of the Florida Native Plant Society (Tarflower Chapter) and a champion for Florida’s natural environment. He was Director of FNPS from 1979-1985. During that time, membership grew from 6 people to over a 1000. Bill Partington was well known for publishing an annual “calamity calendar” in the 1990s, featuring cartoonists that made fun of Florida’s gator attacks, hurricanes, and overcrowding. He wrote many articles and took photos for the Florida Audubon Society, New York Geological Society, Wilderness Society magazine, several wildlife books, and numerous columns on the environmental impact of the Cross Florida Barge Canal (now called the Marjorie Harris Carr Cross Florida Greenway). Bill graduated from Williams College in Williamstown, Massachusetts in 1960 with a bachelor’s degree in Biology. Williams College awarded Mr. Partington in 1995 their coveted bicentennial award in distinguished career achievement. In 2000, FNPS presented Bill with the society’s highest award, the Mentor Award, to Bill, for his tireless conservation activism.

The Tarflower Chapter was fortunate to have Bill as a member of their chapter. FNPS and Tarflower members valued his knowledge, enthusiasm and his sense of humor, as noted in these personal tributes from the November 2017 issue of the Tarpaper.

“When Bill Partington gave lectures to Audubon or the Native Plant Society you could hear a pin drop in the room. He once gave a talk on wintering Monarch butterflies of central Mexico, with pictures which he took himself. That Monarchs migrated to one spot was a newly discovered phenomenon and he brought the news back firsthand.

In another talk about micro-photography, with a camera and light setup he created, he showed fascinating, very colorful pictures of plants, caterpillars and birds common to central Florida. The close-ups were so close, showing tiny structures in a Blue Jay's feather, leaf margins and the internal physiognomy of flowers, that it was a look at a world that cannot be seen at a casual glance, yet is everywhere. His work was between normal vision and molecular photography.

Bill always expanded the information one already knew, providing deeper perspective and greater respect for what's out there. His quiet manner, gentle humor and constant curiosity about our environment, even in his backyard (which is where a lot of the microphotographs were taken), were always appreciated. He spoke up when attractive ideas, such as the Cross-Florida Barge Canal, would cause harm to the State and steered it away from permanent damage. For fifty years or more he was a soldier for Florida, a guardian who really did think globally and act locally, quietly but effectively. I don't know the half of his efforts. It's not how life is made, but if ever there was a person who should have kept on living a little longer, it was Bill. His last talk for Native Plant was about the environment-saving heroes of Florida, defenders who guided our State. He was among those stalwarts."​
Cecilia Catron, Tarflower Member

"Thank you, Bill Partington, for being a fierce advocate for Florida's environment and for the role you played in getting the Florida Native Plant Society up and running. Your words expressing concern for activism and desire that FNPS be more activist continuously run through my mind. Rest in peace and our warmest regards to your family."
Cammie Donaldson, FNPS Administrative Services

"Bill, myself, plus 3 or maybe four others started the first conversations about having a Florida Native Plant Society.  Bill’s determination and humor kept us from straying too far from the mission of creating FNPS.  Without his generosity of providing his name, contacts, and office I don't know where the Society would be.  When we grew to 35 members, Bill decided we should have our first State Conference.  Through his connections, Rollins College let us use their facilities...for free!  I think we generated a couple of hundred paying new members from the conference, and we were off with Bill Partington in the lead."
Carol Sawyer Lotspeich, FNPS   founding member

"Bill was presenting at our Tarflower meeting just eight weeks ago. I clearly recall many people that I have never seen attend his presentation on important movers and shakers in the early days of when the term "conservationist" was still being coined. It is my understanding that September 6th's meeting was well attended not just by Tarflower, but also by Orange Audubon Society. After all, Bill was Assistant Director for the Audubon Society from 1967-71 and his interests covered both plants and birds.

I have enjoyed spending time with Bill during the last months of his life. Even then, he had a light-hearted, energetic charm about him. And he certainly had charisma- that only certain people possess and even fewer radiate. Our conversations were never boring- not even for a second. I observed, even in his declining health, that he was never truly concerned about his mortality. His eyes were eternally curious- brimming with questions and ideas- but he exercised restraint and timing via his wit and word choice. I found that most remarkable. Once, while visiting his home, he stopped our conversation dead in its track to admire a hummingbird outside his dining room window feeding on a Hamelia Patens. Unlike me, Bill knew when to pause business and smell the roses. I could take a page from him on that."
Mark Kateli, Tarflower Chapter Treasurer and Assistant State Treasurer

"My introduction to Bill Partington was a phone call from him to write something for the Florida Native Plant Society newsletter, which was still in the embryo stage. The Florida Audubon Society's magazine, The Florida Naturalist, had published a few articles I had written about edible wild plants, and I guess he thought I might come up with something for this new organization.

I wrote a short piece about the Sabal Palmetto that I called "The Aeolian Harp Tree" and took it over to him in Winter Park. I asked a question or two about the newsletter and found out that it didn't yet exist. So I volunteered to get it going and became the first editor of The Palmetto, a position I held for the next 15 years.

FNPS was organized in 1980 under the umbrella of the Environmental Information Center in Winter Park, of which Bill was the director. Bill remained the director of FNPS until 1986.

Bill was full of good ideas and had good organizing skills. He organized the first conference at Rollins College, bringing in fine speakers from his many contacts. He encouraged chapter building and had each new chapter plan the next annual spring conference, then started having fall mini-conferences, too.

As director of the Environmental Information Center, he also published Enfo, a newsletter of environmental concerns, and the Solar Coalition newsletter. He led environmental trips in Florida, to nearby states, and to Costa Rica (which my parents and my husband and I went on). I loved his Calamity Calendar, making fun of Florida's many mishaps to discourage new residents, and his bumper stickers that said, "Leaving Florida? Take a friend."

His leadership gave the Florida Native Plant Society a good start in its first five years. When FNPS decided to "go it alone", Bill was given a life membership."
Peggy Lantz, Tarflower Chapter and first Palmetto editor