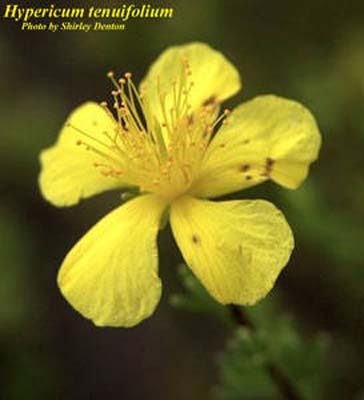 Of the thirty-one species of the genus Hypericum that have been vouchered for the state of Florida according to the USF Plant Atlas, twelve may be found in Hillsborough County. The genus has been known world-wide since pre-Christian times for its healing properties and each people group has given it common names of their choosing. One of the beliefs of the Romans and Greeks was that the flowers were sent by the gods to provide a holy sacrifice to repel evil, the Greeks naming it Hupereicon and the Romans, Hypericum, meaning perhaps the plant had power over evil. A sacrificial ritual would take place annually during Summer Solstice, also known as Midsummer’s Day, the flowers being thrown on fires to appease the gods. With the advent of Christianity pagan rituals were incorporated with church-based festivals. Thus, because St. John’s birthday was near to Midsummer’s Day, the European species, Hypericum perforatum, which usually bloomed at this time, was given the common name of St. John’s-wort in his honor; “wort” meaning “plant”. As new species were discovered in the New World, other Hypericum species were also called St. John’s-wort of one adjective or another. St. Peter’s-wort and St. Andrew’s Cross were also named in honor of these respective saints.

Our St. John’s-worts have so much in common that they are not easily identified as to species, but recognizing the genus Hypericum is almost half the battle. They all have leaves and branches that are placed on opposite sides of each other. Their leaves and green sepals and sometimes even their petals and stems are dotted with translucent sunken glands or colored dots. Their flowers are yellow to yellow-orange and they bloom from summer to fall, some as early as spring. Their fruit is a capsule with many small seeds. They are to be found growing mostly in wet or moist acid soils and a few in dry sandhills and coastal scrubs. Most are perennial evergreen shrubs and a few are annual or perennial herbs. 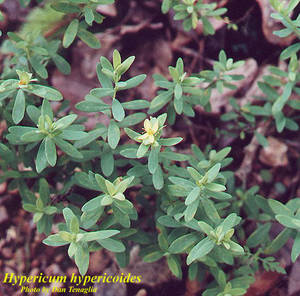 Three of our species have 4 petals instead of the usual 5; the petals are placed to look like the letter X. Hypericum hypericoides or St. Andrew’s Cross is the one shrub we most often see on field trips. It’s a bit funny that its name actually translates to mean a Hypericum that looks like a Hypericum. It’s a medium-sized shrub with many small, very leafy branches. With magnification one may see the 2 styles atop the developing fruit capsule. The styles connect the pollen on the stigmas to the ovary or seed pod. The flower has 2 large outer sepals and 2 very small inner sepals, with a pair of tiny bractlets just beneath the flower. Hypericum crux-andreae, whose name seems to translate to St. Andrew’s Cross, is instead named St. Peter’s-wort. Like H. hypericoides it is a medium-sized shrub but has several differences. It has fewer branches making it look less dense; its leaves are a bit longer and broader, and it has usually 3 but sometimes 4 styles instead of 2. It is found in seasonally wet woods throughout our state but is more prevalent in north Florida and the Panhandle. 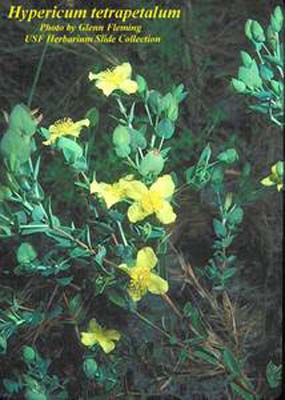 Our third species of 4 petals is Hypericum tetrapetalum or Fourpetal St. John’s- wort. Its leaves are heart-shaped just like its 2 larger sepals. The 2 lobes of the leaves clasp the stem just as the large outer sepals clasp the developing fruit; the 2 inner sepals are narrower than the outer ones. This species also has 3 styles.

The remainder of Hillsborough County Hypericum shrubs will have 5 petals, 5 sepals and 3 styles and can be divided by their leaf types. We have 3 species with needle-like leaves. 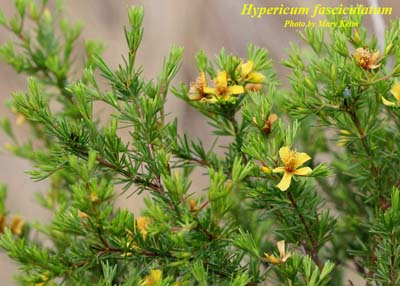 Hypericum fasciculatum, so called because its needle-like leaves appear to be in fascicles or bundles,
can be over 5 ft. tall. Sandweed, as it is commonly called, has midstem leaves 13 mm long or longer; it is often found surrounding the margins of ponds and swamps, and will sometimes develop prop roots if inundated for long periods. 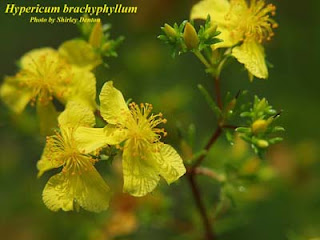 The stem leaves of Hypericum brachyphylum are 11 mm. long, and its height is a bit shorter than H. fasciculatum. Its common name, Coastalplain St. John’s-wort tells me it can be found in dry as well as wet sites. “Brachy” means short and “phylum” means leaf. 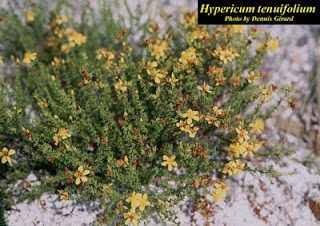 Hypericum tenuifolium was previously named H. reductum. Its new name translates to slender
leafed. It’s quite easy to identify because of its low height, less than knee-high, and its branches that often lie on the ground and take root. 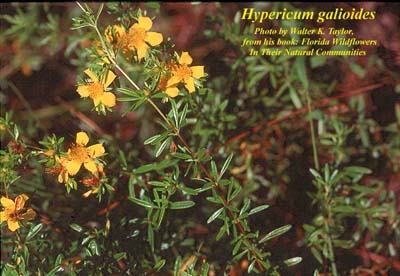 Three shrub species in our county with 5 petals have broad leaves.

Perhaps I shouldn't mention Hypericum galioides, Bedstraw St. John’s-wort. It is common in north Florida, but Hillsborough County has only one record of a specimen collected in 1843. 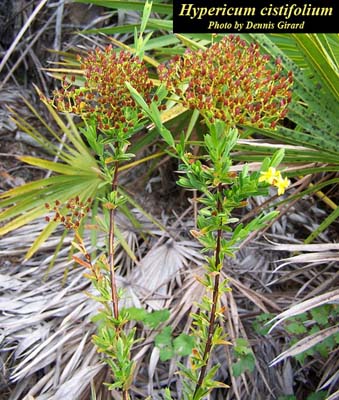 Hypericum cistifolium is striking for its combination of colors, bright yellow flowers and glossy, mahogany-brown capsules. It has simple stems with stiff, oblong leaves, each pair of leaves at right angles to the next pair, with the stems terminating into branched inflorescences. It grows in wet woods to about waist-high. 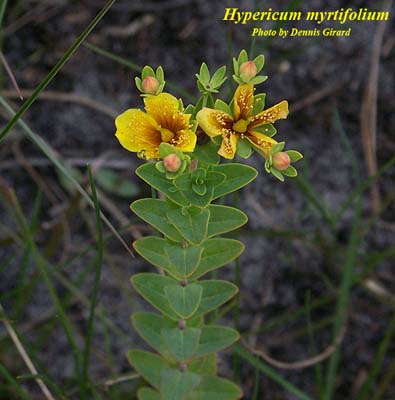 Hypericum myrtifolium is another beauty about waist-high, leaves with somewhat heart-shaped bases lightly clasping the stems, flower buds pink-tinged and petals that bend backwards to expose a large, rounded cluster of yellow to yellow-orange stamens. It can be found in wet woods and pond margins.

The remaining three Hypericum species in our county are herbaceous plants with 5 petals and sepals and 3 styles. 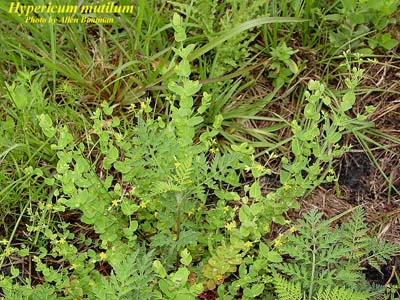 Hypericum mutilum, Dwarf St. John’s-wort, is a perennial not more than 10“ tall. Its sessile leaves
are thin, about one inch long with rounded tips. The solitary stems branch at the apex into a leafy inflorescence. It grows in wet, sandy areas. 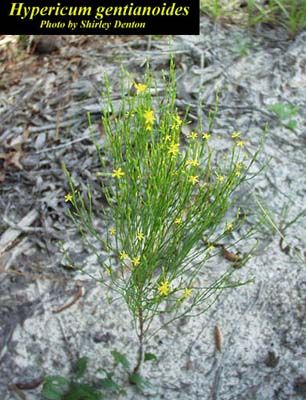 Hypericum gentianoides, Pineweed or Orange-Grass, is so called because its flowers are yellow-orange in color that gives the plant an orange aura. It’s about knee-high and can be found in pond margins as well as disturbed dry soil. Its scale-like leaves appressed closely to the stem gives the plant a wiry look. Its tiny flowers are on terminal branches. 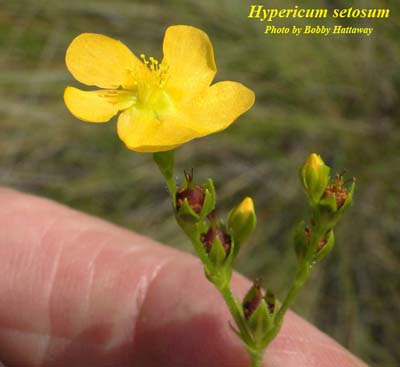 Hypericum setosum is either an annual or biennial. Its common name is Hairy St. John’s-wort. I’ve
never seen it before but I may be able to recognize it in wet flatwoods or bogs for its mostly solitary stems, 1-3.5 ft. tall, and very hairy leaves growing straight up the stems. It’s more commonly found in northern counties but has been vouchered in Pasco and Hillsborough counties.

Dan Austin has a lot of information on the history of Hypericum in his book Florida Ethnobotany
book. Godfrey & Wooten’s Aquatic and Wetland Plants of Southeastern United States book has wonderful line drawings. The USF Plant Atlas has photographs, maps, and specimen photos with a lot of information on the plant labels as to where, when, how often and by whom they were found. Plant keys by Wunderlin & Hansen as well as Clewell help to determine arrangement of plant characteristics. And Walter Taylor has photos with descriptions in non-scientific language. Thankfully there are many avenues available for help in identifying our many beautiful and interesting native plants.