An Essay by Devon Higginbotham and A Poem by Donna Bollenbach 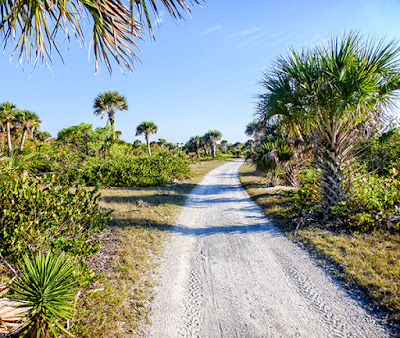 West of Fort Myers, past the shopping malls, gas stations and fast food restaurants, is a place constantly shifting, and yet, frozen in time. Cayo Costa is a barrier island off the coast of southwest Florida, an hour by ferry from the hamlet of Bokeelia, accessible only by boat. It is a state park, one of 161 in our great state, and this one has camping, cabins for rent, miles of empty beaches, hiking trails, plenty of wildlife and native vegetation but no electricity, hot dog stands or hot water.
This is one place where you don’t want to forget anything.
To get there, several concessions offer daily round-trip transport for around $45, camping gear included. We took the Tropic Star ferry, which takes you past Little Bokeelia Island (population, two caretakers). It was previously owned by Charles Burgess, of the dry-cell battery fame (Burgess Battery Company eventually became part of Duracell), though it recently sold to the highest bidder for $14.5 million.
Once on Cayo Costa we were greeted by a lovely New Hampshire couple who weren’t sure if they had discovered paradise or purgatory. They had started a six-week campground host position in March, and the spring weather quickly descended into summer, bringing with it the trifecta of heat, humidity and human blood-suckers.
The couple operated the shuttle, ferrying camping equipment, coolers, air mattresses, umbrellas, lanterns, and everything essential to surviving — and then some. While some go to Cayo Costa to hunt shells, escape the city or run away from life for a while, our group came to see the native habitat.
I had been to Cayo Costa 20 years earlier and encountered the removal of the Australian pines that were dominating the island at that time. Although they provided terrific shade, they were an exotic species that crowded native plants, taking over.
It was thrilling to see the transformation of native trees, such as the gumbo limbo and sea grape, growing to 30 feet tall and shading campsites that used to be surrounded by Australian pines. Some massive stumps still remain as stark reminders of their past reign, like footprints from a past empire.

The exposed west coast is windswept and sparsely populated by sea oats and railroad vine, but as you travel inland, you encounter dense growths of cocoplum, myrsine, wild coffee, wax myrtles, cabbage palms and necklace pods, all growing on the remains of old sand dunes. You can see areas where the waves washed over land in storms, depositing their salt in shallow areas.
The prickly pear cacti were in full bloom with their bright yellow blooms covered with beetles seeking pollen. Coral bean were triangular spikes of tubular red blossoms, resembling Asian structures. Moving further east you enter a pinewoods forest with slash pines, oaks and the healthiest poison ivy I have ever encountered. If I were to live on the island, this is where you would find me.
The island was inhabited long before it became a park. Approximately 20 fishing families lived on Cayo Costa in the early 1900s, where they established a school, post office and grocery store. The old cemetery attests to human settlement and the “Quarantine Trail” gives clues to the islands past life. One grave is marked Captain Peter Nelson, died Sept 7, 1919, age 80 years. “After life’s fitful fever, he sleeps well.” Apparently, he too, was fodder for the mosquitoes, no-see-ums and chiggers.
____________________________________________

There are no bumper stickers here
with the message “I am a Native.”
Just tangled mangroves, thick,
along the sandy shore.
Cabbage palms, oaks, and pines
recede into coastal strands and
maritime hammocks.

No tee shirts proclaim “I am not a tourist.”
Just sea grapes, with twisted trunks,
waving plump leaves splotched
in green, yellow, and red,
along the sandy trails.
Saw palmettos grow thick under
a cover of slash pine.

There are no doormats that say “Welcome,”
but the plentiful fruits of the
golden creeper, coco plums, and
gopher apples blanket the ground.
They are ripe for sharing.
The wildlife eat their fill,
and scatter seed for next year’s bounty.

The natives don’t make trinkets to sell,
but offer colorful gifts from the sea,
free to guests who stroll the beach.
Whelk, conch, tulip, and olive shells.
Sand dollars, starfish, urchins, and
the occasional shark’s tooth.

The natives on this island are colorful:
Inkberry, bright green, with white
fan-like flowers dress the dunes,
while the prickly pear cactus, spiny,
with showy yellow blossoms
paint the coastal grasslands.
Crimson spikes of coral bean splash
red in the maritime forest., while
lush green robust vines of poison ivy
cloak the trees.

The natives on this island are
good neighbors.
They feed and shelter their own.
The gopher tortoise shares
its burrow with snakes, rabbits,
toads, lizards and mice.
The birds find cover in thickets,
while alligators lie lazy on the banks
of the lagoons.

The natives on this island are content.
They are native born and raised.
They don’t need to wander
to find themselves,
They are already home.
###

If you want to make your own journey to Cayo Costa, note this:
Hours: 8 a.m. to sunset, 365 days a year
Accessible only by private boat or ferry. There are several private companies offering ferry service from different locations and at varying times and days.
Cost: $2 admission fee to day trippers. Camping fees for a tent site are $22, and cabins are $40 per night. Boat camping is $20 per vessel per night.Ferry to and from for campers; $45.00
Reserve: ReserveAmerica.com.Reservations can be made up to 11 months in advance.
camping Cayo Costa State Park coastal Florida florida native plants Florida's state park island native native wildlife poetry
Location: Cayo Costa State Park, Florida 33924, USA

Gene said…
This is one of my personal favorites among our wonderful state parks. Your visit did it justice. I haven't been back myself since 2006, at which time the impacts of Hurricane Charlie's recent passage underscored your point about "a place constantly shifting, and yet, frozen in time". Your photos convey Mother Nature's ability for rebirth.
May 17, 2016 at 1:12 PM