A Walk in the Florida Dry Prairie 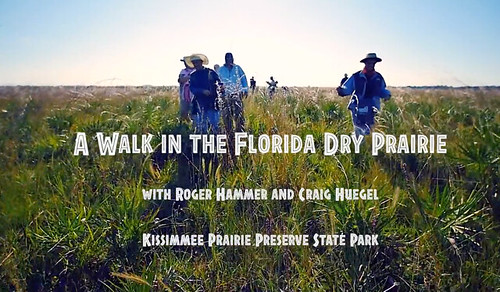 A Walk in the Florida Dry Prairie began serendipitously at the May 2014 FNPS conference while at the Saturday night dinner social.  The Education Committee had an impromptu meeting with Richard Brownscombe, Ellen Broderick, joined by Kellie Westervelt, Cammie Donaldson and myself in attendance.  The idea of filming a field trip was floated with proposals of who should guide and what location.  Cammie suggested that the Friends of Kissimmee Prairie Preserve State Park had asked Roger Hammer to guide a field trip planned for November 1, 2014.  Subsequently, Craig Huegel was also asked to join. Christina Evans of both the Florida Native Plant Society and Friends of KPPSP suggested that we use Jennifer Brown of Into Nature Films to do the video shoot.

With the whole team assembled, the Education Committee produced the following Work Plan with assistance from the Executive Director, Kellie Westervelt, and the Communications Committee:

Project Description:  This project will film the above titled field trip hosted by Friends of the Kissimmee Prairie Preserve State Park on November 1, 2014.  The film will capture well-known naturalist and Society member Roger Hammer as he describes the plants, habitats and history of the preserve.  Mr. Hammer will be accompanied by other Society members, such as Craig Huegel.  The field trip will be filmed by Jennifer Brown of Into Nature Films.

Goals:
• To educate a broad audience about Florida native plants and Florida native plant communities through the medium of film.
• To promote the Society’s mission, membership and field trips that provide education about Florida’s native plants in their communities and habitats and special places like Kissimmee Prairie.
• To develop a pilot film/prototype to test effectiveness of the medium and distribution in promoting the Society in general and FNPS field trips specifically.  If successful, could launch a film series showcasing a variety of excursions into nature led by knowledgeable and personable FNPS members and/or partners.
• To create an educational and marketing tool as a springboard to develop or expand other FNPS programs (e.g. educational field trips; existing field trips; education and outreach).
• To record for prosperity footage that captures Florida’s unique landscapes as they exist today and document the botanical knowledge, personality and style of some of our most iconic field trip leaders through a series of videos.

Target Audience: General adult and young people curious about native plants, teachers, local population and visitors to the Prairie, individuals who have never attended a FNPS field trip, CPALMS (a clearinghouse for educators sponsored by the State of Florida). 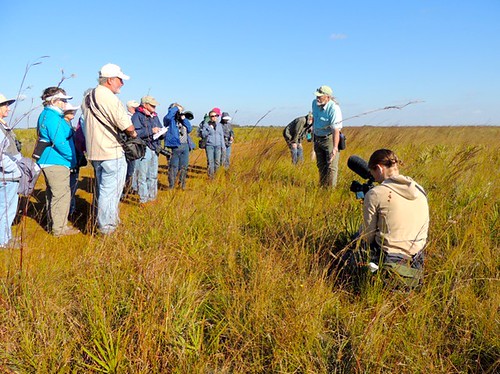 Distribution: Shoot film at the highest resolution possible to keep all distribution options open.
• FNPS Website (page dedicated to field trips with unique URL).
• All FNPS social media outlets.
• Write blog, Facebook, and other online articles about film with download link or link to embedded video and employ viral strategies to direct traffic (e.g., email contacts, twitter, etc.).
• You Tube:  FNPS can create a You Tube Channel, where this, and any subsequent films can be uploaded and number of hits tracked, e.g. the Knowledge Network.
• Educational Websites such as CPALMS and LEEF
• Possibly PBS/Public Television
• Physical Installations like Visitor Centers (DVD format).

Evaluation Mechanisms:
• Track number of hits from FNPS Website, YouTube Channel, Twitter statistics on “film” hashtag; etc.
• Track number of teachers using the film through CPALM (need to determine how and what they capture from downloads)
• Include question on how participants learned of FNPS field trips using Survey/Sign-In formats to determine films effectiveness at promoting field trips.
• Develop Field Trip page on FNPS Website with a unique URL so number of hits can be determined.

The Work Plan was a good starting point and guide, although it was modified as needed while filming guide  in order to achieve the best final product.

Ultimately, the title was changed to “Walk in the Florida Dry Prairie." Jennifer Brown began  filming on October 31, 2014 - the day before the walk was scheduled to take place.  She interviewed Roger Hammer and Craig Huegel while they scouted out the best areas for viewing wildflowers and other interesting components of the Dry Prairie Ecosystem.

November 1, 2014 was the official field trip day. It was cold, windy, beautiful, and FUN! Two walks took place - one in the morning and another in the afternoon. The number of people who could attend each walk was determined by the maximum capacity of the swamp buggies that took them into and out of the prairie while providing a rich panoramic view.

After filming was over, the drafts were reviewed by the Education Committee, Shirley Denton and Craig Huegel.  The first draft was presented to the FNPS Board of Directors and Council of Chapters 2015 February Retreat at Archbold Biological Station. The film was finally finished after the Education Committee considered all feedback and comments and made any necessary corrections. We hope you enjoy it! Here's the link again, for good measure: A Walk in the Florida Dry Prairie