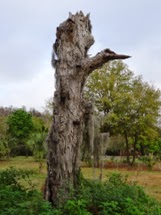 They were driving me nuts!  I have a couple dead Pecan trees in my yard and periodically they drop large dead limbs with gobs of moss.  It’s been a long time since I have seen a green leaf on either of them.  The wood is decayed and crumbly so it’s not difficult to collect the fallen limbs (there are no branches left) but I was dying to chop them down.

Last month, as I lugged another fallen limb to the trash, I looked at one trunk that had slowly dwindled down to 20 ft in height. There is a hole at the base of the tree large enough for a family of hobbits to pass through.  The interior is dark and mysterious and I envisioned a raccoon charging out, obviously very inconvenienced by my snooping into his home, but all I saw was darkness.  No one seemed home.   I suppose it’s time to get rid of them.  My neighbors had been quietly asking the same question.  “Why is she keeping those behemoths?  What an eyesore!”

So I thought, “It’s time to take them down!”  I made a mental note to call my neighbor, Jerry, the next day and have him push them over with his tractor and drag the hulking masses of decaying wood to the trash.  I would be rid of them!  My yard would be tidy once again.

But, the next day, while walking past one dead trunk (that’s all that’s left), I heard the rat-a-tat-tat of a Woodpecker.  Looking up I saw the shy creature as he slipped around to the backside out of view.  I suppose the Woodpeckers are still finding insects in the wood, but the trunks look so dead!  The Woodpeckers will find food in other trees! 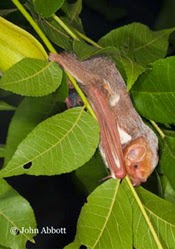 Last week, as I listened to Shari Blisset-Clark talk about Florida Forest Bats, she described how bats spend the day in hiding in hollow trees and craggy bark and I thought about the Pecan snags in my yard, ideal habitat for sleepy bats.  “Maybe”, I thought, “I should let them linger”.  The bark was perfect for slumbering creatures and the gaping hole in the trunk must already be home to multiple species of wildlife, even though I don’t see them.

Then today, as I tidied my yard, I heard the distinct call of the Red-shouldered Hawk.  Looking up I caught a glimpse of two hawks mating at the very top of one of the snags!  “Yeah”, I thought, “the snags are staying”!
---
posted by Laurie Sheldon
Devon Higgenbotham florida native trees Laurie Sheldon wildlife gardening

I used to worry about tidiness but have since given up and just started planting everywhere, leaving stick piles, saving dead trees, etc. The diversity of wildlife in my yard has increased exponentially.
March 10, 2015 at 9:55 PM

Unknown said…
I have left all of the dead pines from hurricanes Frances on and have pileated, red bellied and downy woodpeckers nesting in the holes they have made in the trunks and branches. Osprey, eagles, great horned and barred owls along with several hawk species like to roost on the branches. I even saw a red headed woodpecker briefly last year. I just love my dead trees and find that when they are ready to fall, it is usually after most of the wood has rotted and only a small section remains.
My trees died because they are in the nursery and couldn't handle the change in pH from the irrigation water. My other trees did fine, even after all the hurricane winds. Pine beetles do not kill the trees. Lawn mowers, watering and a change in drainage will.
It's nice to here that another person has learned to think outside the box.
Carl
March 17, 2015 at 8:57 PM