Beautiful Wakulla Springs sparkled in the summer sun. The first time I floated over the vent—185 feet below—made me dizzy as a child. The water was so clear it seemed that I might fall into the hole.

Wakulla Spring discharges about 250 million gallons per day, with a nearly constant water temperature of 69ºF. The Wakulla River gently carries the water to meld with the St. Marks River about nine miles away, and together they flow to Apalachee Bay on the Gulf of Mexico. Mastodon bones and a trove of ancient artifacts have been found in the spring. Movies were made—two Tarzan films, Airport 77, and The Creature from the Black Lagoon—because the clarity of the water allowed for stunning underwater scenes. But such is not the case today, even though Wakulla Springs is a protected state park.

When the water turned dark and the glass-bottomed boats could not run on many days, what had been long suspected turned out to be true. About 300 feet below the ground lays the Wakulla-Leon Sinks Cave system, the longest mapped underwater cave in the United States and the sixth largest in the world. But years of increasing stormwater runoff and effluent from septic tanks and sewage treatment from the surrounding area filtered into the system and ended up in Wakulla Springs. The river is now beset with Hydrilla, an aquatic invasive plant, and the piercing cry of the limpkin is no longer heard because apple snails have disappeared.

A year or so ago, Tallahassee Community College (TCC) announced the construction of an environmental training center in Wakulla County—the Wakulla Environmental Institute (WEI). Recently, they unveiled plans to sublease some 2000 acres of Wakulla Springs State Park for 50 years, build a campground near Cherokee Sink, and begin training the next generation of park managers. Conservationists rallied. A heavily attended public meeting was held on June 17. It was at best an acrimonious gathering that could have turned ugly. The majority of speakers favored the plan. Most environmentalists did not. 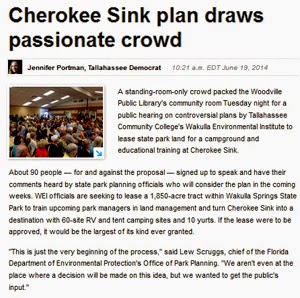 I attended the meeting along with two other Magnolia Chapter board members. I had not planned to speak, but I was urged to get up. By the time my turn came, many in the audience had left. I offered support of WEI, but said that the Magnolia Chapter staunchly opposed the campground, pointing out that two other campgrounds, one another state park, were nearby and could be utilized and students could be sent as interns to other state parks. I also noted that it would take more than a two-year Associates degree to train a park manager.

In the days afterward, I conferred with local, well-known Florida springs advocates, Jim Stevenson and Madeline Carr. Both welcomed and encouraged the support of the Magnolia Chapter, hoping that our members would write letters to officials and voice their concerns about the WEI proposal. I wrote a letter to the editor of the Tallahassee Democrat addressing my concerns, including the precedent this program might set for other Florida state parks. I sent copies to Governor Rick Scott, TCC President Jim Murdaugh, and Lewis Scruggs at DEP. None responded personally. On Sunday, July 20, the newspaper published letters opposing WEI's plan from Pam McVety, Ann Bidlingmaier, and myself. I soon received thanks from Jim, Ann, and Madeline, as well as several Magnolia Chapter members and others concerned about the issue.

On Friday, July 25, Bob Ballard, WEI director and former DEP deputy secretary, announced that the proposal had been withdrawn. Although Ballard advised that they might come back with a modified proposal, DEP press secretary Tiffany Cowie said, “Due to the withdrawal of the proposal, the department is no longer considering the project.”

Florida's environment has been under siege for decades, but lately the sale of some of the last surviving acres of south Florida's pine rocklands, unprecedented water withdrawal requests from the aquifer, rapidly growing populations of invasive plants and animals, the lack of proper best management practices addressing prescribed fire on state and federal public lands, and more assaults on this paradise are taking place at a quickening rate. Each chapter of the Florida Native Plant Society as well as state level board and committee members have a role, nay, an obligation to take a stand against these egregious violations of the  environment. The plants, animals, and ecosystems cannot cry out themselves. We cannot be silent. We must be their voice.

Paul Brewer said…
Thank you for helping to defeat this travesty.Remain vigilant however as money always will attempt to get the last word.
August 14, 2014 at 9:52 AM

Anonymous said…
Excellent example of what a few people with sound arguments can do. In northwest Florida we are working against having the military train 232 days per year in the Blackwater River State Forest and Tate's Hell State Forest with humvees and 2.5 ton trucks crossing streams in highly erosive areas and flying in equipment and troops in some of the largest and nosiest helicopters. They will also be doing survival training, eating what they can find, including songbirds. Please consider signing our petition https://www.change.org/petitions/governor-rick-scott-reject-the-use-of-blackwater-and-tate-s-hell-state-forests-for-land-maneuvers-and-other-ground-based-military-training
August 14, 2014 at 10:46 PM