I have two nephews - brothers, in fact - who turned 4 and 6 a few days apart in early January. Naturally, I gave them each birthday gifts. I generally ask my brother and sister-in-law what their kids could use before buying anything… but this time I did not. Instead, I took a cue from my oldest nephew, Kai, who, one year earlier, told me he had a butterfly garden at school, and asked if any of the plants I’d installed at his home would bring monarchs (to which the answer was, “no”). I replayed this conversation in my head, and, without hesitation, jumped in my car and headed toward Homestead.

I picked up two 3-gallon containers of milkweed, two large clay pots and saucers, some potting soil, and headed back home, where I repotted them and made a mess of my mother’s patio. Despite the fact that the boys were/are beginning readers, I carefully wrote the genus and specific epithet of each plant on the back side of its respective pot - just in case either one developed an early interest in binomial nomenclature. On the front side, I cut out their names in sheet foam, and attached one to the lip of each pot. I got them different types of milkweed too - one native, one non-native - just to avoid potential quarreling about which plant belonged to which boy. I removed all of the caterpillars before delivering the plants, as I feared that they would wander off of the plants and hide under the seat of my car, where they’d die of starvation.

I was very pleased with myself. There have been umpteen articles about recent a shortage of milkweed, so I felt like I was doing something good for both the monarchs and my nephews. When it came time to celebrate, I headed to my brother’s home for a pool party, and presented each boy with a plant. Then I gave them each an equal number of small, medium and large caterpillars to put on their plants. Suddenly things got exciting. The boys liked holding the caterpillars because they “tickled” and kept removing them from their milkweed(s). This worried me a little, but, then again, so does everything. When I left, the boys were beaming. I told them (and their parents) to keep the plants in the sun, give them water when they dried out, showed them how/where to cut them back once they were leafless, and pointed out several  monarch eggs so that they'd know what to look for before tossing anything.

Two days later, we had a freak cold-snap. I panicked and sent my sister-in-law a text message to bring the plants inside, which she did. The next morning she told me that all of the caterpillars had died. Oh no! I asked if they were still attached to the plants (they were), and told her not to jump to any conclusions. I put my scientist hat on, and guessed that they were just conserving energy. Sure enough, only one had died, and the rest were fine (phew!). When the cold had passed, the plants went back out into the sunshine.

Then another cold-snap came. This time, all of the caterpillars went A.W.O.L., save for the two largest. I told my sister-in-law that if she saw either one hanging in a "J" it meant that they would be pupating soon. Within two days, they had two bright green, gold-rimmed chrysalises. Each of the boys claimed and named one for his own... Kai called his "Coo Coo Brain" and Bodhi's was "Chrysallisie". Curious about what happened to the other caterpillars, I went over to their home to investigate. Sure enough, nary a creepy-crawly could be found on either plant, although there were a couple of eggs. As disappointing as that was, it was overshadowed by the presence of the two dangling beauties, which, incidentally, had been formed on leaves and stems that seemed ready to fall off. The plants were inside their Florida room at this point, where the two foot drop to the concrete floor would have put an end to the metamorphosis taking place inside of "Coo Coo Brain" and "Chrysallisse". I brought over a plastic container with airholes that was deep enough to allow the butterfly in each chrysalis to emerge, hang onto its former home, and smooth its wings, and told the adults to tape the silky/webby pad of each chrysalis to the inside top of the container (actually, I drew a diagram too, but it was no artistic masterpiece). I warned them not to freak out when the chrysalis started looking dark - that it was actually not getting darker, but, conversely, it was becoming more transparent, and the darkness they'd be seeing would actually be the butterfly within. 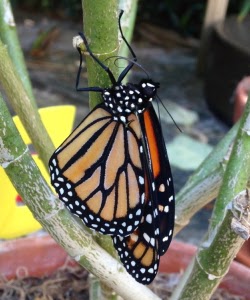 Each step in the process was more exciting than the next. The boys and their parents were both actively engaged and fascinated. One at a time, a few days apart, the butterflies emerged. My brother and sister-in-law applauded me for giving my nephews, "the best gift ever," but I played it down and said it was a, "gift from Mother Nature," and that I was just the delivery boy. I'd raised monarchs many years earlier, and knew how incredible the experience was (and is); I was just happy that the kids remained interested throughout.

A few days later, one of the butterflies died. I'm not quite sure why, but I suppose at this point it's moot. Fortunately, my brother and sister-in-law took the time to explain to their children that death is inherent to life, and that, by raising caterpillars and butterflies at home, they significantly increased the chances that the larvae and insects would reach adulthood.

The boys buried the butterfly together, and the eldest of the two wrote a note (shown below) and stuck it by the graveside with a toothpick. It was the saddest, sweetest thing I'd ever seen. "Well, they still have the plants," I thought to myself, knowing that eventually they'd have more butterflies.

With some help from their mom, the boys presented a joint "show and tell" about their caterpillars and butterflies at school a few days later. I hope that they encouraged/inspired some of their classmates to ask their own parents for milkweed. Sharing one's knowledge of and enthusiasm for the natural world is truly a gift that never stops giving.
butterfly gardening education Laurie Sheldon milkweed

FlowerLady Lorraine said…
That was great and how exciting for the boys. They learned so much from these two plants, from birth to death and the beauty of living.

Thank you for sharing this story.

Chris Parisi said…
Laurie,
The milkweed with the yellow flowers is Mexican Milkweed. A. curvassica, not A.tuberosa. I hope he plant wasnt labelled as such when you purchased it. We are having a time with people trying to pass off non natives.
March 18, 2014 at 10:53 AM

Unknown said…
It WAS labelled as such. Steve Woodmansee pointed out to me that it was likely non-native after I posted the piece, as apparently A. tuberosa is very difficult to grow in south Florida.
March 18, 2014 at 11:16 AM