On August 11, 2013, the F.N.P.S. Board of Directors, along with Rebecca Staton-Reinstein and Ellen Bristol of the Bristol Strategy Group, attended a two day retreat at Jonathan Dickinson State Park. A typical B.O.D. meeting was held first thing Saturday morning. After that, we were all subject to Rebecca and Ellen's poking and prodding. These two women were hired to help F.N.P.S. actualize its potential. It was the second Strategic Planning Event they were facilitators for. I was not at the first one (held in February 2013), but Ginny Stibolt was, and she wrote the following blog about it: 2013 FNPS Board Retreat. They felt that, given the way that the organization currently operates, it has maxed out on its potential for expansion and development. Further, they suggested that the only way for us to continue to function and grow would be to make some significant changes to our current system of governance, and soon... otherwise we were headed for a short walk off an even shorter plank. Yikes!

Backing Up
Don't freak out if none of this makes any sense to you. I probably should have started this piece more chronologically to explain what's going on. Rewind to the year Reagan was elected, gas cost $1.20/gallon, people everywhere were asking "who shot J.R.?" and the Florida Native Plant Society was born. It was 1980. At the time, there were 20 Board Members and 150 members. Today, there are over 3,000 members and something like 60 Board Members. Although the Board has grown in size and brain power, let's just say that, as in many other things, bigger isn't always better. Currently, the Board of Directors consists of an Executive Committee (EXCOMM) and Representatives from each of the organization's 37 chapters. It has become evident that the Chapter Reps (and their respecitve chapters) are not really benefitting from attending Board Meetings, which are largely focused on EXCOMM business. When push comes to shove, what the Representatives really need is to learn about other chapters' successes and failures regarding everything from events (like plant sales) to field trips, and speakers, and to subsequently share that wisdom at their own chapter meetings.

Check out the video above (from Cool Hand Luke) for a statement about the fundamental problem that the F.N.P.S. faces.

Moving Forward
We've targeted communication as our achilles heel. Great. Now what? If we look at this issue as a byproduct of how the organization is structured, perhaps it would be wise to check out how other states' Native Plant Societies are set up - particularly those states in which communication among chapters is not problematic. A bit of research reveals that California's Native Plant Society (the largest in the country in terms of finance and membership) is the ONLY one that isn't operating under the same model we are. They have a streamlined Board of Directors and a separate Council of Chapters for their Chapter Reps. There are two seats on the Board for Council Representatives, which serve as liaisons between the two bodies. That setup is working for them, and if it's good enough for the left coast, then gosh darnit it's good enough for us!

What's that? You are going out of your gourd because we can't just breach our own bylaws? Just sit down and breathe. First of all, if it wasn't legal to change things up a bit, no organization would ever evolve into something bigger and better than its former self... and as scientists, you DO believe in evolution, right? So here's a little Darwin for ya' - natural selection dictates that the species that roll with the punches and make positive changes to their traits (reflecting their changing environments) are going to be the species that stick around and multiply, right? So let's not allow F.N.P.S. to go the way of the 8-track! Current bylaws can be circumnavigated by restructuring "ad hoc" (that's like "beta version" for you tech geeks out there). Once we figure out what works, then we'll adjust the bylaws accordingly. Makes sense, right?

Defining the Council of Chapters
With the Council idea in mind, we got into the business of specifics: purpose, goals, etc. Everyone in attendance was put into a group of about 8 people to do this. Each group brainstormed up a list, then pared down their lists by voting. Eventually all of the groups' pared down lists were combined, and the room voted all together. I think it's fair to say that it was not the most fun thing ever, but we got 'er done. Here's what we came up with...


THEN WE GOT TO BREAK FOR THE DAY - YAHOO!

Before heading out to fill our bellies, Anne Cox lead us on a  hike through Kitching Creek Nature Trail, which winds through flatwoods along a tributary of the Loxahatchee River. The canopy was largely slash pine, with wiregrass, gallberry, saw palmetto, and wax myrtle in the understory. It was a terrific way to unwind after a day full of list-making.

Day 2
We continued to flesh out details regarding the organization's restructuring on the second day of the retreat. First we determined what the revamped EXCOMM would look like, including a little shuffling around of the current Director positions.


Then we listed two sets of "initiatives":

Organizational Initiatives
Finance
Governance and Board development
Conference
Fund development
Marketing and outreach (including communication to members, recruitment, and bringing in funds) 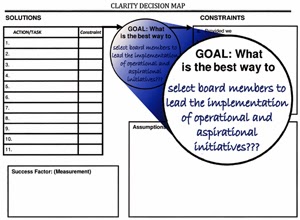 After that, we got back into groups of 8 to determine what the best way to select Board members to lead the implementation of those "initiatives." We started with a "Clarity Decision Map" (which, oddly enough, I felt was very confusing), then came up with various constraints and assumptions (below, L) and success factors and solutions (below, R) as per the map. 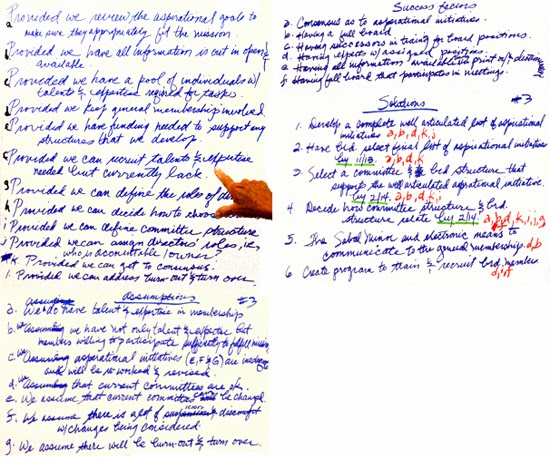 Agendas
Last, but not least, we worked out what the future scheduling of the Council of Chapters and B.O.D. might look like.

Council of Chapters
Julie Becker stepped up and took on the responsibility of bringing the Council of Chapters to life (like Dr. Frankenstein, but much more attractive, positive and not scary)! Go Julie! It was proposed that the Council would hold monthly meetings for one year - primarily electronic (via phone, skype, etc). She planned to organize the first Council meeting/orientation prior to December 15, 2013.

Board of Directors
Board meetings were suggested to be held monthly for approximately one year (also primarily electronic) and to last about 90 minutes to 2 hours. Three live meetings would take place: (1) at the conference, (2) an annual planning weekend, and (3) one other (to be determined). Content of meetings would revolve around strategic planning of the following "initiatives": 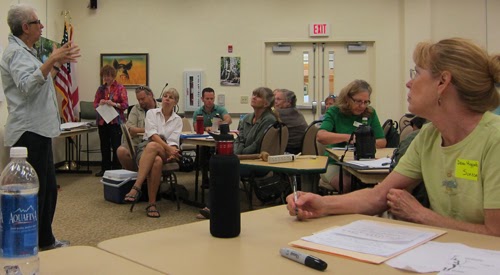 Summing it Up
It was a very productive and exhausting weekend. Hopefully, the ideas discussed will come to fruition. If nothing else, know that your current Chapter Reps (now Council Members), Executive Committee Members, and Members-at-Large are doing everything they can to make F.N.P.S. a fabulous organization, and one who you can be proud to be a part of. Go team!
---
Photos and graphics by Laurie Sheldon
Video c/o YouTube
FNPS Board of Directors Laurie Sheldon

Cammie Donaldson said…
Go Laurie! What a great post about this meeting. Love your graphics. Let's hope we have the fortitude to make these changes!
November 13, 2013 at 7:19 PM