The Importance of Native Plants, Part 1 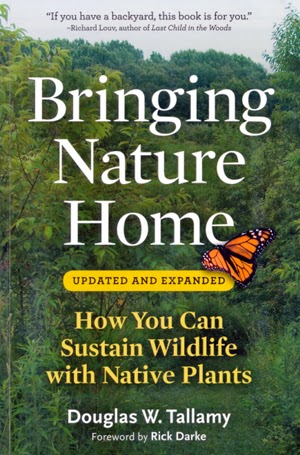 The Need to Plant Natives in (sub)Urban Landscapes
As development and subsequent habitat destruction accelerate, there are increasing pressures on wildlife populations. But there is an important and simple step toward reversing this alarming trend: Everyone with access to a patch of earth can make a significant contribution toward sustaining biodiversity. There is an unbreakable link between native plant species and native wildlife - native insects cannot, or will not, eat non-native plants. When native plants disappear, so do native insects; subsequently, the food source for birds and other animals is dramatically reduced. In many parts of the United States, habitat destruction has been so extensive that local wildlife populations have entered a state of crisis and may be headed toward extinction. Bringing Nature Home, by Douglas W. Tallamy, Ph.D., has sparked a national conversation about the link between healthy local ecosystems and human well-being. By acting on his practical recommendations, which are highlighted below, we can all make a difference.

Gardening For Life
Chances are, you have never thought of your yard as a wildlife preserve that represents the last chance we have for sustaining plants and animals that were once common throughout Florida. But that is exactly the role our suburban landscapes are now playing and will play even more in the near future.

If this is news to you, it’s not your fault. We were taught from childhood that yards and gardens are for lawns and beauty; places to express our artistic talents. And, whether we like it or not, the way we landscape our properties is interpreted by our neighbors as a statement of our wealth and social status. No one taught us about the importance of maintaining native plants for native pollinators. We didn't learn that habitat destruction forces the diverse populations of plants and animals that evolved in Florida to depend more and more on human-dominated landscapes for their continued existence. We have always thought that these other species were happy somewhere out there “in nature” (e.g. in local "woods" or perhaps in our state and national parks). We have heard nothing about the rate at which species disappear from our neighborhoods, towns, counties, and states. Even worse, we have never been taught how critical it is to our own well-being to promote biodiversity in our own backyards.

We Have Taken It All
The population of Florida (now over 19 million people) continues to grow while our natural resources and drinking water availability have shrunk to all-time lows. Our population explosion has gone hand-in-hand with urban sprawl and hundreds of miles of new roadways that bisect native habitats and large mammal migratory routes (black bear, panther, etc.). The effect on natural ecosystems and biodiversity has been devastating. Migratory birds that have stopped in the same areas for centuries are increasingly finding it difficult to find their native plant food sources. Somewhere along the way we also decided to remove most of the native plant food sources for birds and other wildlife on our properties into huge expanses of lawn.

In the U.S., so far we have planted over 62,500 sq miles (45.6 million acres), in lawn. Each weekend we mow an area 8 times the size of New Jersey and then congratulate ourselves on a job well done. And it’s not like the remaining “woods” and “open spaces” are pristine. Nearly all are second-growth forests, thoroughly invaded by non-native, invasive plants like Mexican petunia, camphor trees, coral ardisia and air potato. Over 400 species of invasive plants have invaded hundreds of millions of acres across Florida killing native trees and plants – and displacing the food and nesting sources that our birds, butterflies, pollinators and other wildlife need for their survival. Sadly, because of political pressure from the ornamental plant industry, many invasive plants are legal to sell. Most citizens are completely unaware of this, operating under the reasonable assumption that a menacing species of plant would not be commercially available. They are not told that "Florida 'Friendly'" is a sneaky way to describe a non-native species, or that by purchasing invasive plants they are contributing to the destruction of native habitats. How? Birds will eat from an invasive plant in your yard if there is no other food around. In turn, they fly away and drop the seeds in nearby natural areas, complete with "fertilizer." Seed can also be dispersed by the wind and/or spread by landscape maintenance equipment. Other plants can spread by aggressive rhizomes.

To nature lovers, the following statistics will be horrifying. Dr. Tallamy stresses them in his book so that we can clearly understand the challenge before us. We have turned 54% of the lower 48 states into a matrix of cities, suburbs and tiny fragmented habitats that cannot sustain themselves because they are cut off from their natural hydrology and connection to adjacent habitats. We have turned another 41% more into various forms of agriculture. That’s right: we humans have taken 95% of nature and made it unnatural.  But does this matter? Are there consequences to turning so much land into the park-like settings humans enjoy? Absolutely - for biodiversity, wildlife food sources and for us. Our fellow creatures need food and shelter to survive and reproduce and in too many places we have eliminated both. In Florida, 112 plant and animal species are rare, threatened, or endangered and a myriad have already disappeared entirely. Many of those that haven’t suffered local extinction are now too rare to perform their role in their ecosystems. These can be considered functionally extinct. The song birds that brighten spring mornings have been in decline since the 1960s, having lost 40% of their numbers so far. Birds that breed in meadows are in even more trouble. Some species have declined by 65% to 82% in total numbers, and are completely absent from many areas that used to support healthy populations.

Why Biodiversity Matters
For most of us, hearing such numbers triggers a passing sadness; but few people feel personally threatened by the loss of biodiversity. It IS, in fact, something that should cause every one of us reason to be alarmed. Here is why: a diverse network of native plants, animals, and insect species evolve together in ecosystems - they interact and depend upon one another specifically for what each offers, such as food, shelter, oxygen, and soil enrichment. We humans have inserted themselves into those ecosystems. We benefit from the oxygen that plants create (and the carbon they sequester), the water they filter, and their protection from extreme weather. We eat the fruits that were made possible by insect pollinators, who themselves are a food source for animals.
Humans cannot behave as though they are the most important species on this planet because their lives depend on the services provided by OTHER SPECIES. We encourage our own demise every time we force a species to extinction. Maintaining the species in each ecosystem is necessary to the preservation of the intricate web of life that sustains all living things. E. O. Wilson (known as the "father of biodiversity") said, "It is reckless to suppose that biodiversity can be diminished indefinitely without threatening humanity itself."

Bringing Nature Home
Because our yards and gardens are part of the terrestrial ecosystems that sustain humans and the life around us, it is essential that we keep them in working order. Tallamy discusses the important ecological roles of the plants in our landscapes, emphasizes the benefits of designing gardens with those roles in mind, and explores the consequences of failing to do so. Gardening in this crowded world carries both moral and ecological responsibilities.