Thank you to everyone who took the time to apply for a Landscape Award this year. By going native, we ALL win. Congratulations to the following award recipients:

Page Field Aviation Terminal, Lee County
FNPS Landscape Award of Merit
Designed to blend with the Southwest Florida environment, this new aviation terminal opened for business in August of 2011. Airports typically do not fit in with a community setting so an important part of this project was design it to blend in with the urban setting and enhance the aesthetics of the airfield, while still enabling safety and aviation protocol. Choosing the landscape plant materials for an airport is challenging because the plants and trees should not attract birds or other wildlife that could interfere with aircraft. This is the opposite of why we typically plant native landscapes. The challenge was to choose native palms and trees, shrubs and perennials that not only added to the beauty of the site, but also don’t attract birds or insects. Additionally, Lee County regulations require that 50% of the plants be native to Southwest Florida. This project far exceeded the required percentage and contained 84% native species. The design incorporated 12 different native tree species and 14 different native shrubs as part of two wet retention ponds and an entrance drive.  This is a unique and exemplary aviation landscape in Florida. 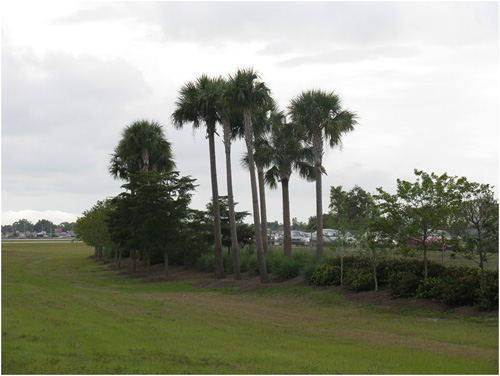 Cowie Residence, Brevard County
F.N.P.S. Landscape Award of Merit
Located six miles west of the Indian River Lagoon, this beautifully detailed landscape was once a monoculture of non-native, chemically dependent plants. Today these award winners have achieved their goal of having a landscape that attracts wildlife, creates privacy, adds to the ecology of the community and one that stands out with curb appeal.
Their landscape contains live oak, Sabal palmetto, beautyberry, wild coffee, Fakahatchee grass, sunshine mimosa, pineland heliotrope, Verbena tampensis, Senna ligustrina, and firebush. Their native plants have provided resources for pollinators and food, habitat and shelter for birds and butterflies.
The site has been featured in the Florida Association of Native Nurseries (F.A.N.N.) catalog, used as a demonstration garden by the Conradina chapter of F.N.P.S., included in a documentary film by the Brevard Museum of Arts and Sciences, and appeared as the centerfold in the Guide for Real Florida Gardeners. 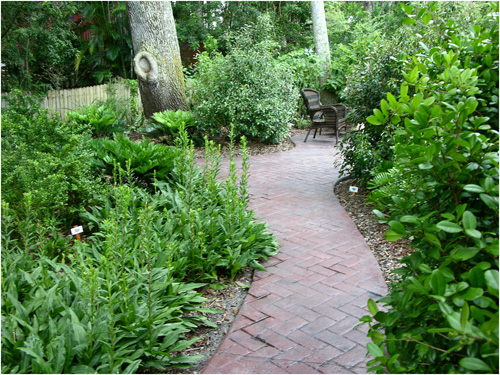 Beaupre-Heitzman Residence, Pinellas County
F.N.P.S. Landscape Award of Excellence
As a typical suburban subdivision property, the existing landscape comprised a monoculture of lawn sod and non-native foundation shrubs. After the removal of the non-natives, the owners' objectives were to create a screen for some “outdoor” rooms, ameliorate noise from the adjacent street and effectively layer tall to low plantings to create habitat for a variety of species.
After several years of planning and planting, the landscape now consists of many native species including sabal palms, sea grapes, saw palmetto, gumbo limbo, red cedar and slash pine. Understory plantings contain myrsine, marlberry, snowberry, beach sunflower, varnishleaf, wild coffee, porter plant and beautyberry.
This home landscape has been featured in the Tampa Bay Times and on local landscape tours. Further, it was awarded "Home of the Year" from the City of St Petersburg. 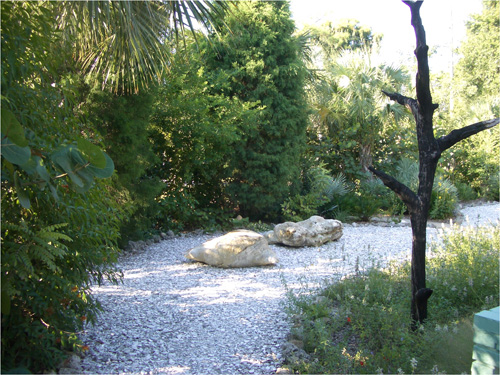 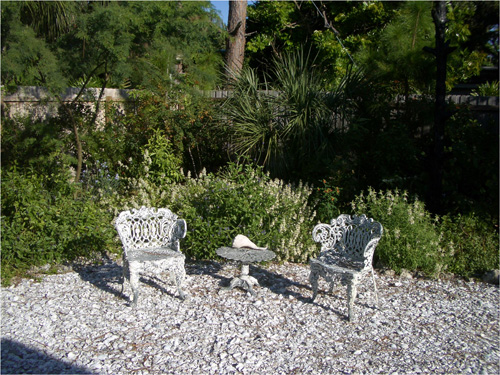 Royal Grove, Residence of David & Louise King, Dade County
FNPS Landscape Award of Excellence
Royal Grove is located at the edge of Everglades National Park not far from Taylor Slough where the owners are Park Naturalists. The land had been previously farmed in row crops and was bare soil when the property was purchased. The design objective was not to restore any one plant community but, rather, to establish an arboretum of native plants that would evolve into a natural landscape and attract/feed a diversity of wildlife. Plantings include wild coffee, coontie, live oaks, satinleafs, cherry trees, persimmon, royal palms and crabwood trees.
The first materials planted were the large tree species followed by understory trees and shrubs, then oak hammocks. A pond area was created and trails were established over time as the vegetation grew. Eventually, elevated boardwalks were built through the north hammock and epiphyte species were added.
This property contains seven species of native trees that have been recognized as "National Champions" on the American Forests’ List of Big Trees. These include Florida licaria, pale lidflower, cinnecord, Florida nectandra, boxleaf stopper, Florida fiddlewood, and myrtle-of-the-river. Their wingleaf soapberry is the Florida Champion. 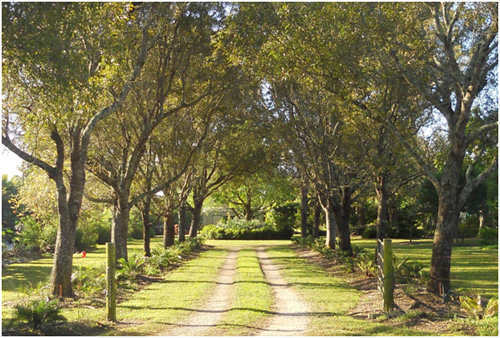 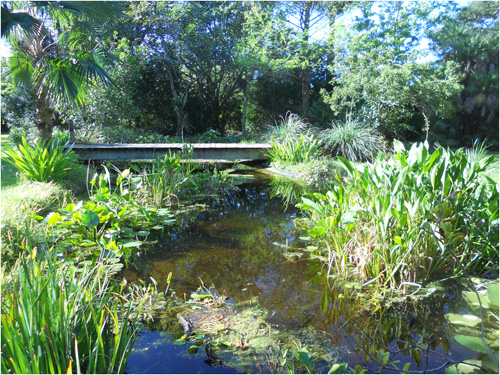