The Ixia Chapter has taken several field trips to GTMNERR over the past few years. Why do we keep going back? Because it rocks! The Reserve is literally brimming with native flora and fauna (both resident and migratory, like our conference attendees) - the species list at the end of this blog is a testament to that. In short, GTMNERR is not a "been there, done that" kind of place.

What's in a Name?
GTMNERR is sort of a binomial acronym, in the most non-botanical way, though. The first part, GTM is a tribute to the three rivers that make up the site's estuary (Guana, Tolomato, and Matanzas). The Guana River was named by the Spanish explorers, the Tolomato after an Indian village in Darien Georgia, and Matanzas - also named by the Spanish - translates as massacre. The "massacre" it refers to took place near the river's inlet, where the Spanish forces executed several hundred shipwrecked Huguenots from Fort Caroline (a French colony located near the mouth of the St. Johns River). 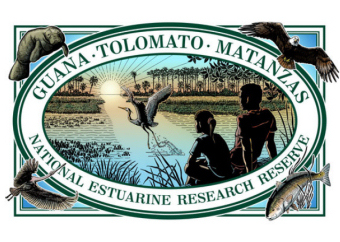 The second part, NERR, refers to the site's designation by NOAA and the State of Florida as a National Estuarine Research Reserve. As a Research Reserve, GTMNERR is responsible for promoting coastal research, stewardship and environmental education programs. There are only 28 sites in the NERR System. GTMNERR is dedicated to the conservation of biodiversity and cultural resources. Extending over 73,000 acres of land, it contains thirteen management areas, handled cooperatively by seven different agencies.

What's in it for you?
The field trip will begin at GTMNERR's 21,000 square foot Environmental Education Center, which opened in 2005. It contains unique exhibits detailing Florida's natural history, hands-on displays, aquariums, videos, and a Nature Store that's definitely worth checking out. Emily Montgomery (your field trip leader, member of the Sea Oats chapter and GTMNERR employee) will take you on a hike. The Reserve contains a wide variety of habitat types, including saltmarsh and mangrove estuaries, freshwater marsh, maritime hammock, coastal scrub, and pine flatwoods. Conference field trippers will wind through the last three of these on the site's extensive network of nature trails.

Post-hike opportunities
After the field trip, there will still be plenty of on-site exploring for interested attendees. Those seeking a place to unwind can take off their shoes and stroll along the site's pristine beaches - the coastal waters there are important calving grounds for the endangered Northern right whale.

Hike leave you feeling like a wilderness man/woman? Try catching your own dinner at the Guana River Dam, where the crabbing is good, redfish are jumping, and anglers are welcome until 11 pm.

Historic St. Augustine, just 13 miles south of GTMNERR, is another great option. The trip is worth taking for the drive alone, which runs on A1A's scenic and historic coastal byway, and presents lush vistas of the ocean and dunes.

What's my point?
Those who sign up for this field trip will not be disappointed. Period. End of story. What are you waiting for?

Note: this blog is about Sunday field trip S to GTMNERR. There is a day-long field trip on Thursday that includes the aforementioned AND a kayaking trip on the Guana River salt marshes... if kayaking "floats your boat," so to speak, check out field trip C.
------
The following flora and fauna lists represent a small portion of the species seen on site by our chapter members: