2425 County Rd. 13 South, Elkton, FL 32033. This is where my chapter (Ixia) was meeting for a Saturday morning field trip, lead by Mike Adams. Adams is the owner of Adamscience (an environmental resource management company) and purveyor of "one of the finest examples of sustainable multiple-use forest management in Florida." I plugged the address into the GPS on my cellphone and hit the road. Little did I know just how out-of-the way this place was. To describe it as being just north of Hastings (potato capital of Florida) and due east of Bostwick (the blueberry pancake hot-spot) might give you a clue. I lost my cell signal a few minutes after exiting I-95 (uh-oh), but after a good bit of guessing, and a few turns determined by a coin toss, I finally arrived at my destination. 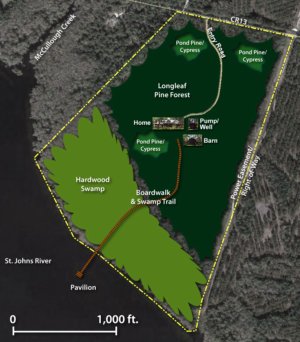 With about a dozen or so Ixians standing in the port-cochere of Adams' lovely home, he began our tour. After purchasing the 94-acre piece of land from Rayonier in 1989, he enlisted the aid of his father and set about building his family a home there, starting with a pump, then a house, and eventually a barn. Even today, the closest grocery, bank, and hardware store are about 10 miles away. He named the site Saturiwa, an homage to the native Timucua Chief whose subgroup of the tribe extended from the mouth of the St. Johns to downtown Jacksonville, and along the Atlantic coast from St. Augustine north to the St. Marys River. The property (shown at right) graduates from pine flatwoods to hardwood swamp, kisses 1/2 mile of shoreline on the St. Johns, is punctuated by cypress domes, and hums with wildlife. It is nothing short of lovely.

Adams gave us a bit of background information, then we began walking. He told us that the property was once a pristine longleaf pine forest, and in fact, 90 million acres of longleaf pine once stretched from southwest Virginia to eastern Texas. Demand for timber prompted the harvesting of millions of those acres. Trees that were not harvested were often used as a source of turpentine. Saturiwa was once a turpentine camp. Adams' plan was, and is, to replace the Pinus elliotti (slash pines) that surrounded us with the majestic Pinus palustris (longleaf pines) that historically populated the area. One of his earliest efforts to achieve this end was subsidized by a grant from US Fish and Wildlife that provided him with the means to plant over 3,000 of such pines. Shortly after they were installed, feral hogs ripped through the site like young, engaged women at a Filene's basement wedding dress sale...  and it was back to the drawing board. I asked if he did any prescribed burning, to which he responded with an emphatic "yes," although drought over the last three years has prohibited him from doing so. 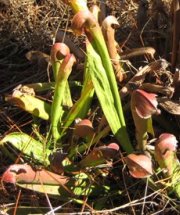 After telling us this story I began pointing in the air and saying, "ooh, ooh, ooh,"  in a very Arnold Horseshack way, so Adams turned and asked what I had seen. "An eagle, I think, although its feathers were mottled." "Probably an immature eagle," he replied, without seeming even remotely disturbed with me for interrupting, "there are several nests around here." Exciting! I liked him already. We moved on along the trail, past several large clumps of Hypericum suffruiticosum (pineland St. John's-wort), Sarracenia minor (hooded pitcher-plant, photo at right), and Osmunda (cinnamon) fern (all of which are natives, f.y.i.). 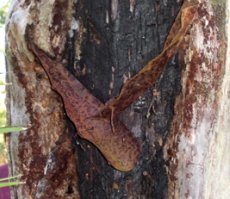 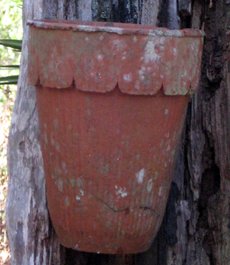 Adams stopped at a pine that had beeen gouged out, and had two pieces of metal wedged into its trunk. On the opposite side of the same tree, a similar chunk had been carved out of the bark, with a terracotta-type pot that seemed to float in the middle of the injury. We learned that this is how turpentine was collected, and this tree had been double-tapped. What I mistook for a pot was called a "herty cup," a vessel for collecting the sticky substance as it flowed from the tree. Apparently, Herty is the man who invented the cup. Cups with a scalloped lip (shown on left) are described as "cat-faced." The whole process would eventually kill the tree. As longleaf pines may take up to 150 years to mature, and can live to be 500 years old, you can imagine how devastating this was... especially because there's no fast track to bouncing back.

We reached the hardwood swamp and the dense tree canopy filtered out the blinding sunshine, which gave the scene an ethereal glow. As hardwood swamps are subject to fluctuating water levels, and occasionally home to water moccassin (one of which we walked by as it showed us its pearly whites), he had a boardwalk built over it which extended out into the St. Johns river. "What good is it to live on this fabulous river if there's no place to do a cannonball jump from?" Adams said, his son behind him with a mile-wide grin. Among the natives we spotted in the swamp were titi (Cyrilla racemiflora), red maple (Acer rubrum), giant leather fern (Acrostichum danaeifolium), and an enormous overturned live oak (Quercus virginiana), which I was convinced was mooning me.

The canopy opened to a clear sky, with Symphyotrichum carolinianum (climbing aster) as a sort of fencepost. I ceeded the front-of-the-line position on our march toward a sizeable covered dock when I felt the whir of the only cloud around - a swarm of gnats (or something gnat-like) - close to the water's edge. Shortly after we all reached the dock, my immature eagle made an encore appearance, then an osprey swooped in close to us to literally "grab" a bite to eat. We learned that ospreys have specialized spicules (barbs) on their talons (feet) to help them hold onto slippery fish, and that they usually position the fish they catch head-first, as they are more aerodynamic to fly with like that. Who knew?!

Tommy, Mike's son, had been quiet until then. He pulled a cage out of the water which he used for crabbing, and, after a bit of reluctance, with his father's encouragement, he removed a few crabs and showed us how to identify the males from the females while his father played Vanna White, holding its pincers. It's all about the grooves on the underside of their shells; males have a distinctly phallic shape, and females have a pyramidal shape. Neat!

We wrapped the trip up, and walked back to Adams' home, which is a museum in and of itself. He has all sorts of skulls and stuffed animals and an enormous, in-tact (though inactive) hornet nest. Some of us stayed and ate lunch on the large, wrap-around porch, while others headed back north to our respective houses. Naturally, I got lost again... probably because I had so many new things to think about. It occurred to me, as I wound my way around those county roads, that Mike Adams and his family were living the textbook that Doug Tallamy wrote... They were Bringing Nature Home.

All photos and graphics by Laurie Sheldon
---

Adams was named Timber Grower of the Year in 2005 by the St. Johns County Timber Growers' Association. Four years later,  he, his wife Carole and son Tommy were honored as the Forest Steward Landowners of the Year. The following year,  Adams received the Agricultural-Environmental Leadership Award, which was presented to him by (then) Commissioner of Agriculture Charles H. Bronson. To see a video and to learn more: http://www.florida-agriculture.com/news/agen_saturiwa.htm

Going to the 2013 FNPS Conference in Jacksonville? Lucky for all of us, Adams has agreed to run a guided field trip of Saturiwa. Check out Field Trip W for details.
Laurie Sheldon longleaf pine Native Plant Conference restoration

Anonymous said…
Wonderful post, definitely worth a trip to the FNPS conference.
January 14, 2013 at 9:03 PM

Hobo Botanist said…
Great article, how lucky you guys were to have Adams "pitch" in and help lead a walk to a special place!
January 16, 2013 at 9:20 AM

Florida Native Plant Society said…
Thanks! He is as much a part of what makes Saturiwa special as the site itself.
January 16, 2013 at 2:53 PM