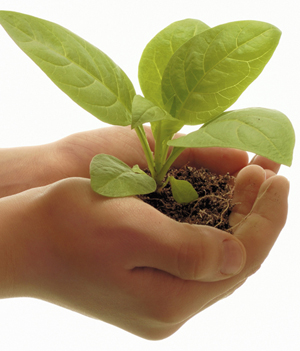 Valentine’s Day is rapidly approaching. While some people may consider it to be a trivial or sappy holiday, I believe that it’s the perfect opportunity to tell your loved ones that they are an important part of your life.
Although it’s fairly standard to give your sweetheart a bouquet of red roses or a fancy box of chocolate, the truth remains that neither one has a chance of lasting into March (unless your love is allergic to chocolate). Surely, you want to get the most bang for your buck, so to speak. Why not consider giving something that stands the test of time, and can be a continued reminder of your enduring affection? No - I'm not talking about jewelry or a Keurig! Think GREEN. Bring that special someone a native plant. It’s the gift that says, “I’m in it for the long haul,” and “I’m too thoughtful to give you something I grabbed at a 24-hour drug store.” Aside from making his/her heart beat a little faster, you’ll be keeping Florida’s air cleaner and your bodies trimmer.

Plants to woo your valentine with in north Florida 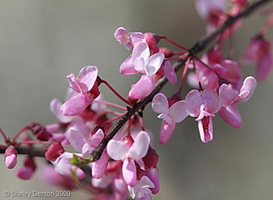 I'm rather partial to Cercis canadensis, or Eastern Redbud. This deciduous native will delight your special someone in late February when its bare stems and branches explode in a rose pink cloak of blooms. After flowering, Redbud unfurls its leaves, which look like wide, papery hearts because of their oval shape and cordate bases. It is hardy from Michigan south to central Florida, where it appreciates being planted in a shady spot - particularly during summer (don’t we all?) Cercis canadensis makes an excellent understory or specimen tree, which grows to about 25’ high, and is typically taller than it is wide. It is not picky about soil pH, and is tolerant of both drought and short-term inundation. As if that wasn’t enough to sell you on this lovely member of the Fabaceae family (no relation to the Kardashians - thank goodness), its leaves turn a golden yellow for additional fall color. 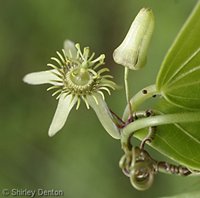 Passiflora suberosa, or Corkystem Passion-Vine, would make a spectacular gift in the lower half of the state. In addition to its habit of blooming year-round, it is a larval host for longwinged butterflies (namely, the julia, gulf fritillary, and zebra longwing), and its flowers are followed by dark purple berries that birds are quite fond of. Its flowers have an unusual, almost extra-terrestrial or sea anemone look that is impossible to forget (but sort of hard to describe). It will tolerate full sun or shade, and, as long as the soil stays somewhere between moist and not-quite-dry, it will bring both you and your valentine many years of enjoyment.
Florida native passionvines Florida native plant Laurie Sheldon

Hobo Botanist said…
Absolutely, why purchase a bouquet of flowers whose beauty if fleeting, and likely covered in pesticides, when one can share and nurture a plant together! (Delete "How to Lose a Guy in 10 days" movie image of the "death of the love fern" scene)
February 13, 2012 at 11:33 AM

Florida Native Plant Society said…
Wish I knew the film. No doubt it's always better to get a gift whose stems won't clog up with bacteria in t minus two seconds...
February 16, 2012 at 10:42 PM