The Shipyards is in downtown Jacksonville and is situated on the St. Johns River. It was a working shipyard from the 1850’s until 1992. After its closure, two different companies purchased the land with the idea of development, only to be defeated by the economy. It was then claimed by the City of Jacksonville. The land sat idle for years, used for downtown event over-flow parking, surrounded by a chain link fence and full of weeds and debris. Just by chance last year, I saw an article in the local newspaper quoting the mayor, who wanted to tear down the fence and spread grass seed in the area. “Oh no, I thought, not grass seed!” I immediately pictured a forty acre site full of native plants, butterflies, bees, birds, paths, benches, and smiling people. I got in touch with my key contact in the mayor’s office and explained my idea. I also said our chapter would find funding, and make this happen. The proposal was actually well received!

Nothing ever happens quickly in government.
Months went by, but I kept popping up with my idea. Finally, two of us from the Ixia Chapter had a key meeting and we were granted two acres for planting. At the same time, the Florida Wildflower Foundation announced the availability of $500 grants for wildflower seed purchase to county governments that adopted a wildflower resolution, supporting the planting of wildflowers in the area. It certainly appeared planting two acres of wildflowers would be the easiest, least expensive, and best way to go for the Shipyards site. The City of Jacksonville Economic Development Commission (JEDC) would write the grant. The Ixia Chapter would handle the planting, and any other costs, which appeared minimal.

Right away, we had a soil pH test at the Duval County Extension Office. The pH tested very high, well over 8.0. This immediately limited us to only the wildflowers that could handle high pH, such as Dune Sunflower. Additionally, we discovered the soil was highly compacted. We decided to explore the purchase of good topsoil for the site, and needed 1,600 cubic yards to cover the area with four to six inches. The cost for this proved to be prohibitive, so I net worked, and immediately found a private donor of all the soil. The pH of this soil tested perfectly! We were in business.

Meanwhile, the City of Jacksonville City Council adopted the resolution required by the Florida Wildflower Foundation to apply for the grant. All was good. Except, the resolution was worded incorrectly and was not acceptable to the foundation. Back to the City Council. The resolution was re-worded correctly, and passed again. Now, on to the grant writing with a staff member from the JEDC. Whew! Everything was done just in time for the deadline of the grant submission. The City was awarded the grant! Great news, except we were required to purchase actual wildflower plants with the funding, not seeds, because of the current soil problems, which did not take into account the soil that would be donated.

Getting a Topsoil Donation
I thought I could now concentrate on finding someone to donate moving all the topsoil to the Shipyards site, another small detail. Also, I was informed by the City staff that we had to provide our own irrigation lines and pay for the water. It was also clear that $500 worth of wildflower plants would not cover two acres, so we had to purchase additional plants or seeds. “No problem,” I thought, always the optimist, “I can get donations for all of this.”

Just when I thought the path was clear, I was summoned to a meeting with key members of the JEDC. I was informed the Shipyards site was heavily contaminated, and great care had to be used in disturbing the site. I was also informed the donated topsoil had to be tested for contaminates and could not be moved to the Shipyards until the test was completed and tested clean. This test proved to be one of the most difficult hurdles because of a cost of over $1,000. It took several months, but the test was finally donated by a company that specializes in such testing. It was now clear that nothing else could be done until the soil test was complete because we could not afford to purchase soil, and believed it would be impossible to find another donation of the needed amount.

Time was Running out for the Wildflower Grant
Weeks went by, and finally, the test results came in. Unbelievably, the results indicated two prohibited contaminates. We could not move this soil to the site. We were also staring at a rapidly closing deadline to use the $500 grant. We put our heads together with our staff contact at the JEDC, and contacted the Florida Wildflower Foundation. We asked if they would approve another site, and approve the purchase of wildflower seeds instead of plants. We were approved for both! Our contact at the JEDC came up with a wonderful site at the intersection of Riverside Avenue and Forest, which has become the main through fare from that area to downtown Jacksonville. Over 10,000 cars pass by daily. The site is very large, but part of it is privately owned, and slated for development. It had also recently been seeded with grass. We were allowed to plant the ¾ acre owned by the City of Jacksonville around a newly installed retention pond. 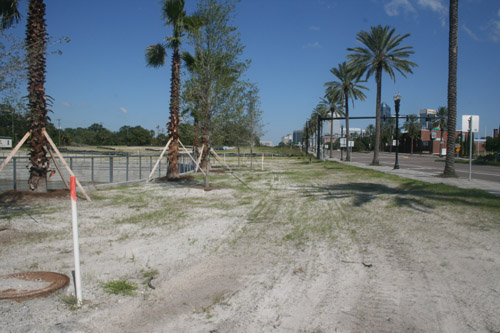 ﻿﻿
﻿These two "before" photos show two views of the site. The retention pond is behind the fence--on the left in the top photo and on the right in the bottom photo. You can also see the traffic signs for Rt 95 access in the bottom photo: this means a lot of people will see the wildflowers. 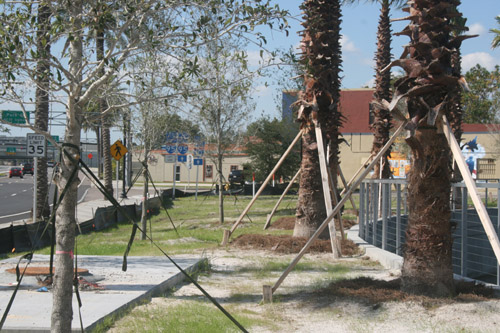 ﻿We sprayed the ¾ acre with glyphosate (Roundup) to kill the sprouting grass, and then waited ten days to sow the wildflower seeds. We also found we had a high pH in the new location, and were advised to use Dune sunflower and Blanket flower as primary plants. In addition to the $500 of seeds purchased by the grant, our chapter spent $291 on more seeds. We were also advised to use a roller to level the area and press the seeds into the ground, and spread pine straw over the area with 50% coverage. The area required 100 bales of pine straw. All was accomplished with volunteer labor from our chapter in a matter of three and a half hours on November 13, 2011. The ¾ acre site seemed to grow larger by the hour as we worked.
﻿﻿ 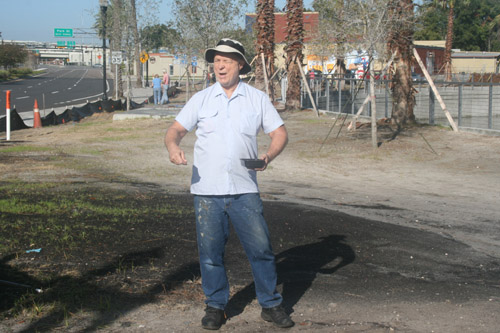 Sowing ten pounds of seeds takes many hands. The mixture of seed was designed for the soil's acidity and for maximum impact next to the road.﻿
﻿ 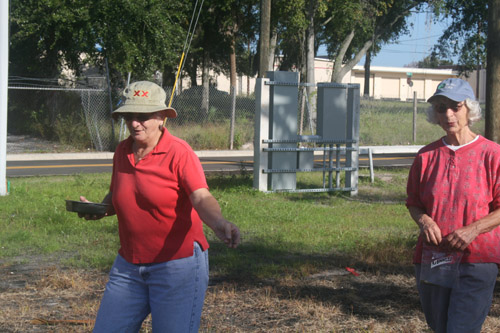 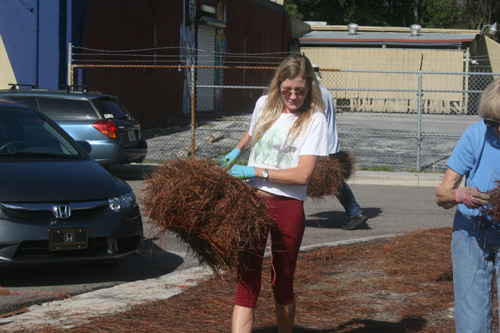 The pine straw bales were brought in and then spread evenly over the entire seeded area.﻿ 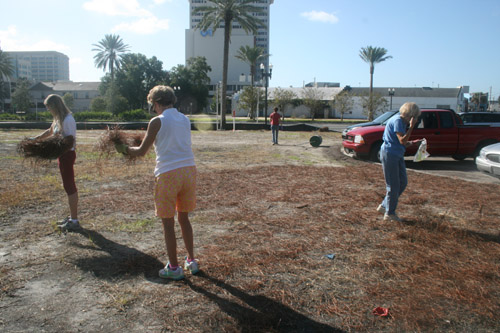 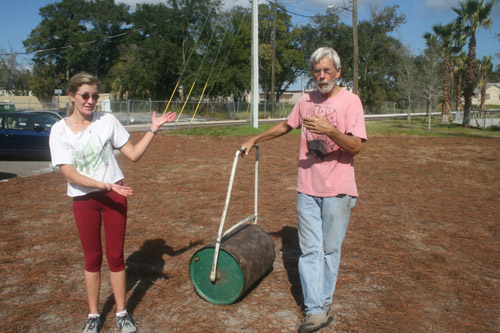 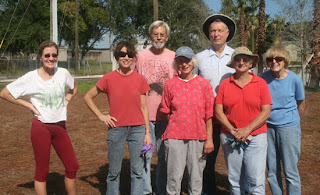 Was all this worth the effort? Tune in next spring for another report.
Editor's note: The Florida Native Plant Society's 2013 conference will be located in Jacksonville. One of the field trips will include this project. So come see for yourself how *things* worked out.﻿
environmental activism florida native widflowers Florida Wildflower Foundation

Florida Native Plant Society said…
Planting native wildflowers where they will be seen by thousands of people everyday certainly promotes the FNPS goals “Preservation, Conservation, and Restoration of the Native Plants and Native Plant Communities of Florida.”

An outstanding effort by Jacksonville's Ixia chapter! We’d love to hear about your chapter’s projects and activities. Send an email to fnps.online@gmail.com
December 11, 2011 at 7:57 AM