October 30, 2011
October began with great weather for a field trip to Longleaf Pine Preserve.  This is a Volusia County Land Acquisition and Management property and the trip was an event of that department's outreach program.

Thirty people joined Volusia County naturalist Bonnie Cary for an eco-buggy ride into the preserve.  This included 12 members of the Pawpaw Chapter of FNPS, many of which helped answer native plant and other questions from the public participants.


Longleaf Pine Preserve  is one of the many properties in the Volusia Conservation corridor that extends through rural parts of the county mostly between the more populated western towns - including Deltona, Orange City and Deland – and the developed coastal towns that include New Smyrna Beach, Port Orange, Daytona Beach and Ormond Beach.  This preserve has been acquired in several purchases made from 2005 trough 2007 through the Volusia Forever program - a county version of the state's Florida Forever - with help from the St. Johns River Water Management District, and now totals about 12,000 acres.  All of these programs are being significantly effected by the current economic and political climate.  Land Acquisition and Management is currently being merged with the county's Environmental program.

Natural communities found here include both mesic and wet flatwoods, cypress domes and strands and scrub.

Two trails provide access by foot, bicycle and horseback.  A six-mile loop trail extends into the preserve from the west entrance on Hwy 44.  The 11 mile long blue trail provides a route through the preserve from the west entrance to the east entrance on Pioneer Trail, where this trip originated.  Primitive camping is allowed in a designated campsite along the trails.
The eco-buggy provides opportunities for more of the public to experience the natural areas, and these events are almost always filled up.  This is a covered trailer with four bench seats running the  length of the buggy, and is usually pulled behind a pick-up truck or a tractor.

After some brief stops to point out some of the grasses, our first exploratory stop was where some small ponds were beside the road, one containing many bladderworts.  Here we examined one of the plants.  Pawpaw member Dot Backes had done a report on carnivorous plants in her Florida Master Naturalist wetlands class, and she explained how they feed on the small organisms in the water.  Another carniverous plant in the low areas near the ponds was sundew.

The next stop exposed the group to some native Liatris and the skipper butterflies that were feeding on them.  Pawpaw members Mike and Gail Duggins identified one of them as Delaware skipper.  Another butterfly that I think was a Baracoa skipper was also visiting the Liatris.  Then Bonnie Cary pointed out the invasive cockleburr (Xanthium strumarium) that came in with a load of fill dirt.

At the Dahoon holly, someone new to to the state mentioned that they did not think of holly as a Florida plant.  As people wandered along the dirt road in small groups, we heard the excited call “Pine Lily!”, the first of several seen that day, and one of the highlights.

At our last stop we saw the third carniverous plant of the day, hooded pitcherplant (Sarracenia minor).  Bonnie Cary opened up the specialized leaf of one of the pitchers to show the inside and there was a surprise creature – some kind of grub – among the digesting insects.

Even though this was not a Pawpaw Chapter field trip, the participation of so many of our members provided an excellent opportunity to interact with people interested to learn more about the plants and ecosystems of our state.  The chapter has participated for a number of years in Volusia County outreach program field trips to various conservation lands, especially the fall wildflower events.


Paul Rebmann is a Florida Master Naturalist, nature photographer, longtime FNPS & Audubon member, and FNPS Webmaster, with a day job as a network administrator. You can see more of his beautiful photos, and learn lots about them, too, on his website above.   He is also exhibiting at the Halifax Art Festival on November 5/6 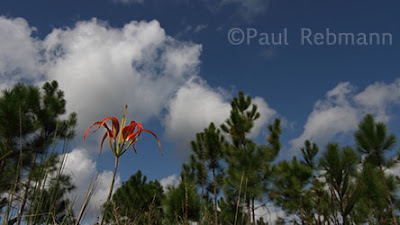 Ginny Stibolt said…
Paul,
Great post and love the video. I think this gives people an idea about what fun FNPS fieldtrips can be. Thanks!
October 31, 2011 at 7:17 AM