Keyhole Garden In - Lawn Out

September 29, 2011
"I didn't want grass anymore, and I didn't want a yard that looked just like everybody else's," says Diane Neill, explaining how she came to be the proud owner of this beautiful garden.  "I was interested in conserving water, tired of mowing and feeding the turfgrass, and wanted to get more enjoyment out of my outside space."


Diane knew nothing about native plants, or even about garden design; but serendipitously, her son, Brandon, who just graduated with a major in Sustainable Living, came home last spring from Iowa with lots of ideas and some awe-inspiring garden design books. He had been learning  about using planting beds, and suggested those as good alternative. Diane was intrigued with the pictures, and excited about combining flowers with edibles and herbs, but had some reservations: what would the neighbors think? Would the HOA allow it? She definitely wanted something that looked attractive and wouldn't upset the neighbors.
As they poured over the books, Diane was especially fascinated by the concept of a "keyhole garden" that they discovered in Gaia's Garden: A Guide to Home-Scale Permaculture by Toby Hemenway. A keyhole garden, explains Diane, is a place you can walk into and kneel down to reach in to all parts of the planting area. As they thought more about it, this concept seemed to fulfill all their needs, and they charged ahead full steam to make it happen.

Diane had gotten just a bit of information about native plants while attending a farmers' market. She spoke with folks there who recommended natives as being easy keepers. Diane took home some brochures and began a search on the Internet to learn more. Her son drew up a sketch using the dimensions of their yard, and Diane, a graphic arts designer herself, went to town with details. She refined and elaborated the design, which had the dual purpose of making it a work of art, and also giving her the data needed to estimate costs.
Now please imagine a full orchestra, as in the movies, with a thundering chorus of doom-denoting music........because when Diane got serious and asked for quotes from the "landscape guys," gloom and doom was what she got. She was told that natives were "not pretty," and was categorically discouraged from using them. However, even though Diane had never created a garden herself, she came from a family of farmers back in Iowa, where her mother had always had a vegetable garden.  So now that she had a vision, Diane knew what felt right!
She had the good fortune at this point to learn about Indian Trails Native Nursery in Lake Worth. She took her book and her drawing out there, to Jane Thompson, who immediately knew it would not only work, but it would indeed be "pretty." Jane gave her choices of a variety of plants for the differing heights needed to implement her plan, and things were really rolling.

Diane was anxious to make use of her son's fleeting presence to get some of the structural work on the garden done, and she describes the next phase as pretty hectic. They had to decide on the type of rocks that would be in the pathways, not to mention the job of retrieving them from the source and getting them laid down. They stayed on task, though, and finally the big day came. Jane drove up to their house and delivered 900 plants, which they spent the next four days installing!
"The neighbors were lining up in the cul-de-sac to see what was going on!" says Diane. But when it was all over, the compliments just came rolling in: "It looks beautiful!" was the common refrain. Shortly after the initial install, Diane added a bench so that she could sit right in the garden and enjoy it up close. She laughs as she says that one day she went out and a stranger was sitting on it! 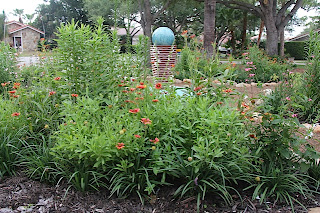 Diane has loved learning about the multitude of beautiful native flowers, and teaching others about them, too, along with the added benefits that natives bring. Those of you who already have native gardens will not be surprised to hear this, but Diane has been thrilled to discover that clouds of butterflies are now a part of her new landscape. 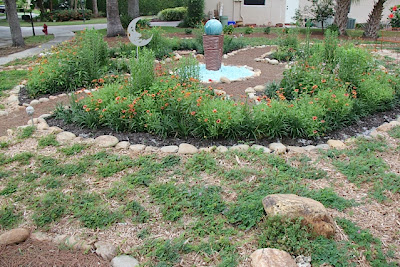 What a great success story!
Send us yours!

Yogaccino (Jessalyn Kennedy) said…
Beautiful and unique! I love that Diane had a vision and found a way to make it happen despite the gloom and doomers!
September 30, 2011 at 8:04 AM

Iggy F. said…
Yes despite the gloom and doomers! She stepped up and showed herself and the neighbors. Great Job! Diane, Son and Jane.
September 30, 2011 at 2:30 PM

Nanette said…
You have a wonderful eye for design. I applaud you -- my husband and i completely transformed our yard last year to a totally grass-free landscape too, and we couldn't be happier with the results. Bravo to you!
October 7, 2011 at 12:53 PM