June 12, 2011
A personal interview in which clues to Steve Woodmansee's indisputable prowess in Plant ID and indefatigable energy for FNPS are revealed!


Sue: Steve, when you became Vice President of Finance for the Florida Native Plant Society in 2008,  your bio came out in the Sabal Minor, so we know about your formal achievements, but I am thinking that today you could give us a bit more of a insider's view of our new FNPS President?
Steve: Sure, Sue, what would you like to know?

Sue: Well, let's go back a ways: how long have you lived in Florida? Can you tell us how you came to be interested on native plants in the first place?

Steve: I've lived all my life in the Miami area. I did spend a long summer near Hood River, Oregon. That was enough cold and elevation for me!

Sue: I hear you, Steve. We were out there last year in July hiking in the snow!

Steve: I give my parents, FNPS members since 2002, Jo and Woody Woodmansee, credit for sparking my first interest in native plants. They taught me to love nature at an early age, mostly through action.  It seemed every long weekend we’d camp somewhere in South Florida, and I was able to explore much of wild Florida with them, my siblings, or on my own.  They also taught me the value of hard work, to never be complacent, and to never be bored. My mother used to tell me “boredom is a sign of stupidity”.

Sue:  What was it that got you started with the Florida Native Plant Society?

Steve: When I started working at IRC (The Institute for Regional Conservation), I became aware of FNPS because of their affiliation there as a not-for-profit member.  One of the goals of IRC was/is Institution Building, and at that time Keith Bradley, who later became Dade Chapter president, was on the chapter and FNPS boards.  I liked the vibe of the organization, and became a member myself in 1998.  The Dade Chapter also hosted the 2000 conference, and I volunteered as a field trip leader.  I became a chapter board member in 2002 and served till 2008. I was chapter president (and the chapter representative) 2003-2006, and I’ve been active ever since.

Sue: That's an understatement! Did your first working experiences contribute to your plant knowledge base? Were there any mentors for you in FNPS?

Steve:  While going to school at Univ. of Miami, I became a naturalist for the Miami-Dade County Department of Parks and Recreation, and I worked at two local parks, the Deering Estate at Cutler Park, and Bill Sadowski Park.  As a naturalist I was a jack-of-all-trades; I led tours through the natural areas and historical buildings, canoe trips, sold tickets, cleaned bathrooms, helped with book keeping, and was a camp counselor in the summer.  After Hurricane Andrew, the park closed, and in 1994 I got a job as a research assistant at Fairchild Tropical Botanic Garden, where I conducted vegetation monitoring and rare plant mapping activities.  In 1997, I was hired at IRC, and worked there for 11 years.  I am still a Research Associate at IRC, and assist where I can.

I started my own business, Pro Native Consulting, a little over three years ago.  I have to say that my experience at IRC honed my botanic ability in addition to teaching me about not-for-profit organization and development, and I credit that to George Gann in addition to my own observations.   I’d list my additional FNPS mentors as founding FNPS members Don and Joyce Gann, and almost founding member Patty Phares.  Don and Joyce were always there to answer questions, and Patty is an institution all on her own.  I will say though, that I blame myself for any mistakes that I made during my leadership positions

Sue: What kind of customers are you serving in Pro Native? Have you seen changes in your customer base? Would you say from your experience in Pro Native that there is a greater appreciation for natives now than when you first started out?

Steve: I am again a Jack-of-all-trades running my own business.  The bulk of my work comes from the environmental consulting, where I am currently working as a lead scientist in the vegetation monitoring of the Hole-in-the-Donut Restoration area in Everglades National Park (along with Floravista, FNPS member and former conservation chair, Suzanne Kennedy’s group).  I also assist governments and not-for-profits in similar projects consisting of vegetation monitoring, rare plant mapping, and exotic plant mapping.  I even assisted one researcher in China, where I was hired to collect seed from populations of the native Jack-in-the-bush (Chromolaena odorata), a noxious weed in China.  I am also  a certified Nursery Plant broker and a professor at Miami Dade College’s Landscape and Technology Center.  All those years volunteering at the chapter’s plant sales really inspired me to try it out on my own.  As a plant broker, I work closely with a wholesaler friend, John Lawson of Silent Native Nursery (also an FNPS member), I am always bringing him seed, and testing out new native plants for cultivation.

I also sell retail at plant shows, and once a month at Silent Native Nursery.  At Miami Dade College, I teach courses in Landscape Plant Identification, Landscape Construction, and Exotic Pest Plant Identification.  I couldn’t pass up the opportunity to influence the landscapers, horticulturalists, and hobbyists in using native plants.  Ironically, since I don’t have a Masters Degree, I am “unqualified” to teach native plant identification courses.  So, my customer base is broad, and I have both new and loyal customers.  I do think there is a growing appreciation for natives, although the current trend holds for “butterfly gardens," (click to see Steve's posts!) which are very much in vogue.  During my sales events, I always schlep along some FNPS membership forms and information pamphlets and dutifully hand them out promoting FNPS and its mission.  While I’ll always be a botanist at heart, I feel that both teaching and sales have really furthered my personal development and outreach skills, and learning something new keeps me on my toes!

Sue: Where do you like to go to botanise/relax/enjoy the outdoors?

Steve: Well, when one makes his hobby his life, one must be careful not to become “burned out."  I no longer go into the woods and “enjoy” the woods, I am constantly identifying things, but it is still fun for me.  I am trying to learn more about landscaping and gardening with natives. I focus mostly on restoration and habitat re-creation techniques, so I do spend a lot of time in my yard.  That all being said, any opportunity to pull off the side of the road and go botanizing, I still take up.  I am also trying to pass on the legacy my folks brought to me to my own family.


﻿
﻿
It is hard to say what my favorite place is, as I have been botanizing all over South and Central Florida, and each place has its own value.  I will always hold a soft spot for the Big Cypress National Preserve. I spent the better part of three years researching there while at IRC, and we made many great discoveries.  It has over 1,100 native plant species, over one third of all native plants in Florida, and more native plants than Everglades National Park!

Sue: Thanks, Steve for this inside look! I can see that  FNPS is really going to benefit from your unique and extensive experience.

Steve: I truly am honored to hold the esteemed position of President for the Florida Native Plant Society.  The vision is pretty much established, however implementing it will be the big challenge. I believe there is a leverage point in accomplishing our mission.  It will take all of us to help, and I plan on unveiling more about this in the upcoming Sabal Minor issue.

Sue: I agree with you about the need to leverage what we're all doing. I'm looking forward to reading your article. Good things are coming!


Steve chairs, and sponsors through his business, the Native Plant Workshop.
For more info see: http://nativeplantworkshop.ning.com/
That's Steve in 2002, standing at back in green shirt 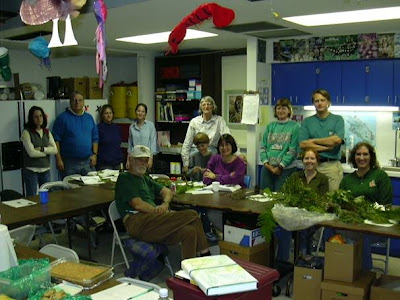