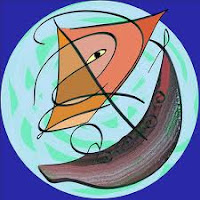 Well shiver me timbers, mates, our boat has been rocked! Doubters and naysayers have been out there in media land with some ideas that we just might have something to say about. Or about which we might have something to say. You can choose.
A book entitled Plant Driven Design, by Scott and Lauren Springer Ogden has recently been reviewed by one of our friends at the Garden Rant. A lovely book, with some lovely ideas in it.  I read the book when it first came out, and the review had me breaking out in sweat for a second time.
I quote:
Coming in for even more bashing are native plant purists, and their claims that native plants grow better than nonnatives, to which the Ogdens reply simply (and accurately) that "Native plants cannot be declared inherently better, either practically or aesthetically."
OK. First of all, how many times have you read right here that the plant must be fitted correctly to the place.  You can't grow sea oats in a swamp. We admit it. Practicality is linked with location. There are places where a bougainvillea will grow better than a jacquemontia. We will hark back to exactly what it means to "grow better" later. Let's hear some more:
We're seeing more pushback against the native plants-only approach these days from various quarters (especially the horticulture professors) and most gardeners agree with the Ogdens that plant purists can be off-putting with their piety and self-righteousness - (like purists of  any kind, I suppose). But these author-scholars enrich the conversation by invoking pre-history - before the last Ice Age and going forward- to put plant evolution into perspective for us, making a compelling case for the inclusive approach to plants that's used by the vast majority of gardeners.
Whoa, whoa, whoa back, little doggies! I will concur with anyone who prefers not to associate with people who affect a pious, self-righteous attitude, but please, that is a personality type, not a class of gardeners.
The argument being referred to next, that plants and ecosystems have constantly been evolving and always will, is true. What the author/scholars referred to in the review fail to acknowledge is that the evolutionary process that produced our present natural world took place over thousands of years, not the two weeks it takes now to completely bulldoze a place and stick new plants in. Yes, new plants did take over in places where they adapted competitive advantages, and other species were eliminated.  But these events took place over time spans long enough to allow the living things that depended on each other to also adapt. And that is the key to the difference between former change, and change as it happens quickly today because it affects biodiversity, and the loss of it.
When ecosystems are damaged far enough that the components of it's food web are altered, extinction begins. Both plant and animal species become permanently lost. This is happening at an astonishing and very well-documented rate already in our world.
So does biodiversity matter? Who cares if x, y, or z becomes extinct?
It does matter. In a world of shrinking resources, - and they must shrink in the face of increasing population, even if you don't agree they are shrinking due to pollution and over usage - we cut out an opportunity with every single thing we loose.
Maybe we will need the genetic component of some desert grasses to enable us to grow oats with scarce water. Maybe the genetic hardiness of some birds, or their ability to forage for themselves, will be necessary to raise birds for food. The salt ion exchange that enables the connective tissue of  sea cucumbers to change from rigid to limp is being studied right now for bio-medical uses - another example proving that scientists are far more often copying what they find in nature than inventing new ideas. New ways of studying things are available to us; but we will never even know what might be contributed as we cross plants and animals off the list here on earth.
And we haven't even entered into the argument about the aesthetics of loosing beautiful birds, butterflies and animals that we will not have the opportunity to see except in pictures if the native plants that sustain them, or their prey are gone.
When you talk about what grows "better," you do not have an argument at all if you leave biodiversity out of the discussion.
Furthermore:
Not shying away from the hottest topic of all - invasive plants - the authors note that invasiveness is highly local, and anyway, "Any plant, even an invading one ought not to be damned simply because of its origins." In highly disturbed sites, it's these weeds that act fast to cover soil "thereby initiating the process of biological recovery."
Fine. I won't damn any plant because of its origins. Now, let's talk about casuarinas, water hyacinths, air potato, torpedo grass, lygodium...... and while we're talking about those, let's think about what happens when nonnatives take over a disturbed site. It doesn't take a doctoral degree to understand that a native was prevented from doing the same thing. We have many natives that are known as pioneer species, evolved to fill in the gaps quickly. But unlike the nonnatives, they are prepared to support the local flora and fauna who need them. Duh.
For further reading:
Why Your Wildlife Garden Matters
Native Plants Help
We will obviously have to leave aesthetics for another day, but till then, remember: natives add life to your landscape.
sue dingwell
biodiversity florida native plants invasives

Silverfish Closet said…
Then there is the New York times editorial I recently forwarded to my sister (http://www.nytimes.com/2011/04/03/opinion/03Raffles.html?src=tptw), though to their credit it comes on the heels of a beautiful native plant slideshow they put out entitled "When New York City Bloomed"
April 4, 2011 at 8:24 PM

Florida Native Plant Society said…
Yes, I saw that. My points still stand. Take the zebra mussel; yes they filter water, but that heavy filtering also means they consume energy and nutrients needed by larval fish. I have found no evidence that supports the presence of zebra mussels giving rise to greater fish populations, indeed the opposite is more likely. They are also killing off the native mussels - less biodiversity - and causing five billion dollars worth of damage per year to clogged industrial plants, water works, and boat motors. Evidence is mounting that they emit a blue-green algae toxic to fish and people.
The use nonnative ice plant used to hold soil in California is just like the use of nonnatives to quickly fill in empty gaps. Yes, they do it, but there are natives better suited. Thanks for your interest - good to keep the conversation going!
April 4, 2011 at 9:10 PM

Desert Dweller said…
Bravo - while I like some of the Springer-Ogden book, they need to escape the dated cottage garden theme a bit and look to the patterns and processes in nature. I hear such folks constantly dismiss the value of native plants, and it is a shame. We have an "award winning designer, author, activist...", who is even known as a native plant proponent, say how "a native plant is a plant that is native somewhere". Cute, but dismissive.

Local native plants (even ecoregional natives) from a similar site, especially low water-use species, have so much value in so many ways for a variety of design styles in ornamental landscapes.

Keep up the good work, and the native plant bashers need to be more BALANCED; the native plant nazis are a personality type and not a catch-all as you state; those they like to deride seem to be less harsh than they are!
April 5, 2011 at 11:43 AM