Lignum vitae: the Wood of Life 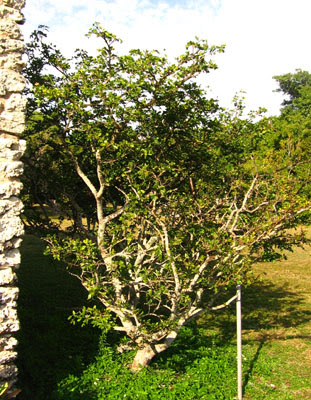 The lgnum vitae (Gualacum sanctum). This must be a special tree with two Latin names. Actually, this IS a special tree for many reasons. It grows slowly--about an inch per year. The wood is so dense that it sinks in water. Its wood was highly prized for propellers and judges' gavels. Because it's resinous, the wood was also good for ball bearings and hinges--they are self lubricating. The resin has medicinal properties: it reduces inflammation, suppresses coughs, and was used to treat syphilis. Because of all its uses, it was widely harvested and because of its extremely slow growth, the tree is rare in most of the Florida Keys, its native habitat.
Here's more information and photos of the tree on Floridata.com. It has amazingly blue flowers.
But on Lignumvitae Key most of the population was spared from the harvest because it was privately held and accessible only by boat. This key is now a state park. It's open on Thursday through Sunday and tours of the house and trails are only on Friday through Sunday.  It's on the bay side of Islamorada at mile marker 78.5.  Here's the park's website. It's worth the trip, but bring your insect repellent.
﻿
﻿ 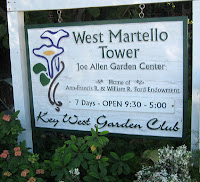 Another more accessible site to see a lignum vitae up close is the Key West Garden Club garden at Martello Tower. www.keywestgardenclub.com

This 20' tall lignum vitae tree in the garden withstood hurricane Wilma's flooding where the bottom portion of the garden was under saltwater for several days. They estimate that it's more than 80 years old. Let's see, if you do the math, 20 x 12 = 240 inches tall. Gosh, this tree is probably a lot older than 80; if you consider that it's growing in a civil war fort, it's probably 150 years old.
This chunk of lignum vitae wood is about a foot tall and 10" x 6" across. It weighs 82 pounds!

Lignum vitae, just one of many wonders in Florida.

Quick quiz: What other state park is also named after a native plant?