February 24, 2011
Because I'd donated 50% of my book's royalties to the Nature Conservancy of Florida, Erica La Spada, a donor coordinator there, invited my husband and me to a private guided tour of the Disney Wilderness Preserve south of Orlando in Kissimmee. Wow! We were impressed with the size (12,000 acres) and with what the Conservancy has done to restore the property from ranchland back to its original status according to the records from the first Spanish missionaries. 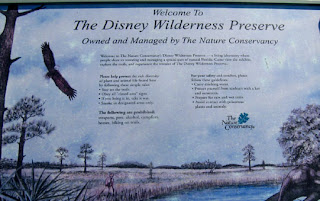 This site began as a mitigation site to offset the land that was used in the making and expansion of Disney World. Disney has provided an endowment that has allowed the Conservancy to do most of the restoration, and some of the wildlife monitoring. While Disney gave the first 8,000 + acres. An additional 3000 acres came from the Greater Orlando Aviation Authority and a few more small parcels from other companies (Universal is actually one of them.) to make up our current 11.866 acres.

To us, this refurbished "Real Florida" is far more interesting than the totally artificial environment in the theme parks. Here's a link to The Nature Conservancy's website for this property. 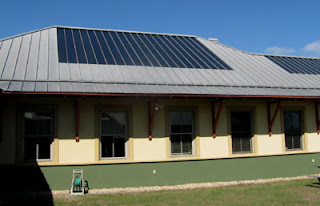 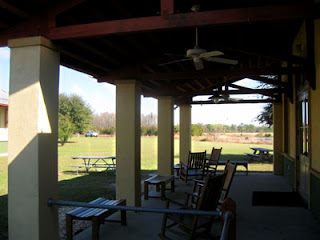 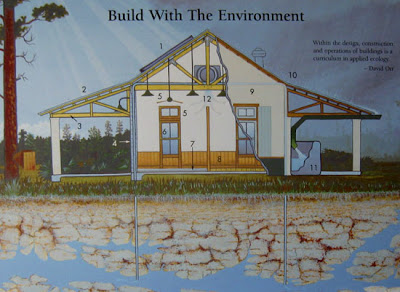 The Conservancy's buildings are built with many green features such as: geo-thermal cooling as the pipes go into the cool water of the aquifer; solar panels; wide porches to keep the sun out; water collection from the roofs to use for irrigation and flushing toilets; and ceiling fans throughout.

For the general public there are several hiking trails, but we traveled in a hybrid 4-wheel drive truck around to areas not on the regular tour stops. Great fun... 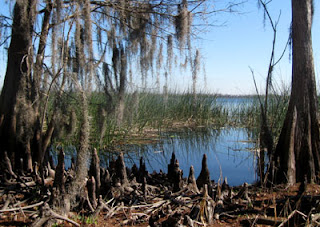 We started our tour at Lake Russell, one of the last undeveloped lakes in Florida. This area is part of the headwaters for The Everglades, which is one of the the reasons the Conservancy was so interested in managing this site. 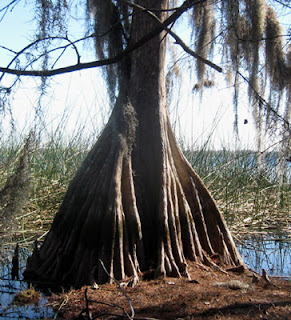 Then we went to an area mostly open, but with some shrubby growth. This is where the scrub jays live. There are several groups of jays in the park and Dan, our driver was certain that he could entice some jays out into the open. He made some noises and walked out to a feeding platform and pretended to put some food out. We waited for several minutes and he was about to give up on them when suddenly a group of six jays flitted over to see what we were doing. 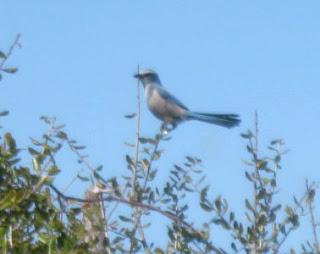 Scrub jays, endemic to Florida, are an endangered species. The are threatened primarily because of loss of habitat--wild grassy areas with frequent fires to keep the forests open and grassy. The jays do not adapt to other types of ecosystems. They really need the fire-managed scrub habitat, which is one of the aims of the Conservancy in managing this property - to cater to the scrub jays needs. Here's more information about the jays on Wikipedia and in this interesting Cornell Lab of Ornithology article: Scrubland Survivors.

One of the plants in the scrub jays favorite habitats is the running oak (Quercus pumila) that spreads across the ground as a groundcover. It is the very un-oak-like, green groundcover between the grasses and palmettos in the photo below. 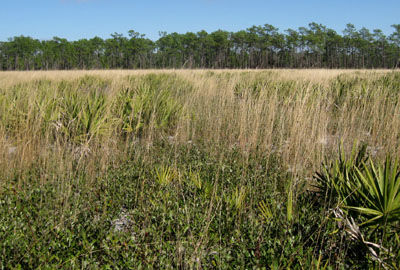 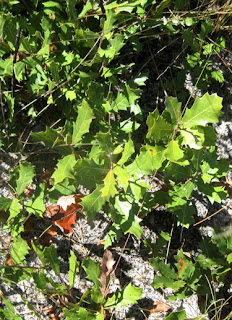 But when you look at it close up, it does look like a very small oak. It produces a lot of small acorns, which the jays favor.

Note also in these photos, that the soil is loose sand. This is another one of the requirements for the jays' habitats so they can bury the acorns and other nuts. 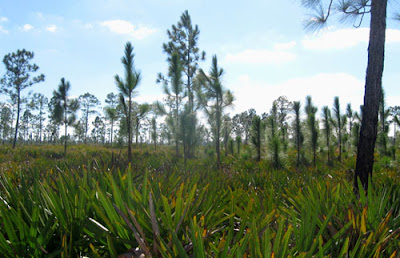 The Conservancy has replaced the non-native bahia pasture grass with native wiregrass and broomsedge. They've been burning the land on a regular basis, have encouraged the native longleaf pines (Pinus palustris), and have drilled some holes in the more mature trees and inserted artificial cavities within the trees (they look like little birdhouses, but they’re completely contained within the pine) to attract the red cockaded woodpeckers. To get started they physically relocated the woodpeckers to the trees (most from Apalachicola National Forest). They hope that in the future they will come on their own (like a single visitor that flew in from Avon Park), but it probably won’t happen for a while yet. They will be relocating more birds this year. For more information on these endangered birds, see this link. 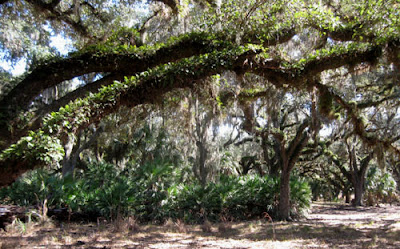 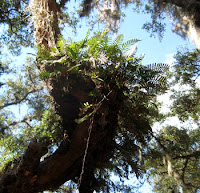 Most of the time the resurrection ferns are dried and brown, but because of recent rain storms the ferns were bright green. These ferns and the Spanish moss are epiphytes and are not harmful to the oaks.


This hammock is home to some rare big-eared bats, which live in the abandoned trailer (leftover from the ranch). The Conservancy has built this cute new barn red bat habitat, but the bats have not moved out yet. They better hurry before the old trailer with its green roof collapses.


After the oak hammock, we went out to the great marsh. Lots of birds love the wetlands, but we didn't see many at midday. 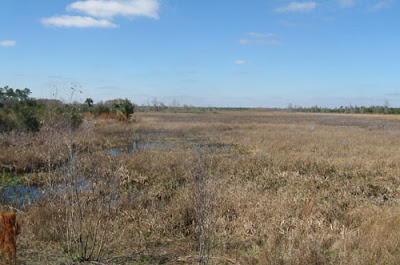 Many acres of marsh had been drained by the ranchers. They'd dug ditches, which effectively wiped out all this marshy area. One of the first things the Conservancy did when they took over the land was to fill in the ditches.

The three aerial photos below tell the story. The 1941 photo on the left shows a lake. The middle photo taken in 1993 shows lines around where the lake used to be which are the ditches. And in the 1995 photo on the right taken one year after filling the ditches shows the old lake filled in the shape of old. After we left the marsh, we stopped to talk to the resident sheriff, who told us about some possible bear markings on a palm tree. He gave Dan good directions. 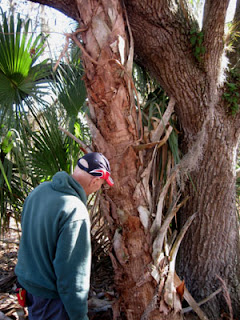 Dan and Erica were quite excited to hear about a bear in the preserve. So we went to the palm to see for ourselves. 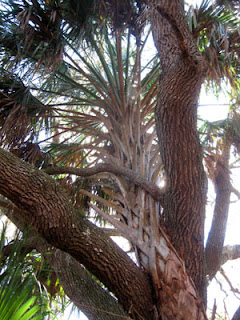 Judging by the height of where something had scraped the boots (left over palm fronds) from the tree trunk, it might have been a bear, but we didn't see any actual claw marks. I was just as interested in the top of this tree and how it and the live oak competed for light and space. 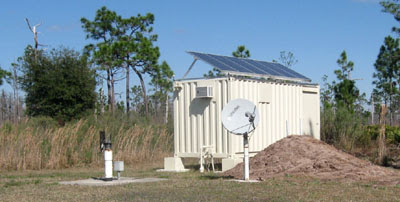 The Conservancy has installed various instruments to measure not only the weather conditions, but also the state of the aquifer, the storage and release of carbon in these natural conditions, and seismic conditions. We've all heard about how native ecosystems sequester more carbon; with the data from these instruments, we'll know for sure.  Impressive. 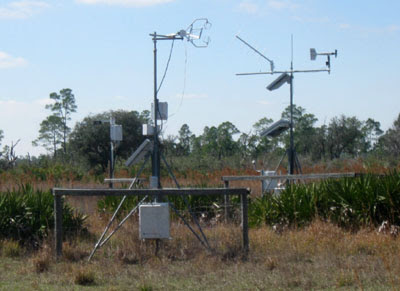 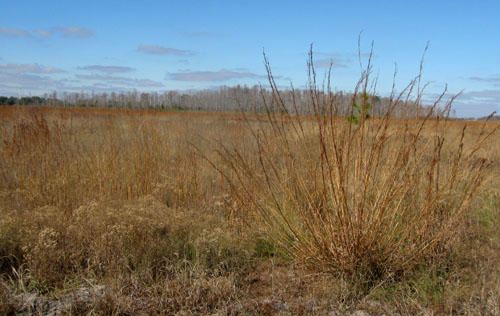 Anonymous said…
Fantastic property. I hope this report encourages folks to donate more to the conservancy.