A Day at the Beech 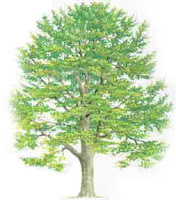 The American beech is a stately tree. Native to North America, Fagus grandifolia thrives in temperate forests in the United States with its southernmost habit in in Alachua County, Florida. (There are other beech species located in Europe and Asia.) Hardy specimens can be found at Mill Creek Preserve, acquired in 2000 through the Alachua County Forever Program. Although the preserve was opened to the public in 2008, a set of new trails were completed in November 2010, and I explored them during the holidays with a group of friends. We strolled through picturesque hardwood hammocks and pinelands, winding around and over Townsend Branch Creek.

One of the most unique features of the trail is the artisan-designed bridge created by welding artist John Patterson. The metal materials were recycled from Alachua County’s road and bridge department. A smaller footbridge was made from the split trunk of an invasive camphor tree that had been removed from another local preserve. 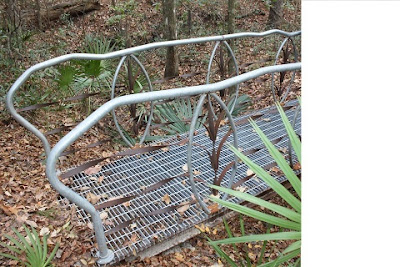 The trails alternate between wide easily traveled lanes to narrower meandering paths that cover a 2.5 to 3 mile loop with benches and interpretive signs, many constructed from logs of non-native invasive trees, various recycled material, and stone.


Although, no one should attempt to harvest any of the beech specimens from this preserve, the American beech, which grows to 120 feet, has long been used for food, medicine, and household materials by native people. A beautiful tree with smooth gray bark, the name “beech” derives from “book” in Germanic and Anglo-Saxon. “Slabs of beech bark were used from early times to write on, and sometimes they were tied together to make the first books.” Although not suitable for building due to the low tannin content and resins, beech wood makes sturdy bowls and utensils (Wells 2010).

The high–protein nuts (22%) can be roasted and used as a coffee substitute, eaten whole, or prepared and ground into flour. Europeans squeezed a vegetable oil from crushed kernels (a rather complicated process, but said to yield a table oil as delicious as olive oil). The triangular shaped nuts are enclosed in bur-like husks with weak spines, each containing 2 to 3 nuts, but are typically not abundant in warmer climates such as north Florida. The young leaves of young plants were eaten raw or cooked as pot herb. For a handful of beechnut baking recipes, including cake and piece, see Angier (1969)

Medicinally, native people used the raw nuts as a worm expellant and the bark tea for lung ailments. An infusion of the leaf was used as a skin wash for burns, rash, and poison ivy.

Please note that before eating or using plants medicinally, you should consult an experienced forager and be absolutely confident in your identification of the plant. In addition plants should not be used medicinally without consultation with an experienced herbalist or physician versed in plant medicine.

Although you may NOT gather nuts or any part of Mill Creek Preserve, you might consider planting beech trees if you live in north Florida. Then you can enjoy the harvest or allow the wildlife on your property to benefit from the good food (the beechnut was a favorite food the now extinct passenger pigeon).

(Note: this article has been updated to correct the range. Thanks to Rufino Osorio for his comment.)
American Beech tree florida native trees

The topic of your blog post, American beech, is native only to Canada and the United States. It is not native to Europe or Asia.