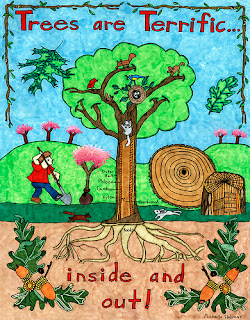 Up in Wakulla County, Arbor Day 2011 was a big success due to the efforts of two groups who joined forces so that they could make a substantial contribution to the goals of the event. The Sarracenia Chapter of the Florida Native Plant Society and the Iris Garden Club of Wakulla County gave away over 500 trees in one-gallon pots this year, despite the really cold weather.
Their collaboration began four years ago when they realized that the little bareroot twigs given away as part of their community's Arbor Day celebration were too small to stand a good chance of even surviving the car trip home, let alone a chance of being planted and growing into a beautiful tree.
So the two groups made a commitment to collaborate that worked so well they have never looked back. The Garden Club put up the funds to buy 900 bareroot native trees from the local AFNN member nursery, Superior Trees. They bought enough potting soil to fill 900 gallon-sized pots. A local nursery operation, Just Fruits Nursery, owned by Ted and Brandy Cowley-Gilbert, who are members in both clubs,  kindly offered space to do the potting, so the two groups met there to really get down and dirty! Once the trees were potted, the nursery also kept them under irrigation for the next 11 months. When Arbor Day came around the next January, some of the faster growing varieties of trees were four feet tall! Those trees were going to go out and get planted!
The trees were carefully chosen to meet the needs of a variety of settings, because Wakulla county includes habitats near rivers, wetlands, high sandy pinelands and coastal terrain. They try to stick to stick to plants that are vouchered as being native to their county, an important effort. Among the  trees they gave away this year: redbuds, Ashe magnolia, bald cypress, blackgum, chichasaw plum, chinquapin, dogwood (Cornus florida), native persimmon, red maple, sycamore, white and shumard oaks, southern red cedar and sabal palmettos, an impressive list.
The collaboration continues on Arbor Day, when both groups are present to help people choose the right tree for their own yard. A bake sale and raffles are held, and toward the end of the day extra trees are available for purchase for a $3 per tree donation toward Arbor Day expenses. This year these combined funds brought in enough to pay for next year's trees, already slated for potting soon.
Great story of thinking outside the box and forging new bonds to make change for good!
Thanks to Jeannie Brodhead, Sarracenia Chapter Rep, for her help with this post.
sue dingwell
Arbor Day florida native trees

Meems said…
What a great way to share a tree. We get up to Wakulla county often and love to visit local garden centers ... Tallahassee Native Nursery and Just Fruits & Exotics are my two favorites!Always find something there we don't carry here in central Florida.
Meems @ HoeandShovel
January 24, 2011 at 8:06 AM

Florida Native Plant Society said…
Meems, thanks for your visit! We enjoy both of your blogs, too; such wonderful photos. You really capture the beauty of "La Florida!"
January 24, 2011 at 11:02 AM