December 14, 2010
Native plants make nifty wreaths! The FNPS's Conradina Chapter was creativity in action Monday night as the members, along with their friends from local garden and herb clubs,  joined in a convivial group to fashion wreaths and other seasonal decorations using native plants.

As you will soon see, a wide variety of methods and styles, both conventional and un,  were successfully employed.

Martha gave snippets of information with many of the plants: coontie and spanish moss were among Forida's first cash crops. Simpson's stopper is sometimes known as Naked bark because on a mature tree the bark will form deep fissures and peel. Yellowtop, if it is still in color at this time of year, will hold its color after you pick it. Both sides of the Satin leaf are beautiful in a wreath, the deep green top, and the bronze underside.


These plants will hold up in a dried arrangement for about a week to ten days, explained Martha. Put the big things on first! And with that, we began.

As I made the rounds, watching how people started out, I could see that some were working with a vision, and some were just letting the plants tell them where they wanted to go.  There were several gentleman in attendance, but only one was actively engaged in the process. Robert Wicker and his mom, Helen, both long-time FNPS members. were working as team. As I wandered by, Robert looked at their mostly-bare wreath and told me he was making a nativity scene. I smiled and nodded encouragingly. "I already have the three wise men," he told me. He grinned as he held out three small pine cones. I laughed and walked on. Imagine my surprise when I returned at the end of evening to behold, indeed, the first nativity scene wreath I had ever seen. 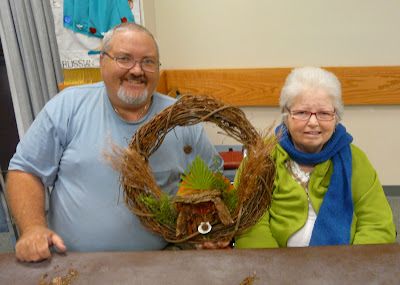 Above the little stable is a palm frond with the hair cut Martha demonstrated. Who would have guessed?! Nice work, Robert and Helen!

A full, lush look was favored and well-executed by members Ethel Worrell and Hedy Von Achen. Here is Hedy's at the end of the night. 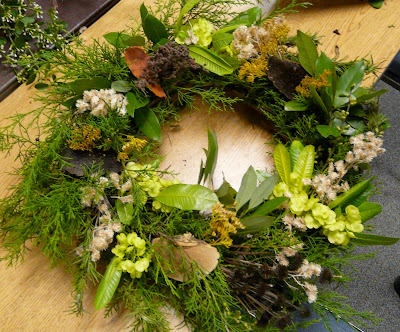 Now that's a wreath to rival any.  And all native! Another ingenious creator, Scarlet Romine decided to make a wreath and matching earrings; another first in my experience! 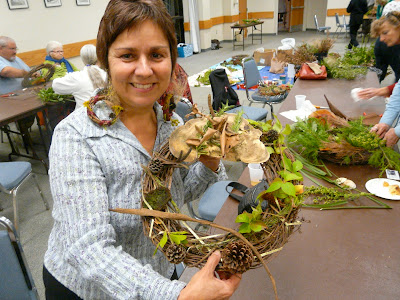 Scarlet used a large piece of fungus very effectively at the top, and don't you love the way she got the movement to extend off the confines of the circle?

Another family team was Imogene Sherwood Davies and Deborah Powers. Imogene told me to tell you that she was having fun. In fact, "Whoopee!" was what she said. You can see what a perfect accent the fall-touched sea grape leaves make on her wreath. 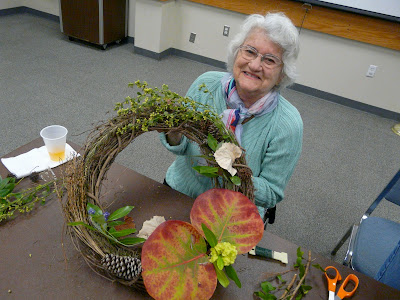 Some of the other members in attendance were Michele Marcotte, Maren Laudr, Dawn Tepperman, Viola Knudsen, Carol Herbert, Vince Lamb, and Sharon Dolan and Eileen McGurk. This chapter really has a good time when they get together!

A lot of these beautiful wreaths!
Nice work! Creative.
Made with native plants, sustainable manner.
Congratulations!

Elizabeth said…
Wow - what a wonderful and creative project! I love all of the different colors, shapes, and forms in these - they all turned out beautifully!
December 16, 2010 at 9:10 AM