November 14, 2010
Okefenokee Gold  by Pete Johnson, Ixia Chapter
On Saturday November 6, 2010, the Ixia Chapter and Sea Oats Chapter took a joint field trip to the Okefenokee National Wildlife Refuge (ONWR), East Entrance. The trip was well organized by Ixia president Barbara Jackson, who coordinated with Okefenokee Adventures to guide us on a boat tour. The turnout was big enough to fill four boats with eight people in each boat. The boats can hold more than eight, but the water level was very low due to lack of recent rainfall. The owners of Okefenokee Adventures, Chip and Joy Campbell, and their staff are courteous and very knowledgeable naturalists. They also run a great gift shop and lunch counter at the boat basin inside the ONWR.
Chip guided the boat that I rode in and explained the Okefenokee is not just a swamp, but a peat bog system of wet prairies, marshes, cypress and hardwood swamps, and upland islands oriented generally northeast to southwest. The ONWR and contiguous conservation buffers make up approximately 420,000 acres! This enormous wetland system contains mildly acidic water resulting from tannic acids produced during vegetative decomposition. Since the formation of the Okefenokee around the beginning of the Holocene epoch (12,000 years before present), it’s acidic water has continued to dissolve away the underlying limestone base, a little more to the southwest, causing it to drain mostly out through the Suwannee River. Only a small portion of the Okefenokee drains into the St. Mary’s River to the east. This is just a small taste of the well articulated information that Chip provided in an animated, engaging fashion. He really knows and loves the Okefenokee!

You can find out more information about the ONWR at http://www.fws.gov/okefenokee/. I suggest downloading the USFWS Comprehensive Management Plan for the ONWR, because it contains the most useful information for an informed visit to the refuge. I printed out an extensive plant list that was quite useful in guiding and narrowing down plant identifications during and after the trip. 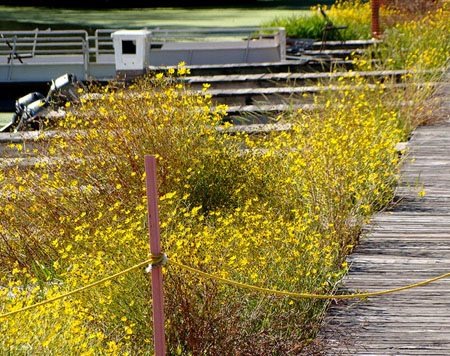 I bet other chapters and their member also have good stories to tell, so let us know.

Elizabeth said…
Beautiful photos! Thanks for the comparisons of the sepals; I enjoy learning bits of botany like this.
November 15, 2010 at 11:39 AM

Anonymous said…
Those DYCs (darn yellow composites)! There are sooo many and so hard to tell them apart, but this post makes these two crystal clear. Thanks.