October 26, 2010
Search and destroy!  This was the mission for four hours on a Sunday afternoon, carried out by a group of 12 teens and 6 members of the Ixia chapter of the Florida Native Plant Society, covering Duval, Clay & Nassau Counties.  The teens were members of the Jacksonville Teens Volunteer program, which is sponsored by the Jewish Community Alliance (JCA), and earned four hours of community service, plus they learned a lot about invasive plants. 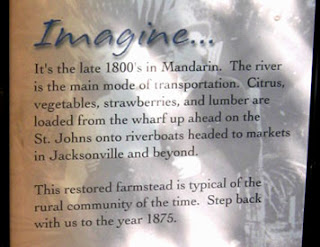 Walter Jones Historical Park, on the eastern bank of the St. Johns River in the Mandarin section of Jacksonville, houses a restored farmhouse and various outbuildings.  There are some remaining citrus plants and other cultivars left over from its farming days. For more information, visit http://www.mandarinmuseum.net/.

Pete Johnson, conservation chair for the Ixia Chapter of FNPS, lives nearby and had noticed the large number of invasive plants on this property.  He worked with Andrew Morrow, executive director for the Mandarin Museum and Historical Society and Betsy Miller, JCA Youth Services Director to coordinate this project.

Andrew said, “I’m excited that we could coordinate this effort work on our invasive species problem. Many folks who come through Walter Jones Park look around at all the beautiful plants and do not realize that many of them don’t belong in the natural environment that we would like to depict.” He noted the City of Jacksonville had previously conducted one program to eradicate the camphor trees that are in the park.

“Invasive species takes a lot of work to get rid of,” he continued.“We’re going to have to hit them again and again over several years before they are completely removed. And then we still have to be vigilant so they don’t pop up again.”  This was part of that effort.
﻿﻿﻿﻿ 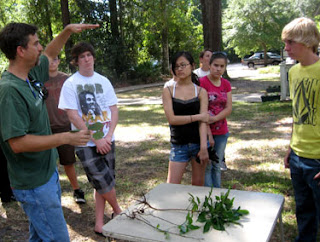 Several members of the native plant society started early and marked quite a few of the invasive plants with pink tape so the teens could see which ones were to be pulled up. 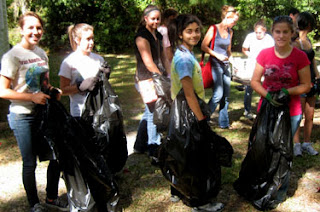 The teens each have a big plastic bag and a pair of work gloves and they're ready to go.

Betsy Miller of JCA said, “This program not only promotes healthy relationships but also gives youth the opportunity to fulfill their community service requirements needed for graduation as well as credit towards a college scholarship.”
The JCA’s Jacksonville Teens Volunteer program meets once a month during the school year. The volunteers meet at different non-profit locations and help with a variety of projects.  On on this October afternoon they were ready to pull out invasive plants. 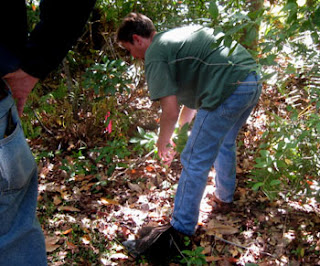 Pete gives a demonstration about how important it is to pull up the roots and not just break the plants off.  He explained that they'd grow back again very quickly and make their work less valuable.

Here he pulls up a coral ardisia plant. 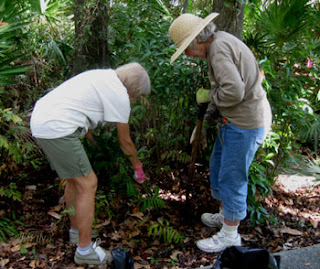 Teens weren't the only ones doing the work; FNPS members removed a fair number of invasives as well.
A true team project!

Some of the students wondered whether there was an easier way to accomplish this task.  After an in-depth discussion, they agreed that there is no real substitute for hand pulling and judicial herbicide application to larger plants. 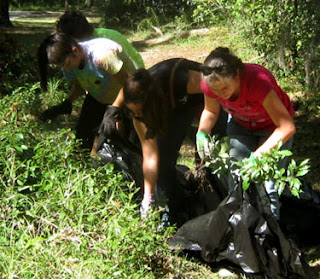 These four girls spent quite a bit of time pulling up mostly camphor trees in this area, which were so thick that they acted like a groundcover.  In other areas, the camphor trees are suckers from stumps where larger trees had been removed previously.  As Morrow stated, fighting invasives is a long term project.

These girls said that they were going to earn more than 75 community service hours this year working on projects like this.  ﻿﻿﻿﻿﻿Maybe they'll come back and pull more invasives here in a few months. 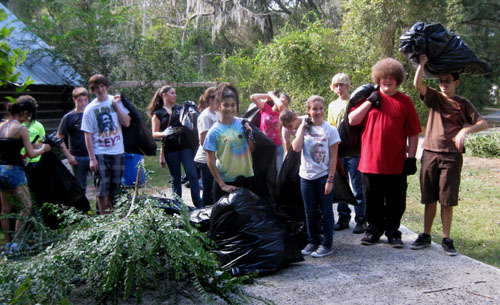 A job well done!  Fifteen bags were filled with invasive plants and sealed tight so none of the berries or small trees could be inadvertently planted at another site.  These bags will go out with the trash, not the yard waste--we don't want to create new problems.﻿
﻿﻿﻿﻿ 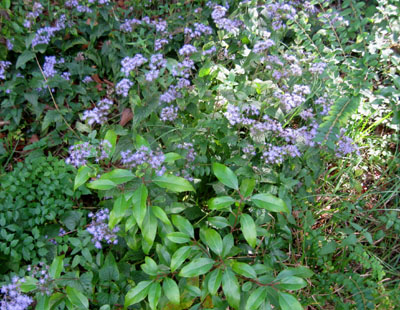 More work remains to be done at Walter Jones Park.  Amongst the native mist flower (Conoclinium coelestinum) are Japanese wisteria, camphor trees and Chinese privet.  Can you spot them?  By the end of the afternoon, the teens from JCA could.  Thanks to all.
Does your FNPS chapter have stories like this that you'd like to share?  Let us know.
Ginny Stibolt
﻿
Go to the FNPS website for information on your local FNPS chapter's activities. Also see details on the FNPS's annual conference in May 2011. This year it's in Orlando; it will be fun and educational. We hope to see you there!
Florida Native Plant Society FNPS projects invasive species

Anonymous said…
It's great to see kids involved in positive activities--adults, too. There's too much negativity floating around these days.

Thanks for posting this.