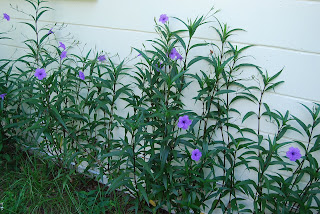 Ladies and gentlemen of the jury: before you today stands the Mexican petunia, Ruellia simplex, of the family Acanthaceae, a blue, long-flowering plant used copiously in landscapes throughout Florida. What we will attempt to show you today, is that this plant, which invaded our fair state from foreign countries, is not a part of a sustainable ecosystem here, and in fact, has gone rogue with deleterious effects in a wide variety of habitats.

In other words, it may look good, but it's a bad choice. In fact FLEPPC (Florida Exotic Pest Plant Council) has listed it as a category one invasive plant. This bad actor goes by many names: Ruellia tweediana, Ruellia brittoniana, Ruellia coerulea and Ruellia malacosperma are all names for the same culprit. In case you've forgotten, a Category I invasive plant is found doing some or all of the following:
This rogue plant has many tricks up its sleeve. Ironically, although it prefers wetlands, it's highly drought tolerant once established. And get this: the seeds have no dormancy mechanisms, they are ready to germinate almost immediately after leaving their insidious little fruit capsules. No need for cold-treatment, scarification or stratification. Germination occurs over a broad range of temperatures, with or without light.


Florida is not the only state that is regretting its existence, either. Mexican petunia has established itself in nine states from South Carolina to Texas, and is marginally hardy through Zone 7. The FLEPPC Database reports  presence of Ruellia t. in five different Floridian community types:  pine flatwoods, hardwoods, (hamocks, tree islands) freshwater marshes, river banks, springs, and salt marshes. That's a lot of territory! Wildflower expert Carl Terwilliger found entire fields near the town of Clewiston completely overtaken by Ruellia t. over 20 years ago, and has seen it recently right in the Fakahatchee Strand. Further north, please see evidence pictured in link,  as it invades Paynes Prairie Preserve State Park, and forms a complete monoculture-groundcover under the tress there: http://edis.ifas.ufl.edu/ep415.

And here’s a corker. Elastic energy stored in the seed capsules becomes converted to kinetic energy, or movement when the seams of the two halves of the capsule dry out; and when that happens, POP goes the weasel. I mean the petunia seed. This means seeds can be virtually sprayed out for distances up to ten feet from the mother plant.  Add to this the fact that the plant forms dense colonies from horizontal stems both above and below ground...and you have rampant roots shoving the plants in clumps outward with seeds are being sprayed all along the front lines as it proceeds.

Plus mucous. Yes. The lucky little kinetically loaded seeds come pre-packaged with a mucous gel coat that forms when the seed becomes wet. Now it is capable of floating in water, and also will become glued to the soil when it lands there.

You will not be surprised to learn that Mexican petunia is extremely difficult to get rid of. The underground stems are nearly impossible to remove completely, and the seeds persist in the soil for years.

“The largest problem I see about trying to curb the use of Mexican petunia is that people have a reasonable expectation that when they buy a plant, it will do no harm to natural areas.  There's no warning label that this plant is a Category 1 Invasive Plant. When everyone finds out that it spreads uncontrollably, is hard to get rid of, and devastates natural areas - they wish they had not planted it.

Cities and counties knowingly or unknowingly spend tax payer dollars planting this non-native, invasive Ruellia in right-of-ways while state level tax dollars are spent to eradicate it from nearby natural areas.

The list of commonly planted invasive species must be publicized more to the general public, and we need to give out special certifications to nurseries that hold up a standard by offering for sale only those plants that are not on the Invasive list."

That sounds like a good idea. Catch Kariena at the Wildflower Symposium this coming weekend in  Winter Park, where she will be speaking on Native Wildflowers In Landscape Design. A fantastic opportunity to learn from a pro about native flowers will adapt well to a cultivated setting.

Now that the serious "caution" flag is up, we can tell you that the University of Florida has developed  one cultivar, called "Purple Showers," that is sterile, (won't set seeds) and has been found not to be invasive.  U of Fl.  featured Purple Showers recently in its “Gardening in Minute” series, in both print and radio podcast:

They also mention the native wild petunia, Ruellia caroliniensis. This is truly a blue-flowered beauty, and worth the trip to a native nursery. AFNN.org  is a good source for locating native plants you will never regret planting.

In summary, members of the court, we ask you to find for Truth, Justice and Sustainable Ecology
by condemning the invasive Ruellia simplex, britonnia, tweediana et. al. to plant prison for eternity and to pledge to plant native in the future!

Ginny Stibolt said…
We had Mexican petunias when we moved into our house six years ago. I'm still pulling it out today. Ugh!
September 21, 2010 at 1:33 PM

Terra Mirabilis said…
I put this in the garden at the request of my husband, who thought it was lovely. That was getting on for 10 years ago and it's still here and I'm still pulling it out. Now I can tell him it's an invasive and it's going. Hooray!

Unknown said…
Why on earth would it be legal to sell a Class 1 invasive species? Especially, when there are sterile ones out there http://floridafriendlyplants.com/Blog/post/2010/08/29/Purple-Showers-Mexican-Petunia-The-Sterile-One.aspx
September 21, 2010 at 6:51 PM

Rufino Osorio said…
Mexican-petunia has a very confused taxonomic history. It's name keeps changing because botanists keep finding earlier names (according to the rules of botanical nomenclature, an earlier name trumps a later name, even if the later name is well known and well established). Ruellia tweediana was published in 1879. Now, an even earlier name has been discovered (this is not unusual since sometimes plant names are published in extremely obscure journals). It has been found that C. Wright named this plant Ruellia simplex in 1870 and Ruellia simplex is the name that this plant appears under in Wunderlin's Atlas of Florida Vascular Plants. So, in the 20 years that I've been here, Mexican-petunia has had three names: first Ruellia brittoniana, then Ruellia tweediana, and now Ruellia simplex. Let's hope no one finds an even earlier name!
September 21, 2010 at 7:27 PM

Ginny Stibolt said…
Rufino, thanks for the details on the taxonomy. Sometimes it's hard to keep up.

We should write a post on Florida's wonderful plant atlas, but until then, here is the link: http://www.florida.plantatlas.usf.edu/
September 22, 2010 at 4:15 PM

Anonymous said…
I bought one plant from Lowe's 10 years ago. Now I have them growing like weeds. They take over everything. Will Honcho or Remedy kill them?
March 12, 2013 at 11:09 AM

Florida Native Plant Society said…
I'd hate to tell you to use those products, but if pulling them all is an impossibility, then the lesser of two evils is Honcho (aka Glyphosate), as it supposedly has no sol activity. Still, be careful of the wind when you decide to hit them with this product. Sounds like you have learned the hard way about invasive plants sold at big box stores :( Sorry.
March 13, 2013 at 12:51 PM

Anonymous said…
Even the so-called sterile "Purple Showers" are a mistake: they may not throw seeds, but they are hopelessly invasive. If I could go back in time, I never would have planted these as a shrub all around our front & back yards.
September 22, 2020 at 10:25 AM