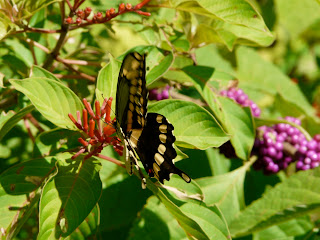 What we unwittingly released was a  firestorm when we published the butterfly release piece last week. Turns out there is a  dark side to the practice, and we want to share with our readers what we have come to know.....and hey, folks, this is one of the reasons the blog exists! It gives us a great forum to talk with, question, and learn from each other!

The butterfly world is kind of divided in two camps on this issue. On one side are members of IBBA, the International Butterfly Breeders Association, who say that the practice of releasing butterflies is safe, both for the butterflies themselves, and for their impact on the environment they enter. On the other side are a number of people, including members of the Xerces Society, and the North American Butterfly Association (NABA).

Xerces is  a nonprofit organization that protects wildlife through the conservation of invertebrates and their habitat. The Xerces site is very informative, and one of the things you will note if you go there is that they have a very long list member contributors who hold advanced degrees across a wide spectrum of the sciences. Xerces and  NABA  are united in their position that releases are cruel to the insects and also present a long-term hazard to native butterfly populations.

One major concern is the spread of disease from the commercially raised insects to the wild ones. IBBA contends that there is no data to support that worry. However, Xerces points out that the same claim (no supporting data) was made by two groups recently where harmful results did occur while we were waiting for the statistics to come in. Four of our North American bumble bee species are on the brink of extinction;  the most likely reason of their decline is a pathogen which was brought to them from  commercially reared bumble bees. And, in 2001, a sea lice epidemic spread from commercially produced salmon to wild populations in British Columbia. The warnings of conservationists had been ignored, and the wild salmon runs declined by 95%. So while it may be true that there is no supporting data for spread of disease,  the likelihood is high. Pathogens are hard to detect and there are no regulations preventing mailing unhealthy butterflies. Since the results of releasing practices are unstudied and unknown, caution seems wise. You as a consumer have a choice.

Also, the releases, which have become increasingly numerous, wreak havoc with researchers’ efforts to track the “biogeography” (Isn’t that a great word?) of butterflies. This makes it difficult to determine their conservation needs. It interferes particularly with understanding the migration and overwintering habits of the Monarch. Monarchs and Painted ladies are the most popular species for use in releases. As native plant afficianados, we have a special understanding of the issues relating to provenance. It follows logically that the same issues pertain to insects.

Then there is the whole philosophical question of whether or not the release of butterflies for our personal pleasure is a practice that we should enjoin. The very fact that butterfly releases have become such big business means that now poachers have entered into equation, selling to others what they have stolen from our natural areas.  The IBBA folks state their belief that releases will cause people not only to appreciate butterflies more, but also to learn more about them and to be motivated to protect the natural world. Unless the butterfly releases are accompanied by specific educational components, this is just plain wishful thinking. Which brings us to the final point.

There are detailed directions on the IBBA site explaining how to stage an optimal release from the butterflies’ point of view. These include releasing on sunny days, in windless areas like a small garden, near nectar sources, and not more than two hours before dark so the the creatures have time to locate and fly to nectar and hiding places.

How many times do you suppose all these things actually come together? And if someone has purchased the butterflies for release at a certain time, how often to you suppose they will change the time for the butterflies’ sake? And all this is assuming that nectar sources of an appropriate kind will be present at all. Xerces and NABA point out that birds have been protected from such release treatment since 1947, and that it is time to extend the same kind of concern for butterflies.

Both groups make some exceptions for uses in science and environmental courses in schools, if strict guidelines are followed.


You can read more details on the negative effects of butterfly release on the Xerces Society Policy page.  NABA has a great article entitiled “No Need to Release Butterflies - They’re Already Free.” They recommend “releasing” rose petals as an alternative. Sign me up for that one!

And what about the use of non- native scarlet milkweed? Stay tuned!

Ginny Stibolt said…
What I heard from an expert is that the butterfly farm that was featured in that newspaper story is well-run and the butterflies are well-cared for. For instance, they hand feed each butterfly before shipping so they arrive in much better shape. Just like plants, if the butterfly is well-cared for, it's less likely to become infected.

Here's a thought: The environmental harm caused by releasing helium-filled balloons into the environment is well-documented. Maybe butterfly releases offer a less harmful alternative.
October 1, 2010 at 6:01 AM

Anonymous said…
yes, interesting. how many butterfly lives should equal a fish? how many should equal a turtle? how many a bird? Here's a thought from Christina Rossetti -Hurt no living thing
Ladybird, nor butterfly,
Nor moth with dusty wing,
Nor cricket chirping cheerily,
Nor grasshopper so light of leap,
Nor dancing gnat, nor beetle fat,
Nor harmless worms that creep.
October 1, 2010 at 12:54 PM