Butterfly Bonanza at the Florida/Georgia Line

September 23, 2010
"Butterfly bonanza" was the report on a recent field trip to Simmons State Forest by the Ixia Chapter of the Florida Native Plant Society.  The members of this Jacksonville group identified 26 different butterflies and were treated to a rare sighting of a Cofaqui Giant Skipper, which they even caught on camera - see below!   If your group has been on an interesting adventure and you have good photos of native plants or wildlife (like Bill's fantastic skippers) let us know.  We'd love to post it here.   Ginny Stibolt

Waving hands, Cheshire smiles were aglow as I was greeted by 7 other members
of the Ixia chapter at the Burger King parking lot in Callahan. We headed North to Ralph E. Simmons Memorial State Forest. We picked up another Ixia member on the way and had a "TWO CAR" caravan.


Located in Nassau Co. in Northeastern Florida on the Florida-Georgia border, this 3,638 acre State Forest features many excellent examples of natural communities including longleaf pine/wiregrass, low pinelands, seepage slopes, herb bogs and ravine communities.
Reaching the Road 2 entrance into Simmons S.F., we were greeted by a huge "King Ranch" edition black truck pulling a large trailer full of hound dogs, and four or five horses with riders in traditional dress and appointments. Their leader said they were Cubbing. www.foxhunter.com
Finally getting by all the commotion, we stopped at a spot where you can observe Frosted Elfin butterflies in March. 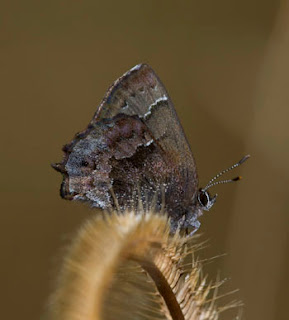 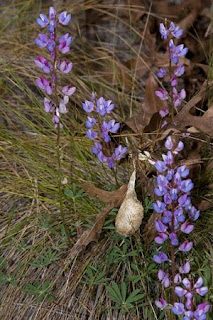 Sundial Lupine (L. Perennis) leads to the fragile status of this butterfly. 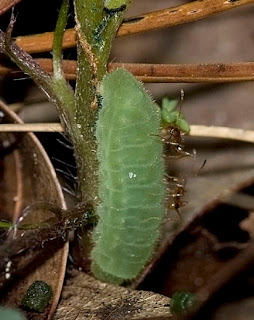 This butterfly's caterpillar allows ants to crawl over its body, and to pupate below the surface which can allow them to survive seasonal burns that can kill other species.

Pete Johnson located the early growth of Sundial Lupine on a small isolated sand pile, along with a very dark tan to black colored Eastern Coachwhip snake. Later I located L.Perennis in bloom (seems odd as it normally blooms late March early April) which was a crowd pleaser.
A mile or so down the road we parked, then prepared for a 1 mile plus hike down a sand hill slope, leading to a smaller seepage slope trail, ending in a bottomland forest with seasonal water filled creek.
This trail features flowers (Genus: Diodia) that draw in various butterflies and other North Florida pollinators. One of the first butterflies we see is a very small, dark colored skipper darting around, YEAH, it's another FNAI state ranked S1-S2 butterfly, Dusky Roadside-Skipper! 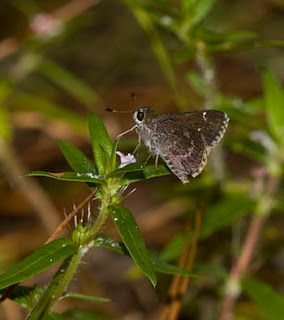 And there are two of them. What a great way to start a hike.
The "DIODIA" trail was hoppin, including 6 more Dusky Roadside-Skippers, 26 different butterflies for the day.
Then "It" Happened. We spotted a heavy bodied butterfly, ventrally, dark frosted, whose bold, bright yellow dorsal markings flashed up and down as she flew across the trail, landing about 6 feet off the ground on the trunk of a long leaf pine. 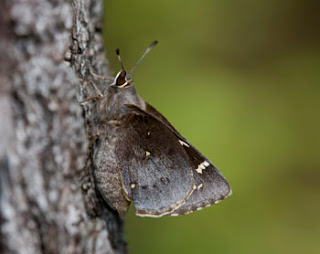 HOLY COW, got to work fast, grabbed the camera, three shots, she's gone. Rare and elusive, the adults of Cofaqui Giant-Skippers are active mainly at dusk, sometimes displaying in open areas, where the participants fly in low circles of decreasing diameter. If "crossed" they initiate high-speed aerial dogfights.

Reaching the bottomland forest, you realize how little filtered light gets through the forest canopy. This area was home to a small cane break, Switchcane (Genus: Arundinaria ) a small bamboo in the grass family (Poaceae) it is the host plant for Lace-winged Roadside-Skipper, Clouded and Delaware Skippers, and Southern Pearly-Eye.

I pointed out a huge tree (Genus: Celtis) which is the host tree for Tawney and Hackberry emperors, Question Mark, and Snout butterflies. Returning back to the cars we had lunch, found one Giant Skipper egg on Yucca Filamentosa, then motored over to the power line road entrance into Simmons S.F. scaring up a Common Wood Nymph along the way. 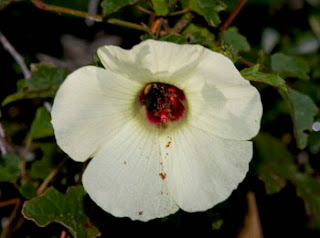 Many blooms of Comfortroot (Hibiscus Aculeatus Walter) were enjoyed by all.
Thanks to Jake Ingram for the ID.
We ended the trip at the St. Mary's River edge, talking about kayaking the river, all the beautiful images one could capture with their camera, and all the really cool looking driftwood strewn along its sandy banks.
field trip Florida Native Plant Society florida native plant. butterflies skippers

Terra Mirabilis said…
I very much enjoy your blog. It's got a lot of useful info.

As an FYI, I recently posted on mine about getting a Florida Friendly Yard certification, which you might like. I've also just posted about saving a monarch caterpillar from the bufo toads that lie in wait from them.