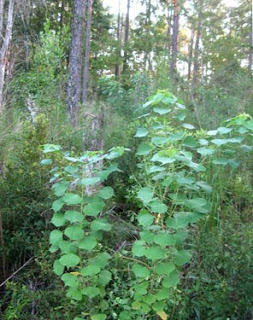 A pine forest in my neighborhood suffered a hot fire that killed most of the pines when an abandoned building caught fire. The palmettos sprouted first after the fire, but the next plant in evidence was a carpet of Chinese tallow tree seedlings. Now three years later they are the dominant tree in this new growth. The Chinese tallow or popcorn tree (Sapium sebiferum) was imported in the 1700s by Ben Franklin himself. It is a nice-looking tree with its heart-shaped leaves and reliable fall color even here in Florida.  Of course, birds just love the seeds and spread them far and wide. Now it's on Florida Exotic Pest Plant Council's (http://www.fleppc.org/) most invasive list for all of Florida.  So we all need to get rid of it and object when we see stores selling it.

Even if a plant is not aggressive on your property that doesn't mean that it's not invasive and the reverse is also true. Here in Florida heavenly bamboo (Nandina domestica) is also on the  most invasive list for northern and central Florida, but you could hardly tell by its behavior in your yard. Also if it's native like catbriar (Smilax spp), it is by definition not invasive, even if it's aggressive  and you're having a hard time getting rid of it because of those enormous woody tubers. Maybe you could learn to make sarsaparilla: haven't you noticed that spicy smell when you dig them up? It's not called root beer for nothing.

As folks interested in promoting native plant species, aren't we also interested in ridding our wild areas of invasive species that have invaded? And shouldn't we start with our yards and spread the word? Here is a recent discussion on Garden Rant about invasives. While porcelain berry (Ampelopsis brevipedunculata) is not a problem here in Florida, the discussion, including the 28 comments, is quite interesting and educational


The Ixia chapter of FNPS in Jacksonville has created a brochure called "Alter-Natives," which includes a list of native alternatives to commonly planted invasives in northeastern Florida. As alter-natives for Chinese tallow, it suggests Florida sugar maple (Acer floridanum), Chickasaw plum (Prunus angustifolia), and blue beech (Carpinus caroliniana).  Here's a link to the front & back and here's the link to the inside.  Maybe other chapters could come up with their own regional versions as a "nice" way of spreading the word.

Anonymous said…
I love the idea of the alter-natives brochure. Can I print some out to give to my neighbors and at the HOA meeting?

Gail Fishman said…
Right on Ginny! We need to make sure Florida homeowners know what a problem invasive exotics are and how to get rid of them. We need stronger LAWS to prohibit their sale and propagation. Invasive plants are everyone's problem and everyone's responsibility.
August 22, 2010 at 8:38 PM

Ginny Stibolt said…
Yes, Gail. We do need laws. But we don't have to wait for our representatives to pass some invasive laws with teeth, we can take individual actions now and pass the word.

V.Avery has the right idea. Print out that brochure, if you're in northeast Florida, and provide it to local organizations and local politicians. Maybe we can get some of the towns and counties to plant more appropriate plants on public property. Providing education material like this is part of FNPS's mission.
August 22, 2010 at 9:03 PM

Anonymous said…
Good for you pointing out the differences between Invasive and Aggressive. Down in SFL there are aggressive natives such as Vitis rotundifolia & Ipomoea alba, however natives should never be termed invasive. Steve W.
August 23, 2010 at 11:48 AM