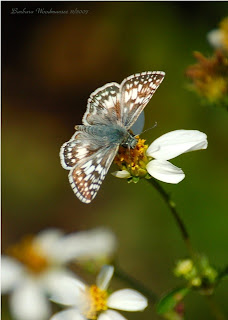 Okay folks, hold onto your hats.  A reality which may shock many of you is that weedy lawns support a greater diversity of butterflies than most standard butterfly gardens. (I am sorry, but it is true.) Sure they aren’t the flashy “macros,” but weedy lots are well known for being great places to see the smaller, sometimes rarer, butterflies such as skippers, hairstreaks, sulphurs, whites, and blues. The photo here shows a common checkered skipper nectaring on Spanish needles, a common lawn plant.
My own lawn (which I now call an Urban Meadow) contains a diverse weed assemblage that supports up to 36 butterfly species.  Even St. Augustine grass (Stenotaphrum secondatum) supports six different species of butterflies (uh oh) including Sachems, Carolina Satyrs, Clouded skippers, Eufala skippers, Southern broken dashes, Fiery skippers, and Whirlabouts.  The non-native Bermuda grass (Cynodon dactylon) also hosts six species of butterflies including Sachems, Obscure skippers, Baracoa skippers, Eufala skippers, Southern skipperlings, Fiery skippers, and Whirlabouts.  I bet though, that other native grasses support the same species, but haven’t been documented doing so yet.
Some other lawn weed hosts and their butterflies are:  Spanish needle (Bidens alba var. radiata) which is host for dainty sulphurs, Pencil flower (Stylosanthes hamata) a host for barred yellows, Common fan petals (Sida acuta) hosts Martial Scrub & Gray hairstreaks and Common & Tropical Checkered skippers, Virginia pepperweed (Lepidium virginicum) hosts Great Southern & Checkered whites, and the non-native Trailing Indigo (Indigofera spicata) hosts Zarruco skippers, Ceranus blues, and Gray hairstreaks. Many of these lawn weeds are also great nectar sources.  All these facts may be obtained from Minno et al. (2005) Florida Butterfly Caterpillars and Their Hosts.

So are we better off digging up our lawns in order to create butterfly gardens?  That depends if you have a nice weedy lawn or not.  To have your own urban meadow, you will need to stop watering, skip the pesticides & fertilizers, and hopefully mow less frequently using a push reel meadow (lawn) mower (non gas powered/non electric). 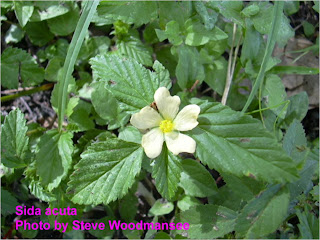 So what is one to do if the desire is to attract butterflies and to get rid of the lawn?
Landscape by habitat instead.  Rather than planting a butterfly garden, go ahead and restore historic pine woodland or prairie in your yard.  Both are open habitats that contain a plethora of butterflies in addition to other insects, spiders, and wildlife.  Restoring natural communities historic to your area greatly assists plants as well as wildlife, and if done correctly, will attract all the “Macrobutterflies” in addition to the smaller gems.  The key is diversity.   Choose species that are “lynchpins” to the community being created. Augment with additional vines, grasses and forbs native to your area.   Be careful not to plant too many trees and shrubs or you’ll crowd out other forbs and grasses.
You may run into problems finding the correct species.  In that case, you can encourage native plant nurseries to grow them, or try growing them yourself.  No one thinks about planting grass to attract butterflies, but many of the smaller skippers host on our native grass species.  Water features such as ponds are also great additions.  With a diverse assemblage of natives you will be able to focus on host plants for the more unusual butterflies, provide adult butterflies with a varied diet and you will see these and other insects visit in great numbers. This will inevitably attract additional wildlife such as birds, snakes, and lizards. 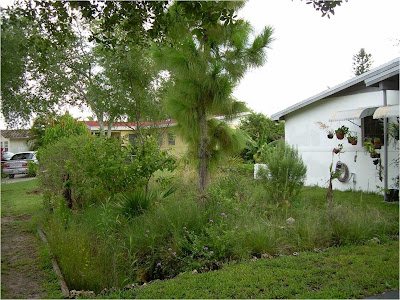 Here is a four year-old Pine Rockland Habitat in the middle of suburbia. Note that a few trees and shrubs are present while native grasses are dominant.

Also, try to focus on additional insects such as bees, wasps, and moths.    Native palms (especially saw palmetto and cabbage palm) are both great insect attractors and butterfly host plants.  Some moths are diurnal, such as the rattlebox moth, and have caterpillars like butterflies.  About an inch long, the rattlebox moth is showy, pink, and hosts on Dwarf rattlebox, Rabbit bells (Crotalaria pumila, and C. rotundifolia), the latter having a broader range in Florida.  Members of the Apocynaceae (dogbane family) also attract a great number of diurnal moths such as Oleander moths, Faithful beauty moths, and various other wasp moths.  Host plants for them include Wild allamanda (Pentalinon luteum), Devil’s potato (Echites umbellata), and Pineland allamanda (Angadenia berteroi).  Make an effort to stick to things native to your area, not just native to Florida
. 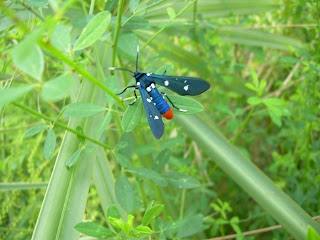 This Polka Dot Wasp Moth was photographed in the above pine rockland habitat.
In summary, butterfly gardens are a great beginning and a way to reach out to the non-nature oriented.  Thanks to my mom, I myself grew up “raising” monarch caterpillars in a brandy snifter covered in panty hose.  They may even be more appropriate for more formal/less diverse landscapes.  Eventually, though, holistic approaches to landscapes are what are needed to create a sustainable yard, not to mention a sustainable planet. By restoring habitats historic to your area, you are doing just that.
Steve Woodmansee
Owner/Biologist
Pro Native Consulting
Miami, FL
butterfly gardening habitat landscaping

Anonymous said…
Steve, I'm so glad to see you look at the big picture. After 3 years of trying a butterfly garden, with not a lot of success, I visited a butterfly farm and was shocked to see them using mostly non-natives.

I think, yes, restoring with as broad a variety of herbaceous plants appropriate the county and to the habitat is the answer. That returns to the land what was here and should be here again. The wider the plant range, the better the support of all animal species. A

After those 3 years of butterfly gardening, my greatest joy is one I didn't know I'd get - the ten zillion insects that come to the Monarda. I go out several times a day to see all the little critters there. Thanks for your words and for "outing" some of the benefits of what we consider weeds. Well done.
June 12, 2010 at 2:42 PM

Florida Native Plant Society said…
Thanks for the comment!
This information should assist all those folks who are asked for help from various community groups wanting to establish a butterfly garden. I know that in my chapter, also in So. Fl. we get so many requests we can't help them all, and lots of them don't know much about plants. This type of garden would be much more successful for them.
June 12, 2010 at 9:19 PM

Ginny Stibolt said…
Steve, you make a good point about letting parts of the yard go natural. The majority of the volunteers in my yard are native: the bugs and their predators love it.

I wrote an appreciation of the bidens in my yard a couple of years ago. Here's the link:
www.sky-bolt.com/beggarticks.htm
June 13, 2010 at 6:03 AM